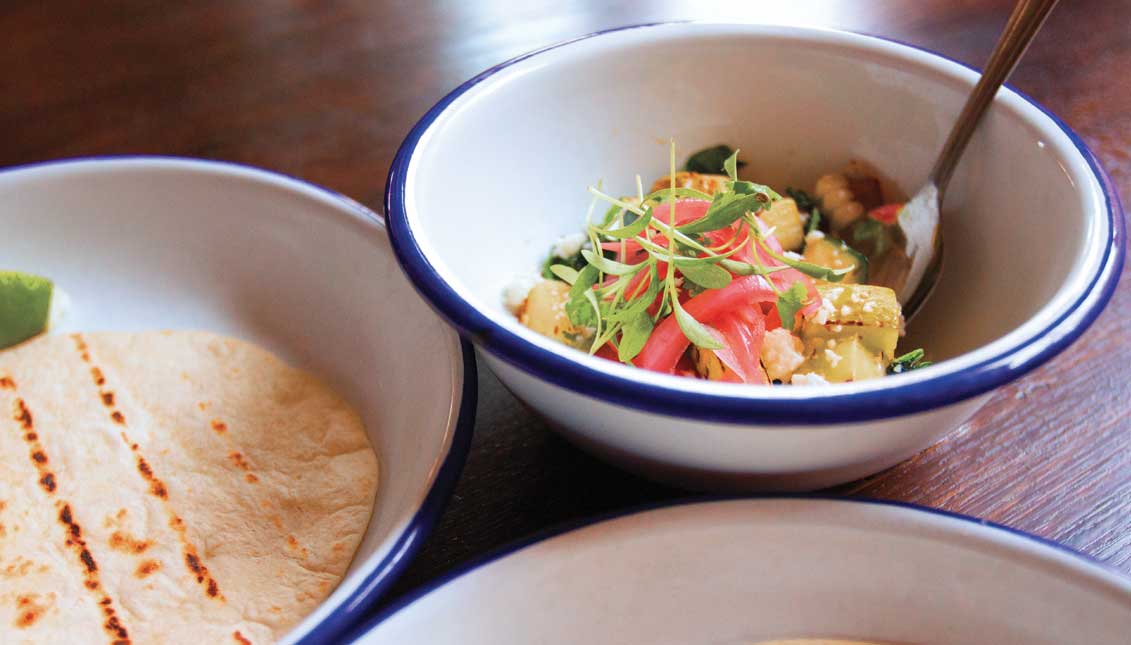 Calabasitas are among the many vegetarian friendly dishes Tio Flores offers.

The executive chef at Tio Flores on South Street puts his own spin on Mexican classics.

“As a kid, I mainly learned how to cook things like beans and rice,” explains Chef Adrian Jeronimo. “When I came to Tio Flores we had meat with meat and more meat. I wanted to serve healthier meals with lots of vegetables.”

Jeronimo has been the executive chef of the Tio Flores restaurant at the intersection of South Street and 16th Street for two years. Since his arrival, he’s entirely revamped the menu serving Mexican classics, such as tacos al pastor and carnitas, as well as new exciting creations, such as tacos with fried avocado or shrimp and bacon.

There’s a special emphasis on serving vegetarian and vegan options. One of Jeronimo’s favorites is the seitan tacos al pastor. He uses the same spices and marination techniques as the original but opts for seitan instead of pork as the protein. Other vegetarian options include fajitas with tofu or seitan and tacos with lentil and cauliflower.

Also available are Americanized tacos. These “gringo” and “gringa” tacos feature either chicken or beef with queso fresco, lime crema, lettuce and salsa roja inside a hard shell.

“We cook what the customers want,” said Jeronimo. “Many customers expect a protein inside a hard shell with cheese, lettuce and sauce. That’s why we have the gringo and gringa tacos.”

His ideas for the dishes come from years of experience working in a multitude of restaurants of diverse cuisines throughout Philadelphia, such as Continental, Gigi Restaurant and Lounge, Bait and Switch and Cantina Los Caballitos.

“I know how to cook Italian, French and other cuisines. I kept switching around because I wanted to learn from all the different chefs. Now my focus is on Latin food,” says Jeronimo.

The chef’s initial foray into cooking came early when he was a teenager, cooking with his mom and grandma.

Jeronimo was born in Puebla, but raised in Mexico City. He worked at a seafood restaurant in the Mexican capital for a few years but eventually decided to move to the United States for more opportunities.

“I am the oldest brother in my family. I had to help my family. I made whatever I could and sent it back to them.”

However, for Jeronimo his work is more than just a way to make a living. It’s his life’s passion.

“I needed to find something to do with my life. I love my job. I love what I do. I’m a hungry man looking for challenges.”

Among Jeronimo’s upcoming ideas for the restaurant is a special celebration in honor of Mexican Independence Day on September 16.  He plans to grill outside and serve tacos, corn on the cob, Mexican hot dogs along with special drinks and beers.

The restaurant also offers a variety of food specials on weekdays. On Mondays, there are $1 tacos. On Tuesdays, you can get a plate of tacos with a six-pack of Tecate for $20. On Wednesdays and Thursdays, they have dollar tacos between 10 p.m. and 12 a.m.

There’s also brunch on the weekends between 11 a.m. and 4 p.m. where you can order dishes like tofu scramble and torrejas, as well as build your own tacos.