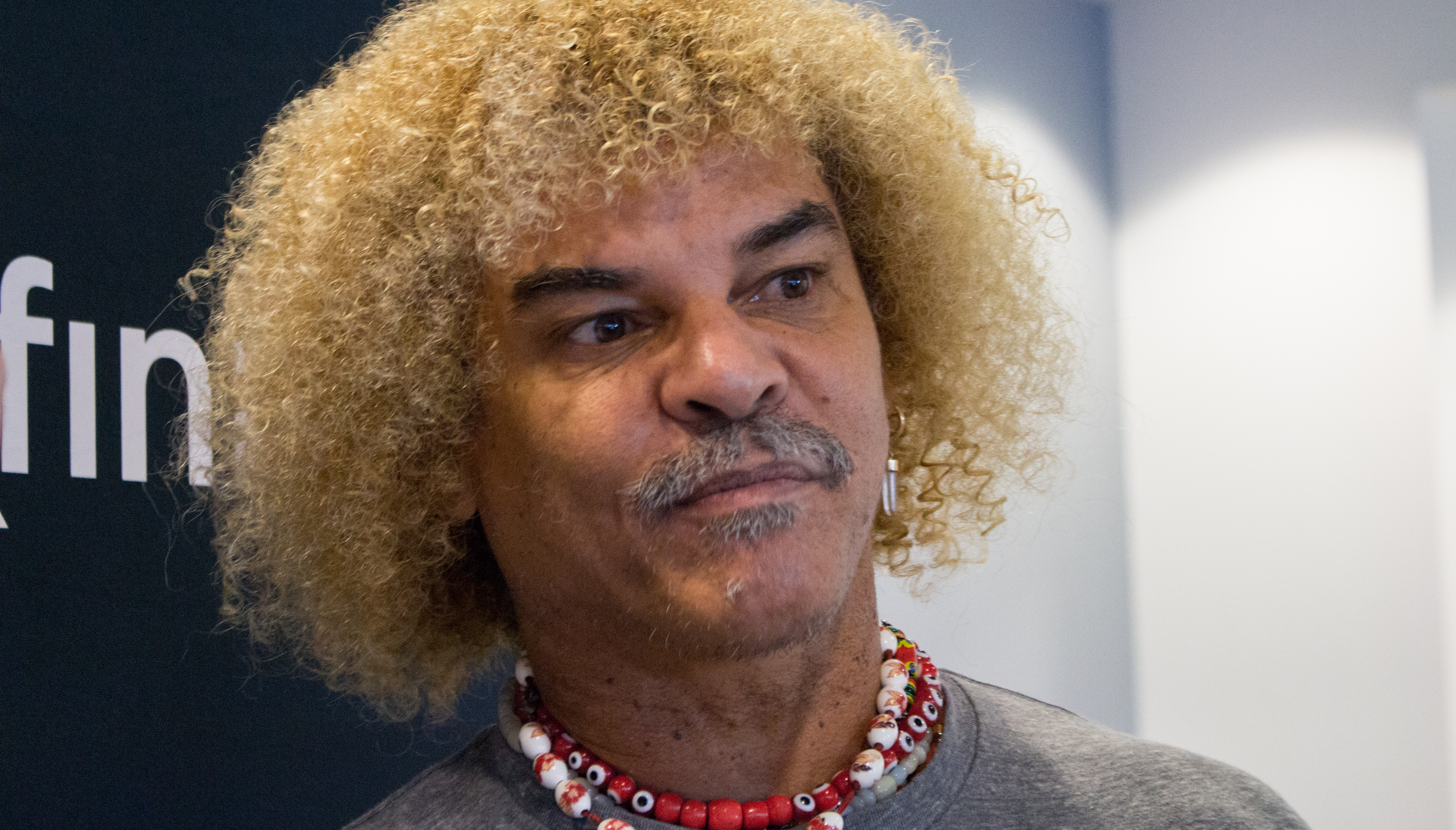 El Pibe came to Philadelphia and tested his fortune-telling skills. See if his clairvoyance matches-up with the adeptness he is famous for in the stadium.

But, for those of you who may have not grown up in a Colombian household where “The Kid” was a staple, I will give you the brief: the former midfielder with a famously luscious head of blonde rotini curls, has amassed an impressive repertoire of international distinctions in the futból world. To name a few: South American Footballer of the Year two years in a row (‘87 and ‘93), MLS All-Time Best XI (2005), and even Pelé himself recognized El Pibe as one of the “greatest living footballers” for the FIFA 100. From the 80s to the early 2000s, El Pibe sported the colors and represented the nations and states of France, Spain, Florida, Colorado, and his homeland (Colombia), where he is so revered that a 22-foot bronze statue of his likeness- hairstyle included -was created and set outside of El Estadio Eduardo Santos in 2006.

Now, almost fourteen years after his retirement, El Pibe faces what most celebrities and athletes grapple with past their “primes”: relevancy.

El Pibe, father and husband, has been staying active on the field (quite literally) by coaching Galactics Clearwater International, an all-ages soccer club in Tampa affiliated with the Florida Suncoast Soccer Association and Liga Mexicana de Clearwater. Nevertheless, off the green, El Pibe resorts to promoting and advertising, the realm where most legends must enter in order to retain their status. As luck would have it, El Pibe was spotted this month at the XFINITY Store by Comcast on 3903 Aramingo Avenue, simultaneously making the dreams of Philaphans come true whilst promoting XFINITY’s latest attempts to tap into the Latino market.

Wearing at least twenty plastic beaded bracelets on each of his wrists like a veteran techno raver, here’s how a brief one-on-one chat with El Pibe went down:

I enjoyed all of them, but I have to say the 1990 FIFA World Cup in Italy, because we classified for the second round of the tournament, which was huge for us. I mean, I guess I could say that maybe the Cups that we had the best results in were my favorite but, no, I think I genuinely enjoyed them all [‘94 in the United States, ‘98 in France].

Since the beginning of your inaugural career with Major League Soccer, how have you seen the MLS evolve and improve? What can you tell me about the future of MLS?

I got to play in the United States for seven or eight years through Major League Soccer, and in my time, there were maybe ten teams-- and that’s being generous. Now, they’re globally recognized! I’m glad that soccer “stuck” in The United States.

Colombian Lucho Diaz nominated for the Ballon d'Or
August 13th, 2022
Playmaker's bet to promote soccer in North America
July 12th, 2022
Philly to host 2026 World Cup match, one of nine U.S. cities
June 16th, 2022
Recently, you were in Mumbai along with other retired players for a press tour about the FIFA U-17 World Cup. What was that like?

It was an absolutely gorgeous experience. I had never had the opportunity to go to India, and I finally had the chance to become acquainted with a pretty country and its people. That’s one of the best things about being an athlete. We are all very enthused about FIFA U-17 this year, and it’s a nice opportunity for them [East Indians] so that people can get to know their country more, and of course for the participating athletes to actually spend time in India. I only have deep gratitude for the overall experience.

Suddenly, my interview was cut short by my extremely over-spirited photographer Yesid (also known as AL DĺA’s Art Director and the man behind the toilsome magic of our weekly print editions), who- as a Colombian and a soccer fan -could not contain himself in the presence of El Pibe. Just like the fifty or so persons who waiting for upwards to an hour in-line to meet the renowned player, Yesid was equally motivated to get a word in with the skilled hero:

Yes, absolutely. Especially as a captain, because we played tremendously well, and we played to the fullest. We put our all in.

Who was the player that challenged you the most in your career?

Simeone [Diego Pablo Simeone, Argentine midfielder also known as “El Cholo]. With Simeone I always had to butt-heads with him, and he was always a challenge, but of course, that was then when I was playing and we had to mark each other and keep each other on guard. After the games- and especially now- we get along well.

What does the Colombian national roster look like now? Do you see us going to the World Cup this year?

The boys currently representing Colombia are doing well. I think if we win the next few games, we’ll have good chances and good results to make it to the Cup. We’re close. I mean, it’s hard to say… But, definitely and uncontestedly, Brazil is going. That’s a no-brainer.

El Pibe’s predictions about the World Cup will have to wait to be tested next summer, when FIFA’s promising players roll into Moscow’s Luzhniki Stadium on June 2018.