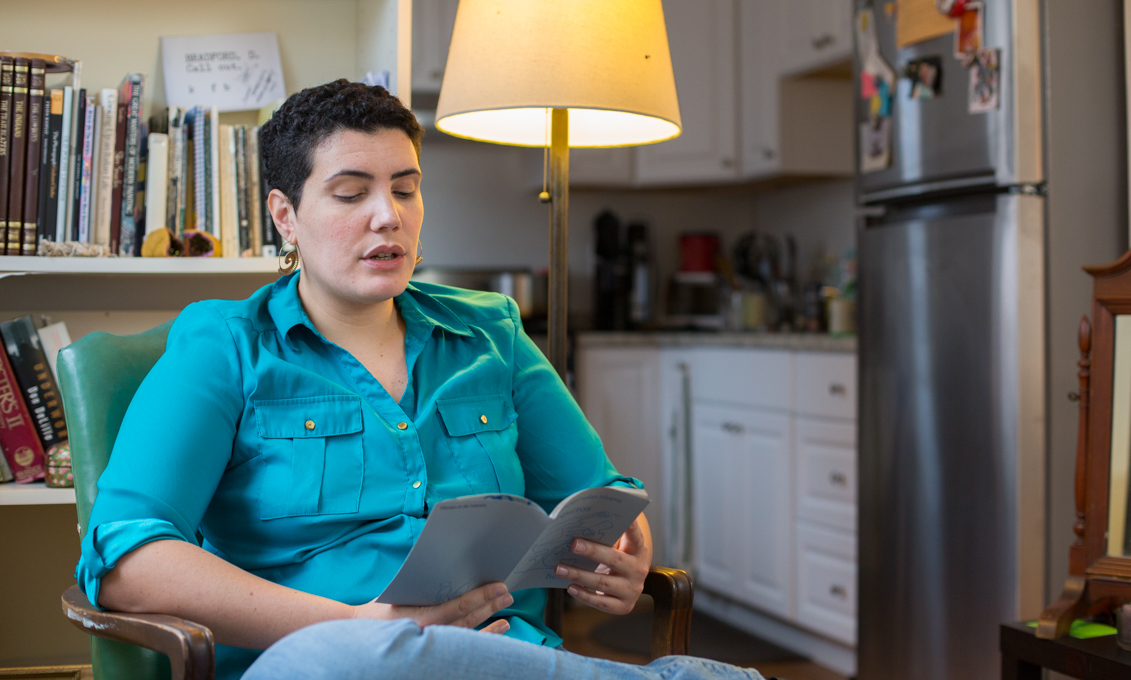 Raquel Salas Rivera, Philadelphia's fourth Poet Laureate, writes bilingual poetry that transcends the conventional, to provide a space for those for whom the…

For some, poetry is meant to carry with its lyric whiffs of Irish glens, scenes from a Victorian marriage, and rhymes that slip from one end of the verse to the next like silk.

This ideal, canonized poetry actively seeks to be pleasant, universally adored, and easily cited. Some of it is worth the hype, some of it (at least in its historical context) was deemed progressive, but most of this classical poetry is a nice-sounding string of clichés written by a revered middle-aged man.

But, for Raquel Salas Rivera, poetry should be a jolting experience, not one that numbs reality, nor one that restrains itself to the societally imposed limits of language and norm.

Rivera is a non-binary, gay, activist hailing from Mayagϋez, based in Philadelphia. As of January 2018, they are the 2018-19 Poet Laureate of the city, the fourth designated thus far by the Free Library of Philadelphia to the two-year civic position.

They have big plans for what they hope to accomplish in their adopted city during their tenure, and it will undoubtedly shake up the status quo.

The label of Poet Laureate may be new for Rivera, but challenging the accepted has always been second nature.

Rivera was born with the desire and capacity to fight for what they perceive to be just. Their parents, the poet and linguist Yolanda Rivera-Castillo and their father, met while discussing Marxist texts and the Puerto Rican Left. Their grandfather and mentor, Sotero Rivera Avilés, was a member of the political poet Grupo Guajana.

"If one day I could write like that [their grandfather], then I did something in this world. I'm more than happy to push forward his work in every context," they revealed.

Rivera soon followed in their parents' footsteps by having a key role in two significant student strikes at The University of Puerto Rico, which they attended before coming to The University of Pennsylvania for graduate school. In 2005, when Rivera was only eighteen, they gave a speech for El CUCA (Comité de Estudiantes contra el Alza). Later, they were one of the principal organizers for student strikes that occurred on the Mayagüez Campus in 2010.

While in Mayagüez during their college and post-undergraduate years, Rivera began to devote themselves to queer performance work whilst studying Comparative Literature. One of the queer events that Rivera is proud to attend still regularly is a conference called "El Coloquio del Otro L'ao."

In Philadelphia, Rivera has continued to do social goods while still maintaining roots to their identity as a trans Boricua. For Rivera, being a migrant still means having to engage with one's community-in-residency and caring about marginalized persons, even if it takes place in a city that they have a "complicated relationship" with.

This internal struggle partly stems from time as a graduate student at The University of Pennsylvania, an institution that not only actively gentrifies West Philadelphia but also houses one of the members of the PROMESA control board that effectively rules over Puerto Rico, David Arthur Skeel.

They are an avid supporter of The New Sanctuary Movement of Philadelphia, Juntos, SANCTUARY Poets, Galaei, and The Mazzoni Center: "I think part of being trans and queer in this world is helping each other out."

Recently, Rivera, along with their partner Allison Harris, brought five queer and trans Boricuas to Philadelphia after the devastating wake left by Hurricane María.

"It's imperative that people have housing, it's imperative that people- especially trans people -have access to hormones. The Hope Clinic in Puerto Rico helped put us into contact with people who wanted to come. We bought them tickets, and we set them up with housing, The Mazzoni Center offered free services. We worked with them, and we went with them to the meetings, we gave them maps to the city, we got them SEPTA cards, we put them into contact with each other, we helped trying to get them employment, and other basic things," they recalled.

When I asked Rivera how they have navigated life through Puerto Rico and living in Philadelphia, and what were their most triumphant moments of political resistance and poetic justice, they laughed profoundly and gave a solid recommendation before getting into an eloquent response:

"Have you seen that movie? It has Janet Jackson and Tupac. It's like, both a terrible and wonderful film, and you should definitely watch it."

As far as navigating life as a Boricua, queer, and non-binary person, Rivera says that it has been less like navigating and more like existing and

managing as best as they can. They don't think it is helpful to talk about being diasporic concerning an experience that can be smoothed over or encased in a uniform generalization.

"For myself, what I've done and what I've tried to do is, I've tried to maintain a strong connection to Puerto Rico, and I've tried to be really present in Philly, as much as I can, to respect and acknowledge where and who I am in this city," they added.

Rivera has a deep, rich laugh that reverberates the room almost as much as their poetry rattles those in it.

We sit there, entranced by them, as they perform one engrossing, avant-garde piece for us from their forthcoming book lo terciario/the tertiary, and then switch into and onto its translation.

It's similar, this second version, and yet, the apparent difference in language and the subtle diversions in structure makes it less like a translation and more like an entirely different poem with an underlying archway, connecting a story, a life lived in two worlds.

The usage of Puerto Rican slang and vernacular (jeva and jevxs seem to make appearances in several of their poems), in both the Spanish and the English poems serve as experiential mirrors and as linguistic boundaries. No translation can capture the essence of a bilingual, non-binary migrant's existence alone, and thus the two versions exist to complement and contrast from the other.

The intimate reading that occurred during AL DÍA's interview, though given to an audience of four people who do not identify as Puerto Rican and/or non-binary,, resonates either way.

In all of us, we find ourselves represented, whether that be through bilingualism, or dual patriotic loyalty, or complicated relationships with sexuality, gender, class, and/or residency.

Beyond the wit, the politics, the nature, and the smart grammatical rearrangements in their poetry, Rivera's poetry taps into a breadth of personalities, backgrounds, and labels. Even if they are written for a specific set of people with a particular set of experiences, most readers can choose to relate to and learn from these poems.

This is why Raquel Salas Rivera being named the fourth Poet Laureate of Philadelphia is such an exciting and salient opportunity.

Rivera's poetry is a bridge that simultaneously builds upon itself and burns up entirely, with language and metaphor that runs in zig-zags between American English and Puerto Rican Spanish, hop-scotches from one culture to the other, and shifts lanes in punctuation and pronouns.

This is a purposeful stylistic and creative choice that they make to provide spaces within their poetry for relatability, especially with their Boricua corilla cuir:

"Poetry is a way for me to have an outside and to have an inside that is mine, to establish ways of talking about things, and for being in our world. I think for most queer and trans folk, we don't see a lot of representations of who we are, anywhere, that isn't written by other queer and trans folk. This is more obvious for Boricuas because we have to deal with double, sometimes triple invisabilizations," they conveyed.

Much like their activism beyond the lines and the pages, the written poetic justice they serve is for bringing the often othered and erased out of the shadows, making their narratives known.

But, their poetry is also deeply personal and for themselves, to work through who they are as a person and where they fit in-between realms, socially constructions, and/or physical places.

Lo terciario/the tertiary, published by Timeless, Infinite Light, queer publishing and performance collective, is Rivera working through colonialism, but also working through and thinking about what Marx meant in their own life, in their political formation as a queer person, and as a non-binary person. They often felt excluded by Leftist-Marxist discourse, even though that same discourse taught them a lot about how to fight back and how to engage with colonialism in Puerto Rico.

“I often felt there wasn’t room for me in that language, for my identity, for my sexuality, for my way of being in the world,” they reflected.

The new, riveting collection is set to be released sometime in 2018.

In early January when the recognition of Philadelphia’s new Poet Laureate was released, The Inquirer called Rivera a “bridge-builder,” but Rivera reminded me of another aspect to that process: sometimes, to build stronger bridges, you must first burn them.

During their two-year public service position, Rivera desires to do much more than merely orchestrating workshops and readings for the sole purpose of enjoying quality poetry. They want to put people that ordinarily wouldn't be in certain spaces in certain spaces. For Rivera, these bridges in Philadelphia between communities of different ethnic backgrounds, races, and immigrant statuses must be fortified and created through dialogue, even if that dialogue is conflictive.

“I think we have to start talking to each other. I want to see different migrant communities talking to each other, and I want to see white Philadelphians stepping up and working to do their part in really thinking about what race has meant in this city, historically. This is a 'white flight' city, this is a city that has often been drained of resources because it is a blacker city. I think Latinx communities have a lot of work to think about in terms of anti-blackness. I think there's a lot of work to be done, and my role more than anything, I hope, will be one in which people can start talking about that pretty openly and directly. This is a position in which I have a lot of vocal power,” they proposed.

We are excited to see where this fierce Boricua will impart profound social change in Philadelphia.

Rivera’s next events will take place in New York City the weekend of March 2nd, 2018. One will be at a Puerto Rico en mi corazón, CantoMundo, and The Poetry Coalition sponsored event at The Caribbean Cultural Center African Diaspora Institute, while the other (More Than A Manifiesto: The Poet’s Essay), will occur at The Lenfest Center for the Arts in Columbia University.