A savvy and successful businessman, Trujillo is a different kind of Latino leader and activist.

How can Latinos save the U.S. economy?

The Latino cohort, as he calls it, is young, entrepreneurial, ambitious, and hard-working.

If the cohort were an independent country, it would have a Gross Domestic Product (GDP) — or economic output — of $2.3 trillion, the eighth-largest in the world and still growing, says Trujillo.

And the buying power of the Latino cohort — composed of consumers, entrepreneurs, and employees — is expected to reach $1.9 trillion by 2022.

A savvy and successful businessman, Trujillo is a different kind of Latino leader and activist. Driven by the data, he is confident that his fellow Latinos will revitalize America’s economy.

U.S. Latinos are an economic powerhouse in the making, Trujillo says.

“Latinos in the U.S. are like the cavalry coming over the hill to support the economy and sustain growth through coming decades,” Trujillo wrote late last year in a Wall Street Journal opinion article.

Part evangelist, Trujillo has been preaching the Latino gospel for nearly a decade. In that same time, the U.S. Latino population has grown to 60.6 million.

However, this year Trujillo’s message that investing in Latinos is investing in America’s future takes on special significance as the country struggles to recover from the coronavirus pandemic.

“The country cannot grow without the Latino cohort,” Trujillo  says,

For his ability to articulate the promise and potential of Latinos, his determination to rely on economic evidence to promote Latinos, and his dedication to helping Latinos succeed as he has, Trujillo is ‘Person of the Year’ for AL DIA News.

Sitting in his home office in California, a New York Yankees cap on his desk, Trujillo talks over Zoom with Hernán Guaracao, founder and CEO of AL DIA News.

Like many US-born Latinos, Trujillo easily switches between English and Spanish, talking about the GDP one minute and frijoles and family the next.

Trujillo notes that two-thirds of Latinos are US-born with an average age of 19 and will replace retiring baby boomers in the workforce. Latinos have created 80% of all net new US companies in the last decade, he says.

Latinos own more than 4 million businesses in the United States. Nationwide, companies with majority Hispanic ownership provide almost 2.7 million jobs to workers in the U.S.

“It’s a story that I felt I needed to tell because I am a business person, not because my name is Trujillo but because I have pride in my country,” Trujillo says.

But it was watching how his parents patiently corrected people who mispronounced the family’s last name that inspired Trujillo’s Latino pride.

“I made sure people pronounced it right every time,” said Trujillo, who grew up in Cheyenne, Wyoming, a town with few Hispanics then.

Trujillo graduated from the University of Wyoming with a bachelor’s of science in Business and an MBA in finance. After college, he went to work for AT&T, and at the age of 32, became the youngest chief executive officer in the history of the company.

His career has spanned the globe running billion-dollar companies, accepting appointments to national and international corporate boards, and serving as a trade policy advisor to presidents.

He has faced controversies, overcome racism, and promoted diversity as making good business sense. But Trujillo’s most ambitious legacy may very well be ensuring that U.S. Latinos are at the front of the pack as the world economies struggle to come back from the pandemic.

The Real Power Behind The Latino Spirit

Latinos, Trujillo says, are a distinct advantage in the global economy. He predicts the Latino cohort will likely pass the GDPs of France, the UK, and maybe India within the next five years and become “the sixth or fifth-largest economy in the world.”

To develop the research and data at the core of his message, Trujillo co-founded the nonprofit Latino Donor Collaborative (LDC) in 2010. LDC produces and releases the annual GDP report on the Latino cohort.

Trujillo also co-founded L’Attitude in 2018, a platform to sell his message. The annual national business conference helps “enlightened executives understand The New Mainstream Economy and the U.S. Latino cohort that is driving it.”

Held virtually this year, L’Attitude featured the heads of BlackRock, the largest investment firm in the world, Nike, and The Wall Street Journal, among others.

This year, L’Attitude also welcomed producer and entrepreneur Emilio Estefan as a partner to help expand the national business initiative and event.

“We want to expose the worlds of business, politics, finance, and entertainment to the talent and criticality of the U.S. Latino cohort, and he has demonstrated leadership in all those areas,” Trujillo said during an announcement in February.

In addition to L’Attitude, Trujillo has written articles in the Wall Street Journal and other mainstream business media extolling the uniqueness of the Latino cohort and its GDP.

The headline on a September 2020 Forbes.com article describes Trujillo’s impact: “How Sol Trujillo is changing the landscape of corporate America.”

In the article, Trujillo acknowledges that “I’ve certainly faced my share of obstacles and criticism, but every challenge brings opportunity.” 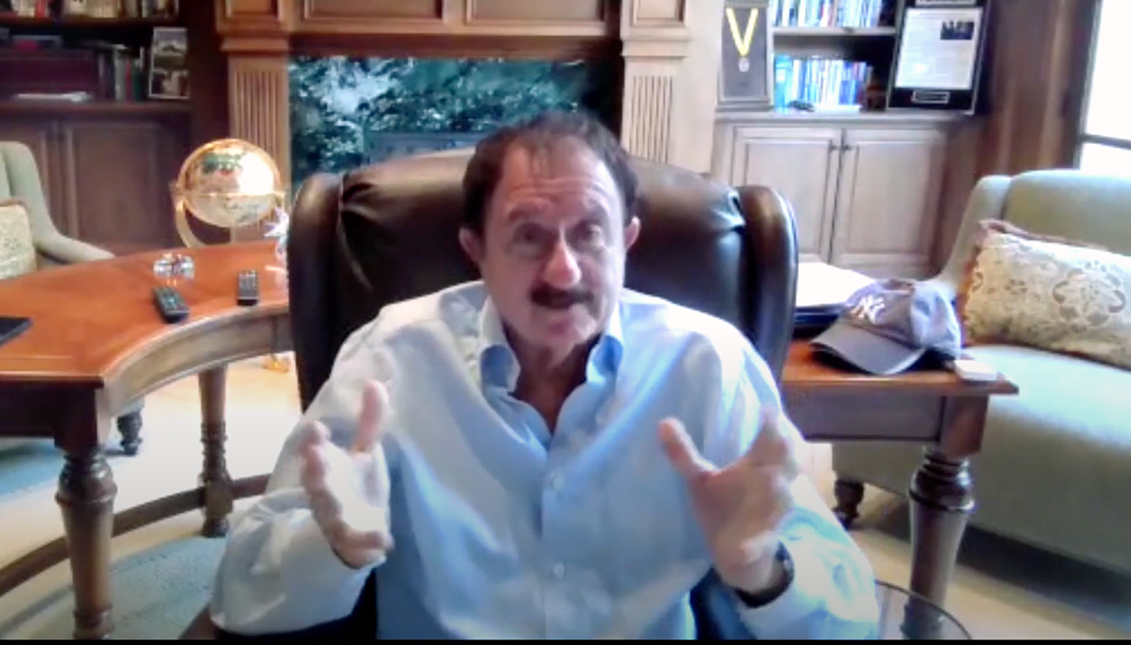 For his ability to articulate the promise and potential of Latinos, his determination to rely on economic evidence to promote Latinos, and his dedication to helping Latinos succeed as he has, Trujillo is ‘Person of the Year’ for AL DIA News.  AL DIA NEWS
A New Obstacle

The pandemic, Trujillo says, is such a challenge.

Eight in 10 registered voters told Pew Center researchers that the economy was their top issue during the presidential election. Trujillo’s answer: political power is rooted in economic power, and Latinos are on the verge of securing it.

For example, some Latino companies simply need a chance — and investment capital — to demonstrate their value. Some young Latinos need a boost in skills. Those that are undocumented need a path to citizenship. More Hispanics are needed at the top, in boardrooms making key decisions, he said.

For Trujillo, who could be enjoying retirement, working with up-and-coming Latino companies is more engaging. He was recently appointed non-executive chairman of Encantos, an ed-tech company founded by four Latino friends. Trujillo will invest in the company as it prepares for its next phase of growth.

“Sol is a business legend, one of the most accomplished and respected global executives in the world,” said Steven Wolfe Pereira, CEO of Encantos. The company’s brands include Canticos, Issa’s Edible Adventures, and Tiny Travelers.

Having spent much of his career as the only Hispanic in the boardroom, today Trujillo is focused on making a business case for the Latino companies and the Latino cohort.

Earlier this month, he appeared on CNBC on a story about Latinos and the economic opportunities available to them.

Trujillo was asked, “how much bandwidth is there for corporate America to address the Latino question” if they also have to deal with other constituencies?

His simple answer: “I think there is plenty — if they like to make money.”

Who is Sol Trujillo?

EDUCATION: Graduated from East High School in Cheyenne; bachelor’s of science (1973) & MBA in Finance (1974), both from the University of Wyoming.

1974-1992: Began his business career as an economic forecaster in the Mountain Bell division of AT&T.  At 32, selected to serve as CEO of Mountain Bell’s operations in New Mexico, the youngest officer in At&T’s history.

2010: Co-founded the Latino Donor Collaborative, a nonprofit “dedicated to reshaping the perception of Latinos as part of the American social mainstream.” It produces the annual U.S. Latino GDP report.

2018: Co-founded L’Attitude, “a business based national initiative focused on helping enlightened executives understand The New Mainstream Economy and the U.S. Latino cohort that is driving it.”

Awards: Honorary doctorates from Whittier College in California, the University of Colorado and the University of Wyoming; "Ronald H. Brown Corporate Bridge Builder Award" from President Clinton for creating opportunities for women and minorities.

Personal: Married to wife, Corinne. They have three daughters. The family lives in California.

The national platform showcases the contributions of U.S. Latinos in business, media, politics, science, and technology.

This year, L’ATTITUDE played a critical role in calling attention to the many ways our country is depending on the U.S. Latino cohort to help catalyze the restart and rebound of what Trujillo calls the “New Mainstream Economy.”

The event looks to engage participants to enable faster, more profitable growth while understanding the significant value of investing in this new mainstream cohort of U.S. Latinos.

Trujillo co-founded L’Attitude with Gary Acosta, co-founder, and CEO of the National Association of Hispanics Real Estate Professionals. In 2020, producer and entrepreneur Emilio Estefan was also made a partner in the national business event.

To get AL DÍA Print Edition at the comfort of your home, please click here
TAGS
L’Attitude
sol trujillo
Person of the Year

Sol Trujillo says Latinos are the reason there is hope in the U.S.’s economic future