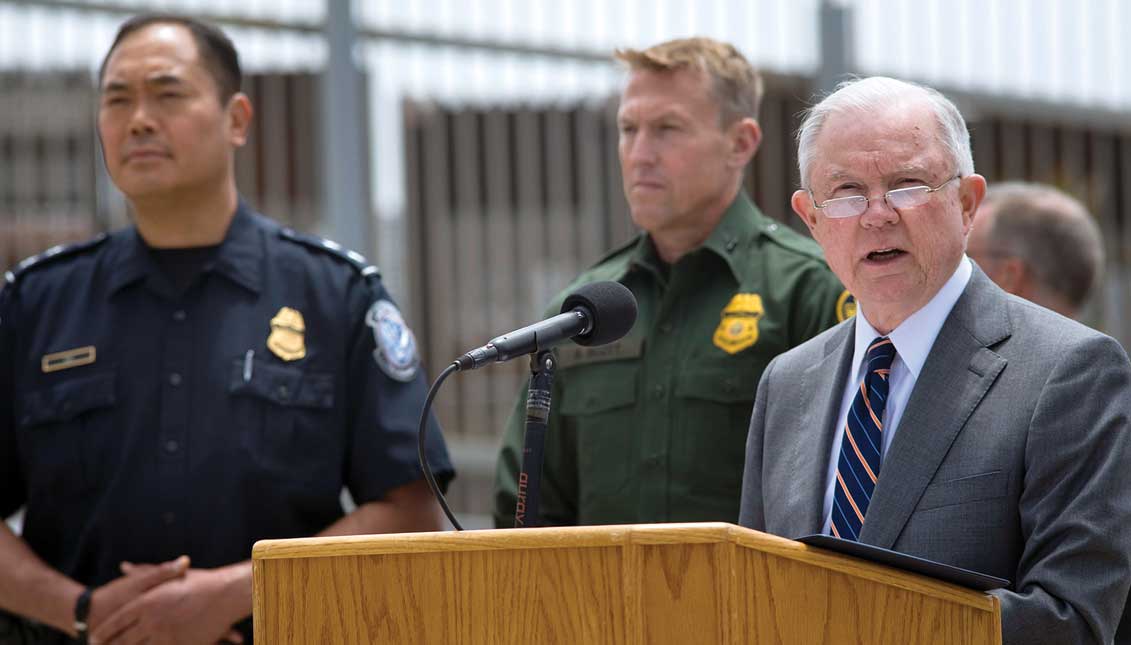 U.S. Attorney General Jef Sessions announcing that the Justice Department will begin prosecuting every person who illegally crosses into the United States along the Southwest border. EFE

Racism by any other name is still racism. And it is still despicable and inexcusable, even when hidden behind a faux façade of “patriotism,” “respect for the…

Racism, of course, is not only black and white, although the recent deluge of reports about sick, blatant incidents of abuse against black people makes it seem that way. It’s not only the repeated instances of savage police brutality, but it is also the multiple cases of white people so ignorant and devoid of humanity that – to give only a couple of examples –they called the police on a black student at Yale that fell asleep in a university public area and did the same on some Airbnb black guests who had the audacity of not waving back at a white woman.

Post-racial society? Don’t make me laugh. Trump has created a fertile breeding ground where racism -- and millions of racists -- are flowering as few times before. As far as I am concerned they can all go to hell.

Despite the hypocritical “holier-than-thou” attitudes assumed by Washington when dealing with other countries’ human rights situation, the existence of an official policy of persecution of immigrants and asylum seekers so brutal that it includes taking children from their parents makes a bad joke of any U.S. claim to moral superiority.

The Trump administration couldn’t care less that most of the people that turn themselves in at border immigration stations with their children are Central Americans who are running for their lives.

Sessions, a small man but a big immigrant hater, was making official a new “zero tolerance” repressive policy. Now the Justice Department will prosecute every person who crosses the border with Mexico. Despicably enough, this policy makes special emphasis on cruelly punishing families with children.

Not surprisingly, the Trump administration couldn’t care less that most of the people that turn themselves in at border immigration stations with their children are Central Americans who are running for their lives. They are not “illegal immigrants” but legal asylum seekers, although that doesn’t make any difference for the immigrant-hating Trump administration.

“If you don’t want your child separated, then don’t bring them across the border illegally. It’s not our fault that somebody does that,” Sessions said with the cynicism that characterizes Trump and his gang of greedy millionaires, double-dealing lawyers, Putin-loving crooks and crusty old generals.

One of those generals is the White House chief of staff, John Kelly, who recently stated that separating children from their parents is not cruel, adding one more page to the already lengthy book of racist and heartless remarks uttered by White House staff.

“The children will be taken care of — put into foster care or whatever,” Kelly told NPR when asked if it is “cruel and heartless to take a mother away from her children.”

As New York Times former columnist Clyde Haberman (@ClydeHaberman) tweeted in response: “Like many others, I can't shake off John Kelly's soulless comment justifying breaking up families at the border: ‘The children will be taken care of -- put into foster care or whatever.’ That ‘whatever’ betrays such a callous spirit.”

It betrays also the racism and indifference to suffering that fuels Trump’s war on immigrants.

For him, when it comes to immigration, cruelty is the best policy.