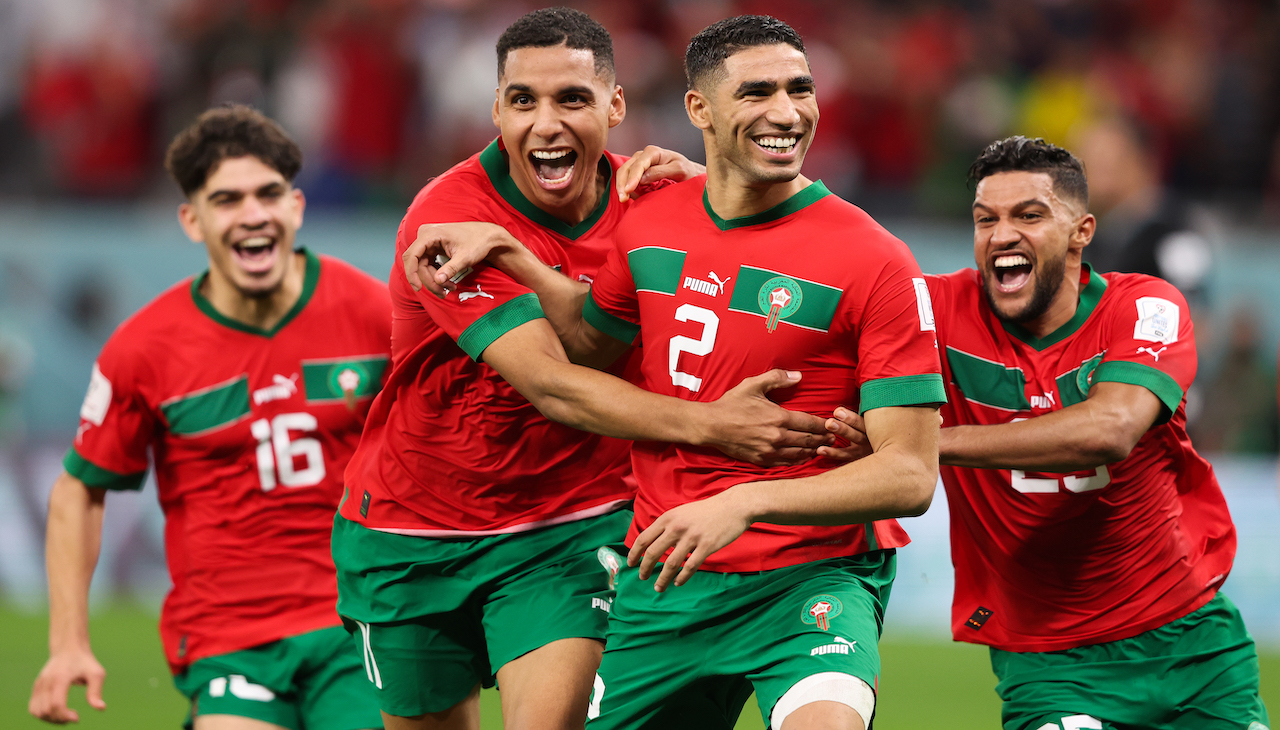 Achraf Hakimi and some of his Morocco teammates celebrate after he scored the winning penalty against Spain. Photo: Alex Livesey - Danehouse/Getty Images

Morocco goes for Al-Andalus on Saturday

On Dec. 6, Morocco came out victorious after having executed their game plan flawlessly against Spain: Let Spain keep possession, and attack them through counters. Once it got later in the game and closer to extra time, play for penalties, their best chance to beat a stronger opponent.

Despite Spain completing nearly 1,000 passes, they didn’t amount to much, with neither side having any real chances throughout 120 minutes of play. Kudos to Morocco, who let Spain play themselves into a penalty shootout, where they have been recently abysmal — losing to Italy in the 2020 Euro Cup semi-finals and Russia in the 2018 World Cup round of 16.

Morocco is also the only Arab country to make it this far in the tournament — so no pressure, only all of Africa and the Middle East’s weight is on this scrappy team’s shoulders moving forward. Given that the World Cup is being hosted in Qatar, the first-time that an Arab nation hosts the tournament, the spotlight is now as bright as can be on this team.

In this spotlight, several Moroccan players were also seen waving a Palestinian flag as the team celebrated their momentous victory, despite FIFA having banned the use of “banners, flags and fliers that are deemed to be political, offensive and/or discriminatory in nature.” Among the Moroccan crowd that was larger and louder than the Spanish fans, was a banner that said “Free Palestine,” a movement that has captivated the attention and support from the entire Arab world.

There’s also some irony to Morocco having beaten Spain and having a chance to advance to the semi-finals with a victory over their Iberian neighbor Portugal. Al-Andalus was once the name of the Muslim-ruled area of the Iberian Peninsula, referring to the formerly Islamic states of Spain and Portugal from 711 to 1492. Despite the Muslim occupation occurring long ago, there were countless cultural exchanges, advancements that remain engrained in both Spainish and Portuguese societies to this day. The modern day form of the reconquista could take place if Morocco defeats the second of the Iberian football giants in Portugal.

Perhaps the best story from Morocco’s 3-0 penalty shootout win over Spain was the fact that The Atlas Lions’ Achraf Hakimi was the one who sent his country to the next round through a cheeky Panenka penalty.

There are many layers to this story, starting with the fact that Hakimi was born in Madrid and previously played for Real Madrid, but turned down the opportunity to play for La Roja in favor of playing for his home country.

“My mother cleaned the houses and my father was a street vendor. I fight every day for them. They sacrificed themselves for me. They deprived my brothers of many things for me to succeed” said Hakimi, who followed up his winning penalty kick by running to the stands to hug and kiss his mother.

Now onto the Panenka — for those not familiar with a this particular style of penalty, it is a light touch shot (a chip of sorts, if you will) meant to fall softly into the middle of the goal, named after the Czech player Antonín Panenka that made it famous during the 1976 Euro final.

Sounds easy, right? Wrong. This ballsy shot is intended to be the ultimate deception — the penalty taker has to assume that the goal keeper will dive away from the center of the goal for this to work. If it doesn’t work, the taker looks like a fool, the basketball equivalent of air-balling two free throws in a row with the game on the line.

Luckily for Hakimi, he came out on the other side as a hero — for him to finish off a stronger squad with such a brazen shot shows that he is as fearless as they come.

The last layer was his celebration, and it showed subtle humor and a jab at his Spanish opponents. It’s also something that only true football fans would be able to put together. Here’s the context:

Luis Enrique, Spain’s manager, has been a polarizing figure not just for being an eccentric, Twitch-streaming personality, but also for his questionable roster decisions such as not calling up veteran stars the likes of Sergio Ramos, Thiago and David DeGea to the national team.

At a club level, Hakimi currently plays for Paris Saint-Germain, alongside the aforementioned Spanish right back Ramos — the two of them have grown to be friends and known for their joint Penguin “waddle” celebrations after goals.

The first thing Hakimi did after scoring a Panenka penalty? A waddle celebration in the middle of the pitch, smiling eye to eye. If missing all three penalties wasn’t enough insult to Spain, Hakimi made sure to have the last laugh and took a shot at Luis Enrique, paying tribute to his friend and Spanish legend Ramos that was wrongly left out of La Roja.

On Dec. 8, Luis Enrique officially stepped down as Spanish Manager — and it’s safe to assume Ramos is somewhere smiling too despite his country getting sent home in the round of 16 for the second time in a row.

For Morocco and for the rest of the world outside of Europe and South America, the win signifies the growth of the beautiful game and provides hope to smaller, yet undyingly passionate football nations that compete for this world glory.