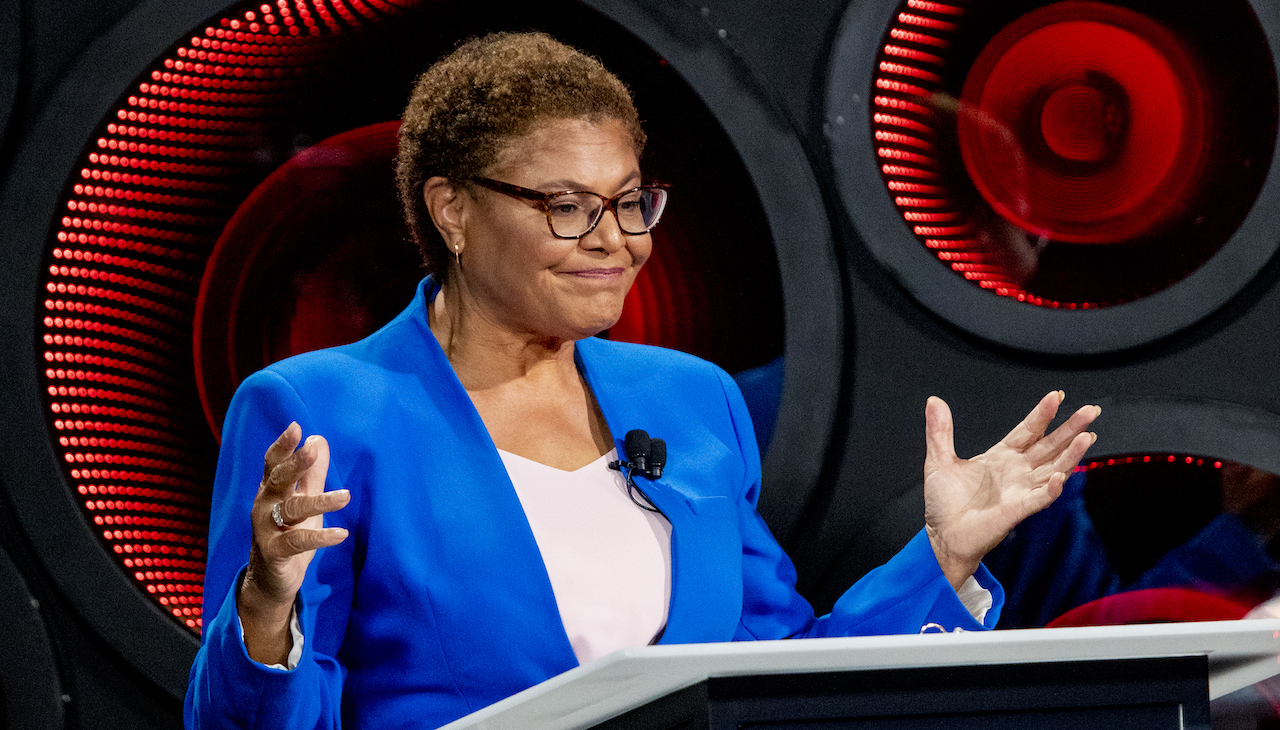 In race for L.A. Mayor, Karen Bass catches the wrath of a local Latino group and apologizes

During a radio debate with Rick Caruso, the U.S. Rep. running for mayor asked a question suggesting Caruso paid for the endorsement of Avance Democratic Club.

On Friday, Oct. 7, U.S. Rep. Karen Bass issued an apology to the Avance Democratic Club after she suggested the group was paid by her opponent in the Los Angeles Mayor’s race for its endorsement.

“Accountability and transparency starts with me, and when I make a mistake, I own it,” Bass said in a statement to The Los Angeles Times. “I shouldn’t have said what I said. I sincerely apologize to Avance and its membership.”

Rick Caruso and Bass faced off in a radio debate on Thursday, Oct. 6, where Caruso touted his recent endorsement from the Los Angeles County Latino political organization.

“How much did you pay for it?” was Bass’ response in the moment.

Caruso responded that she had insulted the club.

The Avance Democratic Club, founded in 2015, touts itself as the “largest Latino club in L.A. County,” and is focused on building Latino political in and around Los Angeles. It is the brainchild of several former aides of current Los Angeles Mayor Eric Garcetti, including his one-time chief of staff Ana Guerrero.

“She insinuated that our club was for sale, and somehow our endorsement illegitimate,” Nilza Serrano, the president of Avance, told the Los Angeles Times before defending the organization’s process of endorsing a candidate for mayor.

In a Sept. 29 meeting, both Caruso and Bass introduced themselves to Avance and its members, getting three minutes each to make their pitches. At the end of the meeting, votes went 85% in favor of Caruso, according to Serrano.

When addressing if there actually was an exchange of money between either of the candidates and Avance, an event held by the organization on Sept. 22 came into focus.

The event was a celebration to honor both Los Angeles County Democratic Party Chair Mark Gonzalez and Lorena Gonzalez, a former state representative and the executive secretary-treasurer of the California Labor Federation. Bass and Caruso were among a number of individuals asked to donate money to support the event. Caruso gave $5,000 and Bass gave nothing.

Caruso’s donation was also the focus of a recent op-ed from longtime columnist Sal Rodriguez for the Los Angeles Daily News. While not offering any novel details on the situation, Rodriguez said Bass “should’ve had the $5,000 figure handy if she was going to make that line of attack.” He also called Caruso’s $5,000 donation a week before the endorsement announcement “gross.”

In terms of actual impact on the ballot, Nov. 8 will have the answers. Bass was the winner by seven points in the primary, but Caruso won more support in Latino-majority precincts.

TAGS
garagehero1
Bass must be either dumber than a box of rocks or a racist and we dont need either as mayor. She should drop out of the mayoral race.
Log in | Register
00:00 / 00:00
Ads destiny link