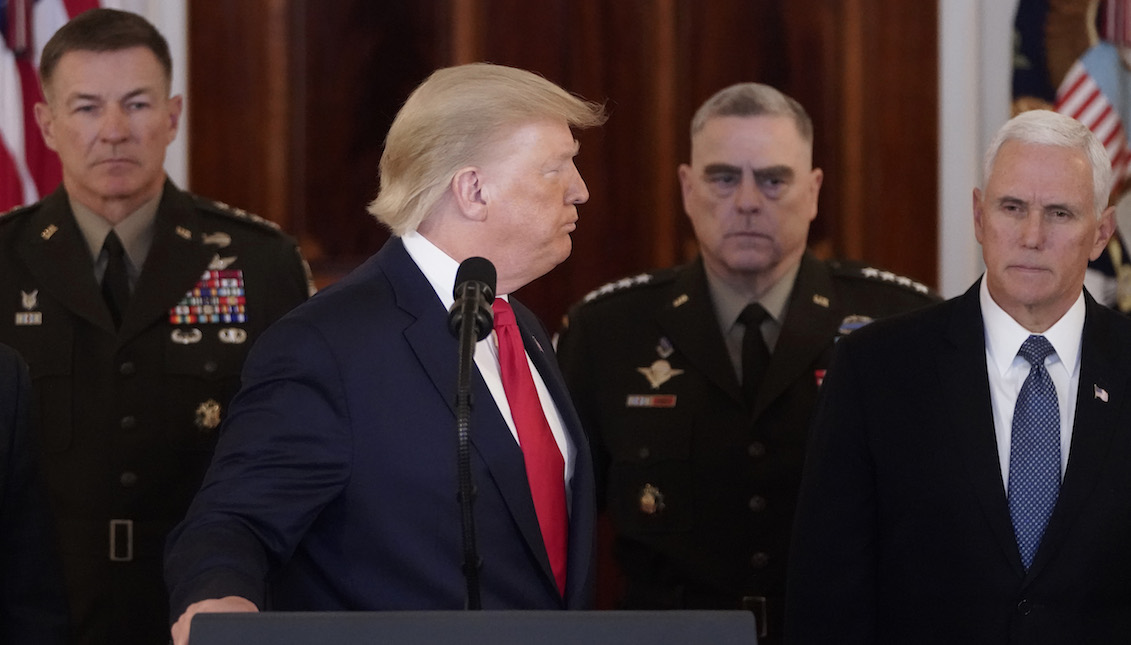 Crisis with Iran: The game of incongruous retaliation

Amidst contradictions and hollow statements, Trump lowers the tone against Iran.

The scene after the assassination of General Qassem Suleimani by an American drone was one of the most dangerous in recent years.

Military and intelligence officials had determined Suleimani's location and, after warning of a possible attack by Iran, offered a series of options to President Trump, who chose the most dangerous of all: to eliminate the general.

However, the details of the operation remain incomplete for public knowledge.

While tracking Suleimani had long been a priority for both U.S. and Israeli military agencies, the possibility of assassinating one of the most powerful men in the Middle East was an option that everyone had usually taken off the board, precisely for fear of retaliation from the Tehran government and the militias trained and deployed in various territories under the command of the general.

Only days after his death, a dozen Iranian missiles fell on U.S. bases in Iraq, forcing the international community to ask the Trump administration what the strategy was.

Apparently, there is none.

From the beginning of his administration, Trump promised to bring back the troops deployed in the Middle East, but the situation with Iran has meant that more troops must be sent to the region.

While the State Department was predicting a "de-escalation" of the situation, the U.S. president was increasing his Twitter threats against Iran, even raising the possibility of destroying cultural sites in the country, which would be a war crime.

The attack on Suleimani, in itself, did not seem to have a sustainable argument behind it, for while administration officials claimed that eliminating him was a way to "prevent an imminent attack that would put thousands of American lives at risk," no one could make sense of an action that would fuel precisely those possibilities.

"The messaging has just been horrible," former Department of Homeland Security spokesman David Lapan told the New York Times. “It’s just been all over the map. At a time when you have something so serious, you need clear communication and instead what we got was contradictory, confusing communication from an administration that already has a trust deficit.”

In an attempt to shed some light on the situation, the U.S. president held a press conference on Wednesday that, to the surprise of a few, was marred by inaccuracies.

After assuring that no Americans had been injured in the Iranian counterattack, Trump said: “Iran appears to be standing down, which is a good thing for all parties concerned and a very good thing for the world.”

But what Iran really did was to react by sticking to international law, trying to turn the tables on Trump.

‘He is showing the international community that he has no respect for international law.’ — Foreign Minister Javad Zarif says Iran will respond to Trump’s strike and threatened war crimes ‘proportionately’ pic.twitter.com/Vlob25Z8dZ

Zarif denounced that the United States had "violated the sovereignty of Iraq," "the emotions of the people," and that, with the murder of Suleimani, it had fallen into "state terrorism.”

We can now say that one of Donald Trump's greatest achievements is to make a regime like Iran's sound diplomatically consistent by comparison.

Despite Secretary of State Mike Pompeo's efforts to defend the attack to the media –efforts that, for some, have made him "the most powerful Secretary of State in decades"– understanding how assassinating one of the most dangerous and influential men in the Islamic extremist wing of the Middle East can indeed be a good thing.

Time will tell if the cure will indeed be better than the disease.