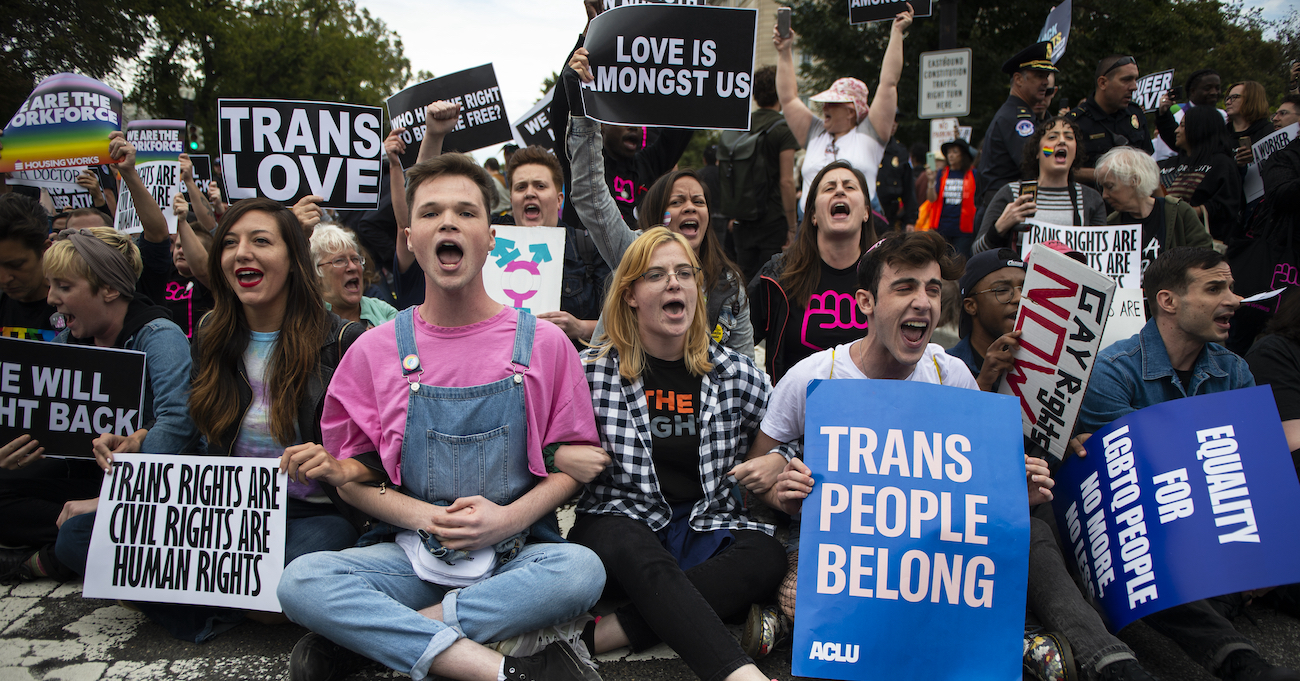 It’s a rare victory for LGBTQ+ rights organizations amid a wave of restrictive bills in states across the country.

On Wednesday, July 21, federal courts in Arkansas and in West Virginia took a stand against anti-trans bills.

In Arkansas, federal judges placed a temporary block on a law banning gender confirming medical treatments for transgender youth, and in West Virgina, a bill banning trans women and girls from participating in sports teams matching their gender identity.

The Arkansas ruling prevents the state from enforcing the law that made it the first state to prohibit doctors from offering hormone treatment, puberty blockers, or gender affirmation surgery to minors.

The law, which was set to take effect on July 28, also banned doctors from referring the patients to other providers.

The American Civil Liberties Union (ACLU) filed a lawsuit in May requesting that U.S. District Judge Jay Moody strike down the law.

The ACLU filed the suit on behalf of four transgender children and their families, along with two doctors that provide these types of treatments. The suit argues that this ban would severely harm trans youth in Arkansas and violate their constitutional rights.

Moody agreed with this statement and put a block on the law, marking a major victory for the entire LGBTQ community.

After 7 months of relentlessly fighting anti-trans bills in state legislatures, today we are in federal court in Little Rock to try to stop Arkansas’s health ban from going into effect next week. We will never stop fighting for our trans loved ones. #ProtectTransKids

Waves of similar anti-trans legislation have been sweeping the nation in 2021. As of June 6, state legislatures across the country have introduced more than 100 bills restricting trans rights.

"To pull this care midstream from these patients, or minors, would cause irreparable harm," Moody said.

Arkansas Gov. Asa Hutchinson had vetoed Arkansas’ own sports ban following pushback from social workers, parents of trans children and pediatricians, who claimed that it would harm a community already at great risk for depression and suicide.

After the ruling, Hutchinson stated that the law will be struck down for the same reason he vetoed it.

"The act was too extreme and did not provide any relief for those young people currently undergoing hormone treatment with the consent of their parents and under the care of a physician," Hutchinson said in a statement.

“To pull this care midstream from these patients, or minors, would cause irreparable harm,” .S. District Judge Jay Moody ruled on Wednesday. https://t.co/KuM0yexgXe

Moody issued the ruling shortly after hearing arguments from the state and the law’s opponents for over an hour.

He raised skepticism on the state’s argument that the law was only targeting the procedures themselves and not directly attacking transgender people.

He questioned why a minor born as a male should be allowed to receive testosterone, but not one who was born female.

"How do you justify giving that to one sex, but not the other and not call that sex discrimination?" Moody asked.

Holly Dickson, the executive director of the ACLU in Arkansas said in a statement that the ruling sends an important message that these types of treatments are life-saving, and that their team plans to follow through on this fight to strike down the law for good.

“We won’t let politicians in Arkansas, or anywhere else, take it away,” Dickson said.

However, the decision isn’t viewed as a victory for all, and it is already being challenged. Arkansas Attorney General Leslie Rutledge said on Wednesday that she plans to appeal the decision.

Unfortunately, instead of cutting their losses when the outcome seems so clear, the office of Attorney General Leslie Rutledge is prepping to double down. Rutledge is an underdog candidate in the race for AR governor. Continuing with this legal defense is a waste of taxpayer $$.

In a statement, Rutledge vowed to “aggressively defend” the law, adding that the ACLU is “using our children as pawns for their own social agenda.”

Villano Antillano shows us we can have our cake and eat it too. In her case, make-out with it
August 30th, 2022
Arkansas state law targeting Spanish speakers overturned
August 23rd, 2022
What would a Transgender Bill of Rights do?
July 18th, 2022

While Rutledge is strongly in favor of the law, she did state that the law was problematic for those young people already undergoing treatment.

This is one area where Rutledge and the ACLU are in agreement.

In the lawsuit, the organization stated that under the law, trans youth in the state that are already receiving care will be forced to have their care abruptly halted, which “could have serious and potentially life-threatening consequences.”

According to the CDC, trans youth already face a higher risk for attempting suicide, and LGBTQ and medical advocates argued that the law could worsen the issue.

Pepper-Jackson comes from a family of runners and simply wants to continue competing with her classmates by trying out for the girls’ cross-country team.

Becky Pepper-Jackson said she comes from a family of runners and simply wants to compete with her classmates.

In another small win, U.S District Judge Joseph Goodwin ruled in favor of Pepper-Jackson and her family, stating in his order that it was in the public interest to uphold the constitutional rights of this child.

So, all this happened yesterday:

If you attack trans people, we will fight back.

“Any harm to (her) personal rights is a harm to the share of American rights that we all hold collectively,” Goodwin said.

Pepper-Jackson said in a Lambda Legal statement that she is thrilled now that she has the opportunity to follow in her family’s footsteps and try out for the team, but she was hurt that her own state tried to block her from pursuing her dreams.