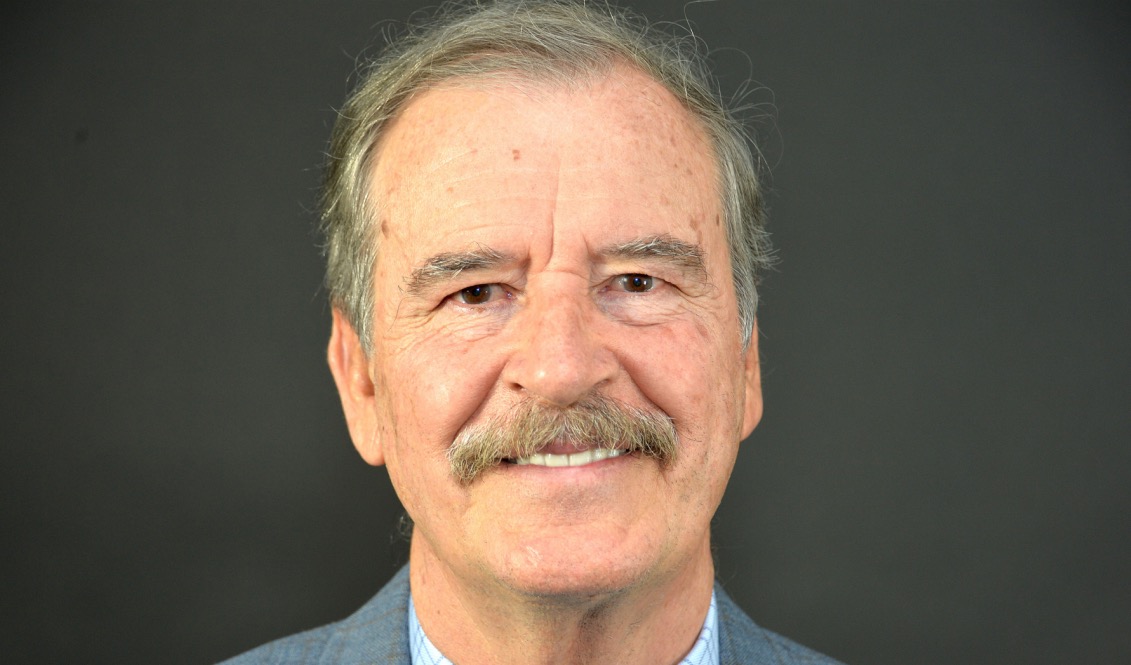 Vicente Fox without the "F" word

The former president of Mexico came to Philadelphia to talk about the wall, this time in a very different way.

The result of Vicente Fox's visit to Philadelphia on April 4th and 5th was surprising; unlike his controversial appearances in the mass media -  this time the Mexican president left behind the effectiveness of not-too-presidential language in order to develop more complex ideas.

On this occasion there were no mean words for President Trump or the use of the "f" word to refer to the wall, that made him the favorite showman of the media, very much at the expense of the statesman he in reality is.

"What the hell is going on?" Was perhaps the only license he allowed himself before explaining why, in his opinion, it is foolish to insist on isolationist policies and slogans like the "Make America great again" in an increasingly globalized world, where migrations are a natural and inevitable phenomenon.

The Fox who came to Philadelphia acted more like a historian rather than a "hombre malo," who, in order to establish the urgency of the matter, pointed out two big failures in history: The Great Wall of China and the Berlin Wall.

His paused tone, however, did not hide the firmness of his words. Vicente Fox made it clear that he does not oppose the right of the United States to have safe and orderly borders, including "deporting those who are irregularly in their territory, but -he emphasizes- that should always be done while respecting the dignity of the people and their human rights."

So why interfere in other issues like the US elections? For the former head of state, Trump's words against his countrymen were the trigger of his discomfort. "This man went crazy when he said the Mexicans were going to pay for the wall. What arrogance! No Mexican would accept such a thing,” he said angrily.

Trump's offenses against the Mexicans were not the only reason to seek a fight against the new White House tenant. For Fox, everything that smells like a dictator can be questioned, more so when the international community has been so soft when it comes to remind him "what they decide here affects the rest of the world."

And he doesn’t exaggerate: history is full of facts that prove the United States has played a more than leading role in the future of many nations. From Central America, through the Middle East, Asia and the Southern Cone, they are well aware that – paraphrasing a recent article from AL DÍA News - when Washington sneezes, the rest of the world gets a cold. Unilateral decisions such as the exit of the TPP, the cancellation of the environmental commitments and the recent bombardment to Syria could end up proving the Mexican ex- president right.

The fact that Vicente Fox is the Mexican president who has promoted the most an immigration agreement with the United States is no coincidence. Each time he talks about the subject, the former man does so with a mixture of compassion and indignation.

And the stories of immigrants in the United States affect him almost personally, perhaps because that seemingly distant diaspora is part of his DNA. Many in Philadelphia did not know that American blood runs through Fox’s veins.

Just over a century ago, Joseph Louis Fuchs, a gringo born in Cincinnati, Ohio, migrated to Mexico in search of a better future. "He took the horse, rode on a train, crossed the mountains, deserts and rivers until he reached Irapuato, (Guanajuato, Mexico) where he settled perhaps because he found a pair of beautiful black eyes,” said his grandson, the former president.

The history of his family goes back 400 years back in Ireland, when the first Fuchs left their lands harassed by the hunger and the plague. "Like any migrant, they were very intelligent people, who bravely decided to settle in Strasbourg, on the border between Germany and France, where there were better living conditions," he recalls.

There, his ancestors lived for 200 years before being forced to start up again. The Great Famine, the plague and the wars expelled the Fuchs forever from Europe. They entered the United States on Ellis Island, the same port that received millions of Irish immigrants.

Every time he’s asked, Fox remembers his grandfather the “gringo.” He says he loved him, that in the eight years he shared with him he learned the value of effort and work, "to get up early to milk the cows before we go to school." Perhaps that spirit of the immigrant is a common thread that unites the first Fuchs in Mexico ("the night watchman of a company"), with the Fox that occupied the National Palace. Perhaps that thread is also the one that unites the president with millions of his countrymen in the United States.

"[Trump] will have to take the tax dollars from the Americans and the truth is that I do not think any citizen will agree to spend the sum of 35 billion dollars, that will take to build it."

Vicente Fox's immigrant past and his experience as a manager and politician gave him enough scrolls to speak, question and propose immigration policies along the border.

For him, instead of insisting "on a wall that does not make sense," what the U.S. ruler should do is to look at the experience of Europe, where the richest countries decided to open their borders and invest in their poorest neighbors to create common wealth. "There are a thousand ways to create jobs and Americans simply chose the worst of them all."

The former president has no doubt that the political use of fear is what has allowed to set in motion this nationalist machinery that seeks to settle in the United States and represents a sad paradox in a country made up almost exclusively of immigrants. "You do not build a wall in your house unless you are afraid and I do not see anything positive about that," he said while inviting the audience to develop actions that block that agenda.

In the end, Fox doesn’t care about the wall; he knows that a work of such proportions will hardly come true. "[Trump] will have to take the tax dollars from the Americans and the truth is that I do not think any citizen will agree to spend the sum of 35 billion dollars that will take to build it."

In this sense, no matter how many times the accounts are made, the result will always be the same: there is no benefit in putting walls and cut ties between neighboring countries. "Trade is a win-win situation," he repeated several times - as if it were a prophecy - to emphasize that any measure the United States takes against it will be a catastrophe on both sides of the border.

Read below part of the exclusive interview Vicente Fox gave to AL DÍA News.
When you were president, you used your good relationship with George W. Bush to push for an immigration agreement. These efforts were hampered by the September 11 attacks. Does any of that apply today?

President Bush and I forged a great friendship since our time as governors, he’s of Texas and I’m of Guanajuato. After he took office, we began working on a joint immigration reform proposal.

For example, we proposed that all undocumented workers in the United States might have a special permit to stay, as long as they were employed.

Second, at that time it was estimated that if the US economy grew by an average of 2.5%, the country would need at least 500,000 new workers every year. The proposal then was to create a model of guest workers to fill those vacancies.

Finally, we suggested that no family should be separated and in that sense every worker with permission to stay here had the right to bring his family along.

None of these options provided the option of obtaining citizenship here. I sincerely believe that the solutions to a secure and orderly border are contained in that document; unfortunately it has remained 15 years in the Congress.

Do you think that someday we will have an opportunity like that to achieve an immigration reform similar to the one you and Bush proposed?

Not for the next four years, but maybe sooner (laughs).

When Donald Trump's candidacy aroused laughter and teasing here, you were one of the first to draw attention to the possibility of him arriving at the White House. What happened to us? Why didn’t we see what you did?

There are two implicit questions. In Latin America we were once in the hands of dictatorships, messianic and populist leaders for much of the 20th century, that is why Latin Americans can recognize the dictatorial nature of any candidate's genes and (Trump) met many of these characteristics.

How did he get to the White House? I don’t know, that's something I still try to understand. For me he is an illegitimate president for two concrete reasons: first because he lost the popular election by more than 3 million votes. Second, because if a person does not behave or acts as a president then he is not a president.

How do you think he's going to do?

I think he's going to have a lot of difficulties. I went through a similar path, from the private sector to the public one, and it’s not the same to run a business as to govern a country. (Being in government) means that you have to adapt, change, conciliate, negotiate and unite people. You rule for all, not only for your supporters.

Some of your critics in Mexico say that you have many things in common with Trump, one of them perhaps having to do with how you express yourself. What do you say to them?

I believe there are profound differences between the two of us. I am a respectful person, especially of the dignity of others. I have a very strong respect for human rights. I work to provide opportunities for the poor and those with disabilities. I am not an egomaniac or narcissist, I am a humble person. In addition, my decision to move to politics had to do with my concept of happiness: being able to be useful to others. That has been my life and in that sense I think there are big differences with his.

You are a businessman too and have said that the intentions of the United States to withdraw or change the terms of the North American Free Trade Agreement (NAFTA) would be counterproductive for the country.

What is the relationship between trade and migration?

When NAFTA began to run, Mexico's average income in relation to the U.S. was $1 for every $10. That was a great incentive for anyone to decide to emigrate.

Today the difference has been reduced. For every dollar that someone receives in Mexico, here he would receive five. I really believe that in a generation, the incomes of both countries will be comparable. So what motivation will someone have to come? Any. So what we must do is what was done in Europe: the richest countries invested in their poorest neighbors and generated commonwealth. What we need is economic development in Mexico, that is the best way to reduce migration.

What message would you give to your fellow citizens in Philadelphia, who have been affected by this new hate speech?

To have courage. To be proud of being Mexicans. I would say keep doing your job, keep working and being decent. Defend your family. Nothing is going to happen, this guy is going away pretty soon.