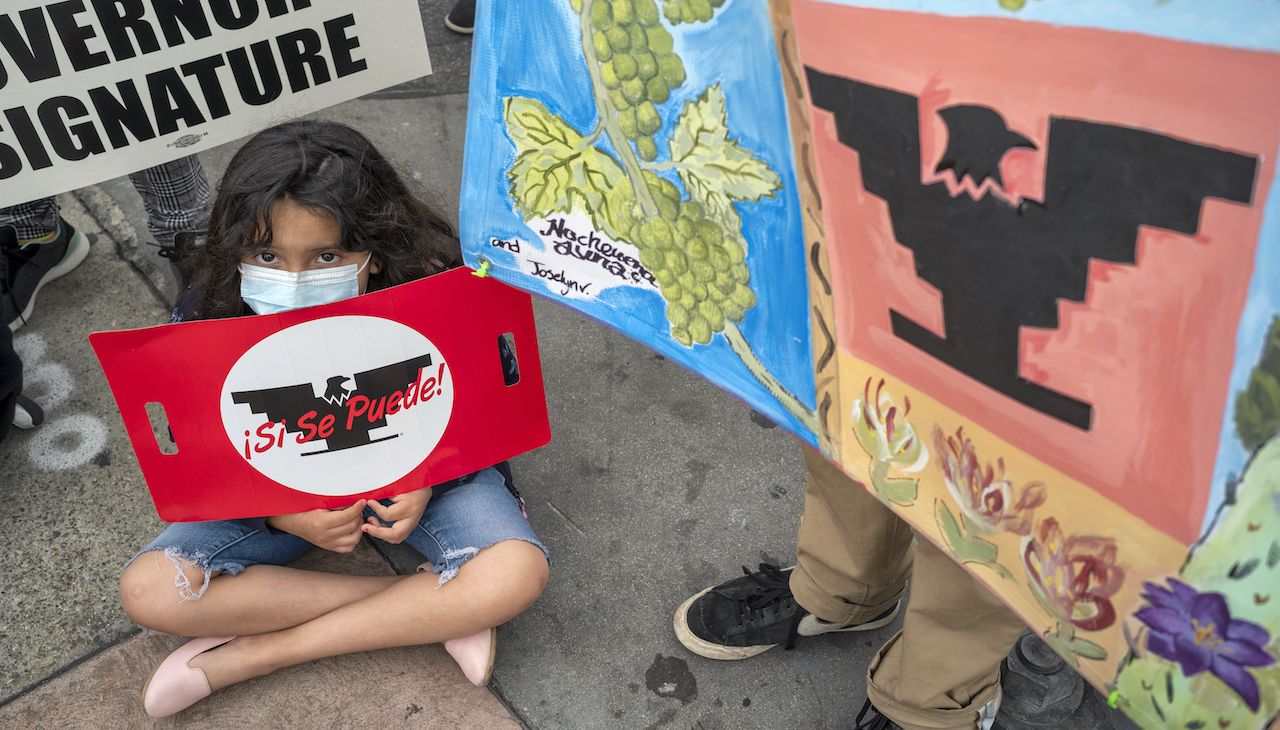 United Farm Workers’ “March for the Governor’s Signature,” to conclude in Sacramento this Friday

The 24-day, 335 mile march is to get Gov. Newsom’s signature on AB-2183, which would allow farm workers to vote in union elections from home.

The United Farm Workers (UFW), founded 60 years ago this year by Cesar Chaves and Dolores Huerta, and more than 56 years after Chaves’ historic march to Sacramento, the organization kicked off another march to the state capital on Aug. 3.

This time around, the union is seeking Governor Gavin Newsom’s signature on Assembly Bill-2183, which would allow farm workers to vote in union elections through mail from home and guarantee more voting rights overall. The bill titled the Agricultural Labor Relations Voting act, was authored by Assemblymember Mark Stone out of Santa Cruz.

The bill is expected to pass, but is currently awaiting approval from the state Senate. According to UFW, it would eliminate intimidation from farm growers and others, and allow union members to vote without fear of retaliation. The bill resembles one vetoed last year by Newsom, who cited “inconsistencies and procedural issues.” This did not go over well with the union, as they campaigned for Newsom ahead of California’s recent recall vote.

In protest of the veto, the union marched from the well-known restaurant, “French Laundry” in which the governor was caught dining during the height of the COVID-19 pandemic after installing stay at home orders for all Californians, to PlumpJack Winery, which Newsom founded.

Opponents of the bill cite that it would undermine the system already in place by which farmworkers are allowed to vote in secret, which they refer to as the “card check” bill. The state’s last three governors, Arnold Schwarzenegger, Jerry Brown, and now Newsom have vetoed similar pieces of legislation. Even the California Chamber of Commerce has opposed the new version of the bill, placing it on the “job killers” list.

As of now, during union elections, farmworkers have to vote in-person usually on the property of the grower in accordance with the state’s Agriculture Labor Relations Act, which many feel is an intimidation tactic. The new bill would allow for them to vote from their home, through mail, and even in a more traditional voting place.

Despite the triple-digit temperatures in the San Joaquin Valley and California overall, the group of marchers made up of over 26 UFW members, have marched over 22 miles a day in the heat in the last two weeks.

Huerta, one of the founding members along with Chaves, now 92 years old, was there to support the marchers from Manteca to Stockton on Aug. 20, the same day the heat reached a record 104 degrees. The march continues and will conclude when they reach the capital on Friday, Aug. 26, where there will be a huge rally to further pressure the governor.

Aug. 26 is also the day that Newsom declared to be “California Farmworker Day” last year.

Even with the heat and its mental and physical toll on the body, the marchers have been met with communal support at every stop since the beginning of the march. Some supporters have swapped shoes with the marchers, Catholic priests have blessed them, and they’ve even received support from cab drivers and bike clubs. Some of the core marchers are people in their 50s and 60s, all the more to show their resilience and willingness to suffer for rights.

Along with the core group of marchers, other marchers have included Martin Luther King III, whose father Dr. Martin Luther King Jr. who supported Chaves in his fight for rights during the 1960’s, California labor movement leader Lorena Gonzalez, Cesar Chaves’ grandsons, and other activists and community members.