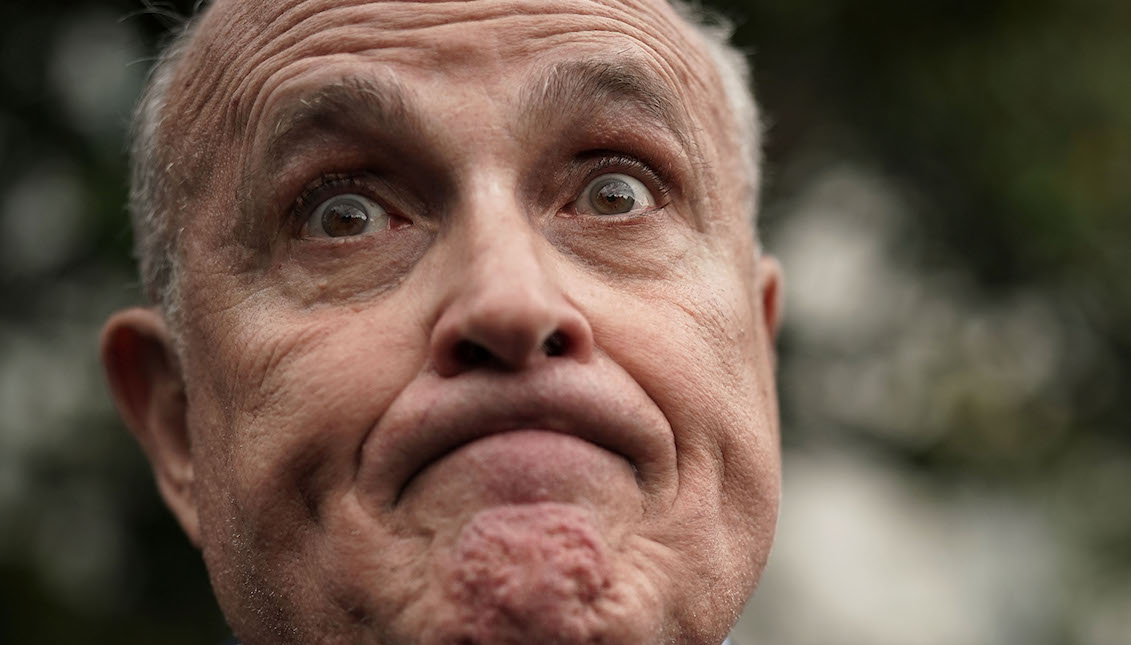 WASHINGTON, DC - MAY 30: Rudy Giuliani, former New York City mayor and current lawyer for U.S. President Donald Trump, speaks to members of the media during a White House Sports and Fitness Day at the South Lawn of the White House May 30, 2018 in…

What did Rudy Giuliani do exactly?

Donald Trump’s impeachment saga is becoming increasingly similar to an international conspiracy thriller - with a screenwriter who doesn’t know whether to be dramatic or funny.

In the midst of the biggest political scandal in recent decades, the Trump Administration struggles to maintain several fronts: a stalled confrontation with Congress; a foreign policy that goes against the country's tradition, and a personal lawyer that has a knack for muddying waters.

According to the Washington Post, two associates of President Trump’s personal attorney Rudy Giuliani were arrested just before embarking on a one-way flight to Vienna, after being charged with "channeling foreign money to U.S. politicians while trying to influence relations between the United States and Ukraine."

Lev Parnas and Igor Fruman, two U.S. citizens, based in Florida and born in Ukraine, were arrested on an order from the U.S. attorney's office in Manhattan – ironically, a position once held by Giuliani himself.

While the arrest has to do with the violation of campaign finance laws for channeling money from foreign billionaire donors to a Republican Political Action Committee, the relationship between Parnas, Fruman, and Giuliani has more to do with a more recent issue: a phone call between Donald Trump and Ukrainian President Volodymyr Zelensky.

The arrests "mark the first criminal charges to emerge from the U.S. government’s suddenly controversial relationship with Ukraine," explains the Post, "a complex web of financial and political interactions linking diplomacy to alleged violations of campaign finance law.”

Why is it so serious?

Faced with the Democratic accusation of President Trump's abuse of power by retaining military funds granted by Congress to Ukraine in exchange for damaging information on a political opponent - Joe Biden - Giuliani has come out to defend his main client tooth and nail.

According to the lawyer, Trump was only investigating alleged corruption stratagems by the former vice president's son, Hunter Biden, in his role as a board member of a Ukrainian private company.

However, the new conviction of the two Giuliani associates has uncovered years of "commercial and legal" collaborations between the three individuals.

Through Republican political circles, Giuliani allied with Lev Parnas last year in a consulting company for "hundreds of thousands of dollars," according to the New York Times.

Giuliani would have hired Parnas and Fruman to get “evidence in Ukraine” that would undermine the legitimacy of the investigation by special lawyer Robert Mueller about Russian interference in the 2016 elections.

The accusation exposes the participation of the two Ukrainians in the dismissal of the U.S. ambassador to Ukraine, their frequent meetings with Giuliani at the Trump International Hotel in Washington, and their strategies to illegally channel money to Republican campaigns in the country.

And for those who still had doubts, the Jewish Insider posted a video of 2018 showing Giuliani with Parnas and Fruman at the Trump hotel, sending greetings to Rabbi Moshe Azman, president of the Anatevka Jewish Refugee Community in Kiev, and where the lawyer says: "I can't wait to go back (to Ukraine).”

This new material gives more weight to the judicial committees’ subpoenas against Giuliani to offer documentation regarding his business and connections in the matter.

Both Parnas and Fruman were asked to appear before Congress but refused to do so and, after paying million dollar bails, have been released on parole with ankle monitors for fear they may leave the country.

This Friday, the former U.S. ambassador to Ukraine, Marie L. Yovanotich, will testify before the House Judicial Committee to try to give more light to this intricate matter.