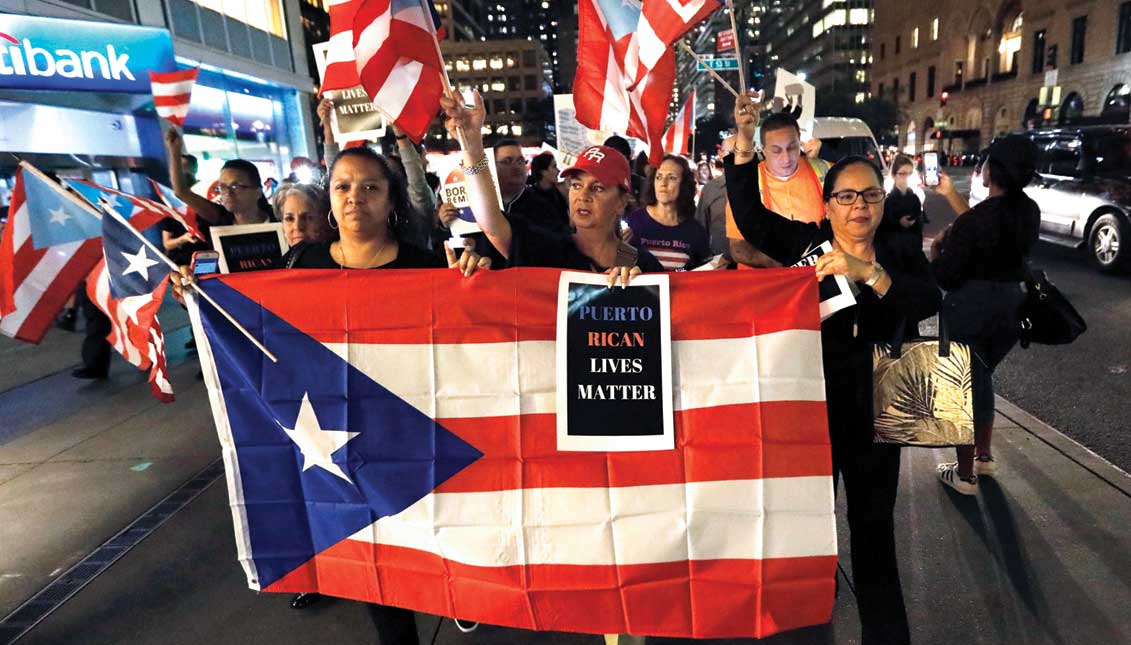 Hundreds of people protest near Trump Tower after a service for the victims of Hurricane Maria on Thursday, September 20, at the Church of St. Bartholomew in New York. EFE

Now we know, Emperor Trump has spoken and the whole world is in awe: no statehood for Puerto Rico as long as there are critics in office.

Well, okay, not the whole world, but his arrogance and callousness are certainly awe-inspiring.

In any case, only the vendepatrias and space cadets of governor “Ricky” Rosselló’s pro-statehood party, Partido Nuevo Progresista (PNP), believed – or said they believed — they could finish the job of obliterating once and for all the nation of Puerto Rico by selling it – or giving it away — to the likes of Trump, or to the U.S., the colonial power that made of the proud island the longest existing colony in the world. Everybody else knew – especially after Trump’s “paper towel diplomacy” – that the U.S. never wanted beautiful Borinquen to become the 51st state, critics in office or not. Which, ironically, is wonderful.

The “critics” Trump was talking about were none other than San Juan Mayor Carmen Yulín Cruz, the only Puerto Rican elected official with the guts and the decency to publicly call his bluff and tell the truth about his despicable response to the trail of deaths and destruction left by Hurricanes María and Irma last year.

The U.S. President, a self-confessed sexual predator, this week came out swinging for Supreme Court nominee Brett Kavanaugh, who stands accused by two women of sexually harassing them. And during a Monday interview with Fox News controversial journalist Geraldo Rivera, a Puerto Rican, he made clear again how much he hates Yulín Cruz, the woman who had the audacity to criticize the emperor:

“With the mayor of San Juan as bad as she is and as incompetent as she is, Puerto Rico shouldn’t be talking about statehood until they get some people that really know what they’re doing,” Trump told Rivera. How a man who has managed to make a mockery of the presidency dares to call anybody incompetent is beyond comprehension.

When “you have good leadership,” he said, statehood for Puerto Rico could be “something they talk about. With people like that involved in Puerto Rico, I would be an absolute no.”

Oh, no, that includes Ricky and his people even though they have been genuflecting at their master’s altar since day one of his presidency. There is a lesson here somewhere for all those who still believe that giving up their dignity is going to earn them the sympathy, if not the respect, of the colonizer.

Despite Rosselló’s and the other PNP bigwigs’ weeping and gnashing of teeth after Trump’s put them in their place despite their abject obsequiousness, for Puerto Rico, Trump’s imperial dictum could be as illuminating as the biblical road to Damascus.

“This has been ever thus (but)Trump just stopped sugar coating it,” Puerto Rican writer and journalist Susanne Ramírez de Arellano wrote on Facebook. “We must, though, say thank you and ask for the address where to send the gift basket, because Trump has given Puerto Rico a HUGE gift. The evisceration of the PNP party. A Mayan extraction of its heart.”

History works in mysterious – and sometimes, ironic —ways. For Puerto Rico, the road to Damascus may finally conduct to the independence its people, its culture and its history so richly deserve.