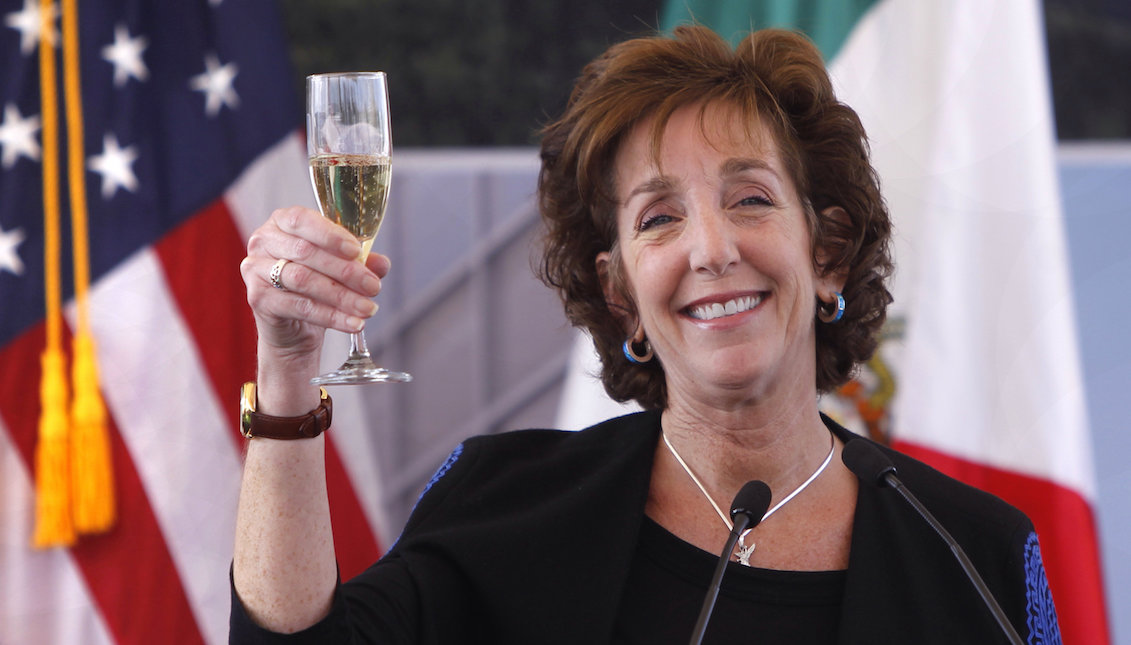 The United States Ambassador in Mexico announced Thursday that she will leave the position "to look for new opportunities". EFE / Sáshenka Gutierrez / ARCHIVE

Trump's strategy with the American Embassy in Mexico

After the resignation of the popular American ambassador in Mexico, Roberta Jacobson, Trump has chosen an automotive mogul as her possible replacement.

At a key moment in diplomatic relations between neighboring countries, the US ambassador to Mexico, Roberta Jacobson, announced through her Twitter account, and in Spanish, that she will leave the office at the beginning of May, "to look for new opportunities."

After 31 years working for the US government, and a career full of diplomatic achievements, Jacobson joins the list of government officials who leave Trump's ship, along with Ambassador Joseph Yun (diplomat in charge of policies with North Korea) and Ambassador John Feeley in Panama, as CNN explained.

Jacobson added that her decision had been made "knowing that the Mexico - United States relationship is strong and crucial and that the incredible team of our mission in Mexico will continue to make sure that it remains so."

Being one of the last remnants of the Obama administration, Jacobson has left the position without confirming who would succeed her, but on Thursday several media reported that President Trump would already have a candidate in mind.

According to the Mexican newspaper Reforma (in Spanish), Trump would have nominated former General Motors CEO Edward Whitacre Jr. as Jacobson's successor and would be waiting for his confirmation.

An official press release from the Mexican government has stated that "it is the responsibility of the US government to inform the public about who has been assigned to direct its embassy in Mexico," The Hill reported.

If the nomination of Whitacre Jr. is true, diplomatic relations with Mexico would be taking a more economic than political turn, suggesting an approach to the conflict between the two countries that focuses more on business border agreements than on smoothing rough edges.

Mexico: conditions are in place to save the 10 miners
August 12th, 2022
How the African American Museum of Dallas seeks to change perspectives on the African experience in the Americas
April 8th, 2022
Artist from Cartagena presents his work in Mexico
March 30th, 2022

Whitacre was an automobile executive with strong connections in Mexico, including a deep friendship with the richest man in the country, Carlos Slim.

The intervention of GM's former executive director could be aimed at the renegotiation of the trade agreement between Canada, the United States and Mexico (NAFTA), which has already survived six sessions, with one last set for March 6, BBC explained.

Baker McKenzie, the coordinator of Latin America’s foreign trade of the international law firm Baker Mckenzie, explained that "one of the issues where there is a big gap to reach an agreement is that of rules of origin in the automotive sector”.

The Mexican Association of the Automotive Industry (AMIA), maintained its position with respect to the rules of origin, noting that they must be preserved "as they are currently in the North American Free Trade Agreement," something the United States is not completely in line with, because it insists on the modification of the American benefit for the national pieces that are assembled in Mexico, according to the Mexican newspaper 24 Horas (in Spanish).

It is expected that the Mexican front will insist on these clauses, considering that it is one of the few aspects of the agreement that has had "a notorious success for Mexico (...) promoting the development of a huge automotive industry in the center and north of the country, one of the regions of the world that already competes and sometimes beats Detroit in the production of cars", as the BBC continues.

Between the impending presidential elections in Mexico and the mid-term elections in the United States, the nomination of Whitacre Jr. to the US embassy is perceived as an advance of pawns on a chessboard that Trump insists on playing as a businessman rather than as a President.