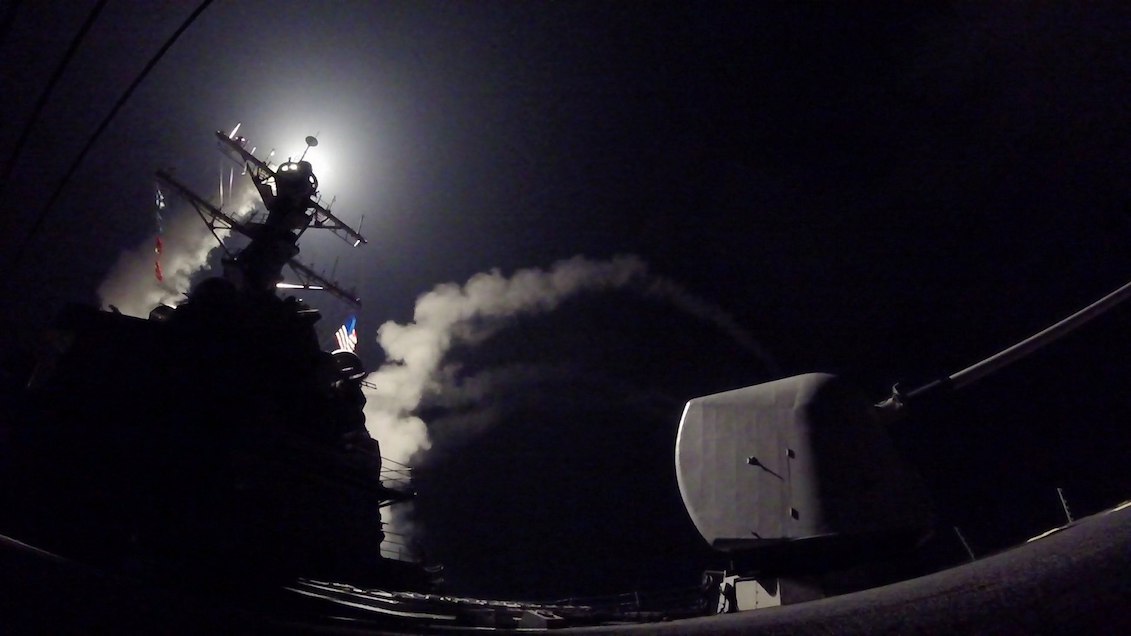 Moment of the launch of a self-guided missile from the destroyer USS Porter (DDG-78) at an unspecified point on the Mediterranean Sea, early morning today, April 7, 2017. EFE / Seaman Ford Williams / US Navy / Handout

During early hours of Friday (Damascus time), the United States government deployed a bombing to an airbase in central Syria.

President Donald Trump authorized the launching of 59 Tomahawk cruise missiles from the USS Ross and Porter warships located in the Eastern Mediterranean.

The target was the Shayrat air base near the town of Homs, identified by US intelligence as the base used for launching the chemical attack deployed by Bashar al-Assad’s government on Tuesday over Kahn Sheikun, a city dominated by the Rebels that lost more than 80 civilians.

Syrian and Russian forces used the airbase since the fall of 2015. The Russian Government was warned by the United States of the attack to have its agents withdrawn from the airbase in time.

Each Tomahawk missile is 6.25 meters long and weighs 1,590kg. It is a weapon that supports any weather and has a long range, being able to support up to 454kg of explosive heads.

But the damage done by US government missiles would not have been severe. According to The Guardian, the missiles aimed at airplanes, shelters, fuel tanks and other logistic buildings, air defense systems, radars and ammunition bunkers. The Syrian armed force reported seven dead and several seriously injured, six aircraft destroyed and other minor damage, but the Russian defense minister said the runways are intact.

A Radical Change of Posture

The authorization of the bombing of the Syrian air base is a radical change in Donald Trump’s position facing the conflict that has submitted to the Arab country for six years.

This would be the first direct attack by US military forces inside Syrian territory, and the trigger was the devastating chemical bombardment that Bashar Al-Assad directed against his own people on Tuesday, proving that he never gave up chemical weapons, as was agreed after the first attack in 2013, and that Russia was always aware of it, if not backing it.

The Kremlin has assured that the Syrian army does not have deposits of chemical weapons, and has affirmed that "the destruction of all the arsenals of chemical weapons belonging to the Armed Forces of Syria was fixed and confirmed by the Organization of Prohibition of Chemical Weapons", according to El País.

But the strong images of Tuesday shook the world and were testimony that the conflict is far from being solved. President Trump himself witnessed them and stated that "when you murder innocent children, innocent babies, babies ... small babies with a lethal chemical gas, people were shocked to know what the gas was; this is crossing many, many lines. "

But his decisions were not made clear until his declaration from his Mar-a-Lago property: "Tonight, I ordered a military attack on an air base in Syria from where the chemical attack was conducted. It is the vital national interest of United States Security to prevent and stop the spread and use of deadly chemical weapons. "

While Trump's retaliatory measure seemed to agree with the critical lines of many diplomatic personalities, his decision did not come without question.

Echoing his own criticism in 2013 to the Obama administration, when contemplating the possibility of an attack on Syrian soil, Donald Trump has been questioned about the constitutionality of his decision because, as he wrote on Twitter on August 31 Of 2013, "the President must have Congressional approval for an attack on Syria."

Within the Congress reactions were diverse: Florida Senator Marco Rubio praised the attack as a "tactical action pursuing a goal." Also, John McCain and Lindsey Graham also agreed to use military force against the Syrian president.

Republican Senator Rand Paul argued that, while condemning the atrocities carried out in Syria, the United States had not been attacked, so that a military response was not necessary and, therefore, the President needed the authorization of the Congress to carry out a military action.

Opinions are polarized within Congress, with no party exclusivity, according to The Atlantic.

At an international level, in Brussels, Jens Stoltenberg (NATO Secretary General) said that the Assad regime "holds full responsibility for this development. NATO has consistently condemned Syria for the continued use of chemical weapons as a clear violation of International standards and agreements ".

This statement was supported by a joint statement between German Chancellor Angela Merkel and French President François Hollande, who asserted that "Assad is solely responsible for this situation" and urged the United Nations to implement Security Council Resolution 2254 for a political transition in Syria.

For his part, a spokesperson for President Erdogan requested a flight-free zone to safeguard Syrian civilians.

And finally, according to The Atlantic, "Saudi Arabia called the decision 'brave' while China, whose president met with Trump on Thursday night, called for calm: 'What is urgent now is to avoid the situation to further deteriorate, "said Hua Chunying.

But Russia's response came swiftly. President Vladimir Putin has accused the United States of "planning a unilateral military intervention before the chemical attack", and has suspended the agreement between the two countries avoiding air incidents in Syria, according to El País.

Assumptions of this kind only raise questions about the sources of information that Russia may or may not have within the Trump Administration. According to official reports, Russian President Dmitri Peskov's press chief would have confirmed that the Kremlin was warned of the attack but "did not detail how far in advance".

According to the Spanish newspaper, the respected military expert Alexéi Arbátov of the Russian Academy of Sciences does not agree with the cancellation of the bilateral agreement, and considers that the American bombing "was an isolated adventure in order to increase the popularity of President Trump in the field of domestic politics. "

A statement from the Russian Foreign Ministry says that US action makes it almost impossible for a Russian-American coalition to rise to fight terrorism, which would be the appropriate solution to a conflict that plagues the international community.

According to Russia, the United States ignored the OPCW's assessments of chemical disarmament in Syria and that the government could not have used such weapons again.

For its part, the Syrian government has described the attack as an "error in American strategy". "It makes the United States a partner of ISIS, the Nusra Front and other terrorist organizations that have been attacking Syrian military posts," according to a statement of the armed forces.

The most logical reaction of all skeptical critics, journalists and observers is the same: Donald Trump forbids the entry of Syrians into the country but approves a bombing after realizing the gravity of the situation.

Apparently the new president has had a little trouble transitioning from civil to head of state thinking.

Not everything is clear after President Trump's surprise attack on the Syrian-Russian airbase.

What measures will Russia take?
Would Steve Bannon's exit from the Security Council have anything to do with Trump's decision on Syria?
Was there any kind of pre-attack communication between the US and Russian government?
Will Donald Trump be aware of what armed intervention means in an Arab conflict?

What is perfectly clear is that the popularity of the President has risen almost hand in hand with oil prices today.