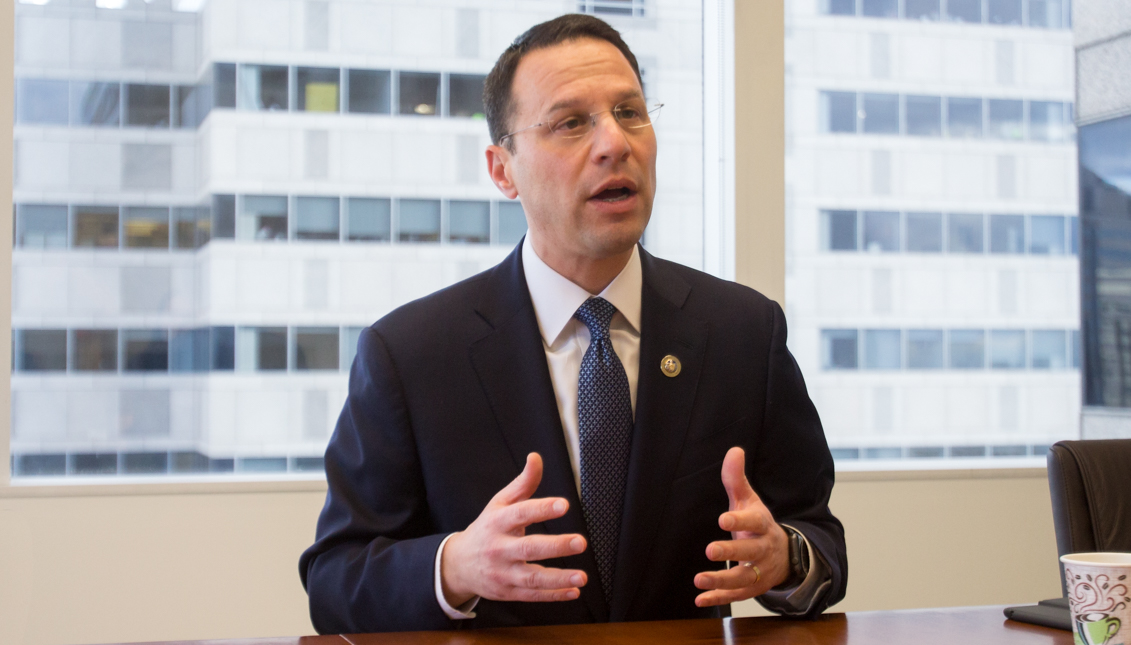 Attorney General Josh Shapiro: A Year in His Eyes

Josh Shapiro, the 44-year-old who now holds the title of 50th Attorney General of Pennsylvania, has just celebrated his first anniversary as the incumbent…

“We inherited some real challenges… Some would say we inherited a mess," said Shapiro, with calm reproach in his tone.
Given the Attorney General of Pennsylvania's predecessor, and the sordid legacy she left in her wake, Shapiro was left to pick up the fragmented pieces of public trust Kathleen Kane shattered.
And, like anybody who has ever breached trust or had their trust broken knows, mending faith is no easy feat.
The first thing that Shapiro did was restore integrity to the Office, even before he assumed his role. Days before being instated, Shapiro appointed ethics expert Eric Fillman to serve as Pennsylvania's first Chief Integrity Officer. A similar move was orchestrated by Larry Krasner, who wasted no time in cleaning up Philadelphia's District Attorney Office.
Out with the old, in with the just.

Working alongside Fillman, the Office of The Attorney General of Pennsylvania signed a new Code of Conduct and mandated ethics training for all of their staff members.

"I think if you have integrity in your office, and you infuse, you know, justice in everything that you do, then people will have confidence in the work that you're doing and think that what you're doing is fair."

So far, Shapiro has made progressive statements and has backed rulings that have been palatable for many Pennsylvanians, tackling the hot-button issues of DACA, the opioid and heroin epidemic, medical marijuana, fraud, and women's rights with prudence, perseverance and, of course, with integrity.
Though I have spoken with Shapiro in the past on some of these topics, I was lucky enough to meet with The Attorney General in person on Wednesday, January 24th in a gorgeous high-rise on 20th and Market Street.
There, I asked Shapiro his thoughts on pressing matters in the Commonwealth, and how he and his Office have addressed or will be addressing them:
On DACA and Sanctuary Cities
This past September, Shapiro was among fifteen Attorneys General who filed a lawsuit to challenge President Trump's initial decision to rescind the Deferred Action for Childhood Arrivals program.
Since then, DACA has been the central contention behind government shutdowns (the next is coming up on February 8th), and the fate of nearly 800,000 people in our country is still uncertain.
"The Federal Government must lead on immigration. They have a responsibility to come up with a solution, and it needs to be just. It needs to bring people out of the shadows, it needs to recognize our immigrant community for the strong, vibrant community they are, and the contributions that they are making. I'm going to continue to use the law to protect Dreamers and to ensure that their interests are looked after."
On that note, Shapiro still disagrees with his peer Attorney General Jeff Sessions, specifically on Sessions' disparaging comments questioning the legality of sanctuary cities.
"[Jeff Sessions] overstepped his bounds there," continued Shapiro.
On the Opioid/Heroin Epidemic and Safe-Injection Sites
After Governor Tom Wolf signed a public health Statewide Disaster Declaration earlier this month, officially deeming Pennsylvania an "Opioid Disaster Zone," Pennsylvania government officials have been working toward solutions for the crisis. However, the matter of "safe-injection sites," has been a thorny one.
For Shapiro, the answer is clear: there is no safe way to inject yourself with these drugs.

"What I am searching for is not a pathway to 'safe' injection, but a pathway to treatment for individuals who want it. That's my first point. The second point is, this presents serious public safety concerns."

For our Latino readers, Shapiro specifically mentioned Kensington as being an area he is concerned about, knowing that there is a large Latino community there that could be subjected to the cons of safe-injection sites.
Amethyst Recovery Center, located in Port St. Lucie, has theorized that safe-injection sites have the likelihood of becoming "safe havens" for "users, peddlers, and predators."
Shapiro also cited the "tremendous legal hurdles" of safe-injection sites as a reason why he is against their implementation.

"I would rather we spend our time focusing on shutting down the major drug pipelines in our communities and creating more avenues for treatment."

"It's my job to defend the laws of the Commonwealth of Pennsylvania, whether they are undermined by a drug dealer or some corporation, or even undermined by an act of the federal government. My job is to defend the State's law, so I will continue to defend our medical marijuana policies."

On Diversity and Employment Opportunities at The Attorney General’s Office
Currently, the Attorney General's Office in Pennsylvania is the most diverse in history. 16% of hires identify as People of Color, and women occupy more positions of leadership than men do.
Like the position of "Chief Integrity Officer," Shapiro created another new and forward-thinking role for Pennsylvania government based in Harrisburg: Chief Diversity and Inclusion Officer.
Shapiro is also a firm believer in the value of internships:
"If you get an internship somewhere, that's a pathway to getting a job, so part of our internship outreach has been to the Latino community, African Americans, LGBT, to make sure that they are aware of the multitude of opportunities there are. So, I'm really proud of what we've built, but I want to do even better, and I think we're well on our way to doing it."
On the Democratic Party in Pennsylvania (And, Specifically in Philadelphia)
As mentioned earlier in this article, the Democratic Party in Pennsylvania has had its trials and tribulations to endure, dealing with corruption and scandals.
But, Philadelphia has had a breadth of new Democratic leaders emerge that have, in Shapiro's words, "not just made our politics better, but most importantly, will make our government a lot better."
Shapiro gave shout-outs to Helen Gym, Maria Quiñones-Sánchez (a good friend of Shapiro's), Rebecca Rhynhart, and Darrell Clarke, and commended them for "what they're bringing to the table, and their ideas, and their values, and how hard they're willing to work."
Still, even as a proud Democrat, Shapiro works "really hard to forge food relationships with Democrats and Republicans" because he sees his role as Attorney General to be, above all else, one that "focuses on a rule of law, focuses on administering justice in a fair manner" and not one that "focuses on one party or the other."
On the Amazon HQ2 Decision
"You're not going to make me choose, right?!" laughed Shapiro.

“You’re not going to make me choose, right?!” We sat down with Attorney General Josh Shapiro on Wednesday afternoon, and he gave us his hot take on the Pittsburgh vs. Philadelphia debate for Amazon’s second HQ. #amazon #philadelphia #pittsburgh #joshshapiro

While Shapiro answered this question like a sagacious and seasoned politician, I will interject with my own subjectivity and bias that, well... #PhillyDelivers!