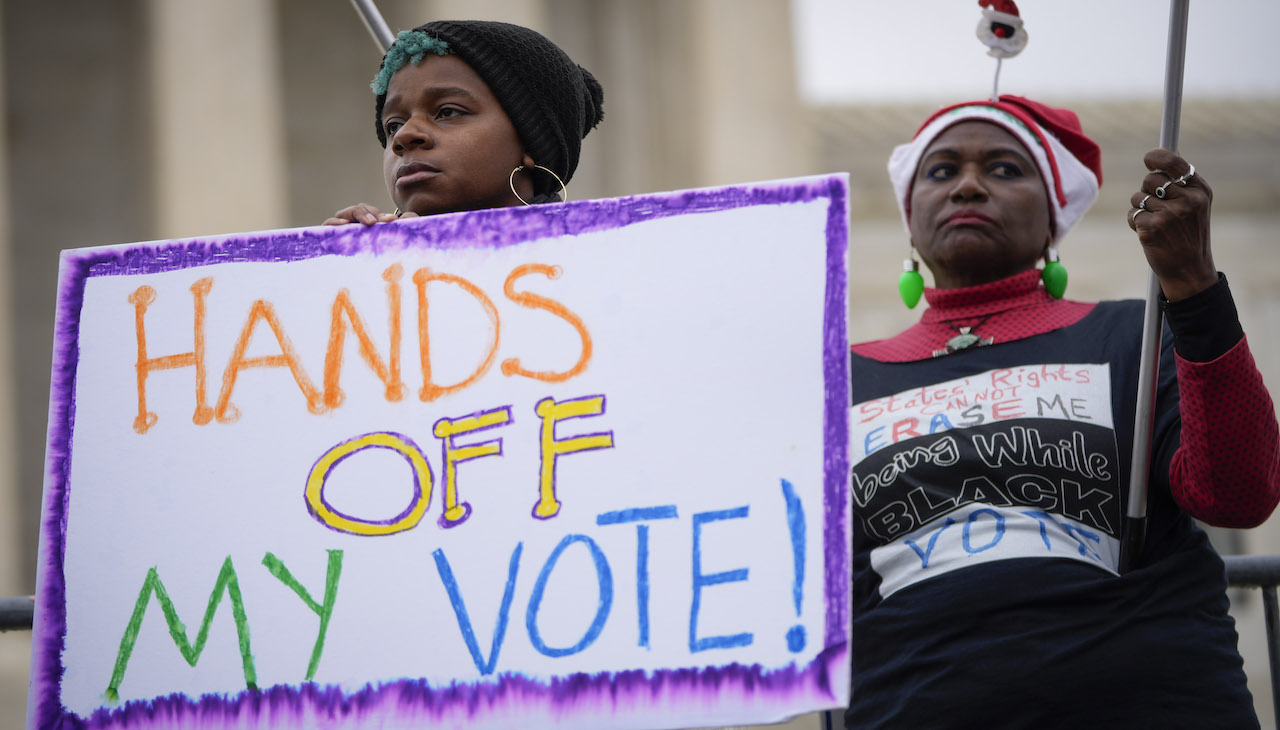 Protestors were out in force in front of the Supreme Court as it heard arguments for Moore v. Harper. Photo: Drew Angerer/Getty Images

The Supreme Court takes on a crucial voting rights case

The case concerns whether to adopt a controversial legal theory that would drastically change the makeup of voting in this country.

As 2022 comes to a conclusion, the Supreme Court has been taking on many important cases that vary across the spectrum of topics. One in particular being tackled on Dec. 7 concerns voting rights and more importantly, a theory that would completely change the makeup of how voting is done in federal elections and the power state legislatures would have in the process.

On Wednesday, Dec. 7, the Supreme Court heard arguments about whether the country should enact a legal theory known as the “Independent State Legislature” theory, that would provide state legislatures vast and to a great degree, unrestrained power over many of the election rules we have, one of which involves drawing congressional maps corrupted by partisan gerrymandering.

The theory would cause a lot of different implications in regards to voting, with one of them being that no part or affiliation of a state government can change a legislature’s activity or movements on federal elections.

State supreme courts would not be able to require state laws to comply and bend to state constitutions, state governors could not use their veto power to shut down bills concerning federal elections, election administrators would not be able to issue rulings that would modify legislative enactments, and that voters could not construct independent redistricting commissions to tackle gerrymandering.

If adopted, a much more aggressive version of the theory would stop state courts from voicing their opinions over arguments concerning anything from last minute polling place changes, voter ID and jeopardize voter-passed legislations such as independent redistricting commissions.

The Independent State Legislature Theory stems from a piece of the Constitution’s Elections Clause that reads: “The times, places and manner of holding elections for senators and representatives, shall be prescribed in each state by the legislature thereof.”

Questions are also being raised about how adopting the theory could influence the rules regarding selection of presidential electors. Many legal experts have expressed that they do not believe this particular case will have any consequences, if any at all, on future presidential elections, including the one in two years.

Wednesday’s case – Moore v. Harper, No. 21-1271 – will examine a rejected voting map drawn up by the North Carolina Legislature because of its alleged partisan gerrymander by the state’s Supreme Court.

The state court also refused the argument that they were not able to review the actions of the state legislature. They argued that adopting such a theory would be “repugnant to the sovereignty of states, the authority of state constitutions and the independence of state courts, and would produce absurd and dangerous consequences.”

Many of those Republicans looking to bring back the aforementioned legislative map, went to the U.S. Supreme Court, where they asked them to step in. In their emergency application this past February, they stated that the state court had been “powerless to act.”

The justices then rejected that request this past March, and the 2022 midterm elections just last month were conducted under a map drawn by experts hired by a state court. As a result, it brought about a 14-member congressional delegation, evenly divided between the GOP and Democrats that is almost a direct reflection of the current state’s partisan divisions.

While the highest court in the nation has never in its history endorsed the aforementioned theory, four of its conservative justices have issued their opinions that from the looks of it, are considering it. Three justices said that they would have granted the application this past March.

“Namely, the extent of a state court’s authority to reject rules adopted by a state legislature for use in conducting federal elections,” they added.

Justice Brett M. Kavanaugh also chimed in and thought it was important.

“The issue is almost certain to keep arising until the court definitively resolves it,” he wrote.

Those choice words from the justices are in the same vein as others given nearly two years ago in October 2020 from Justice Alito, with Justices Gorsuch and Thomas, in which they responded to a situation when the court declined to review whether the Pennsylvania Supreme Court could change deadlines for mail-in ballots set by the state legislature.

“The provisions of the federal Constitution conferring on state legislatures, not state courts, the authority to make rules governing federal elections would be meaningless if a state court could override the rules adopted by the legislature simply by claiming that a state constitutional provision gave the courts the authority to make whatever rules it thought appropriate for the conduct of a fair election,” the justices said at the time.

Justice Gorsuch and Justice Kavanaugh also wrote something similar in opinion that “the Constitution provides that state legislatures — not federal judges, not state judges, not state governors, not other state officials — bear primary responsibility for setting election rules.”

The Supreme Court heard arguments from the GOP lawmakers who said that when it comes to federal elections, state courts have a limited role in reviewing the election rules created by the state legislatures.

According to some of the information trickling out about how the session went, the conservative justices were open to the arguments made but ultimately, hard to determine what the court’s final decision would end up being.