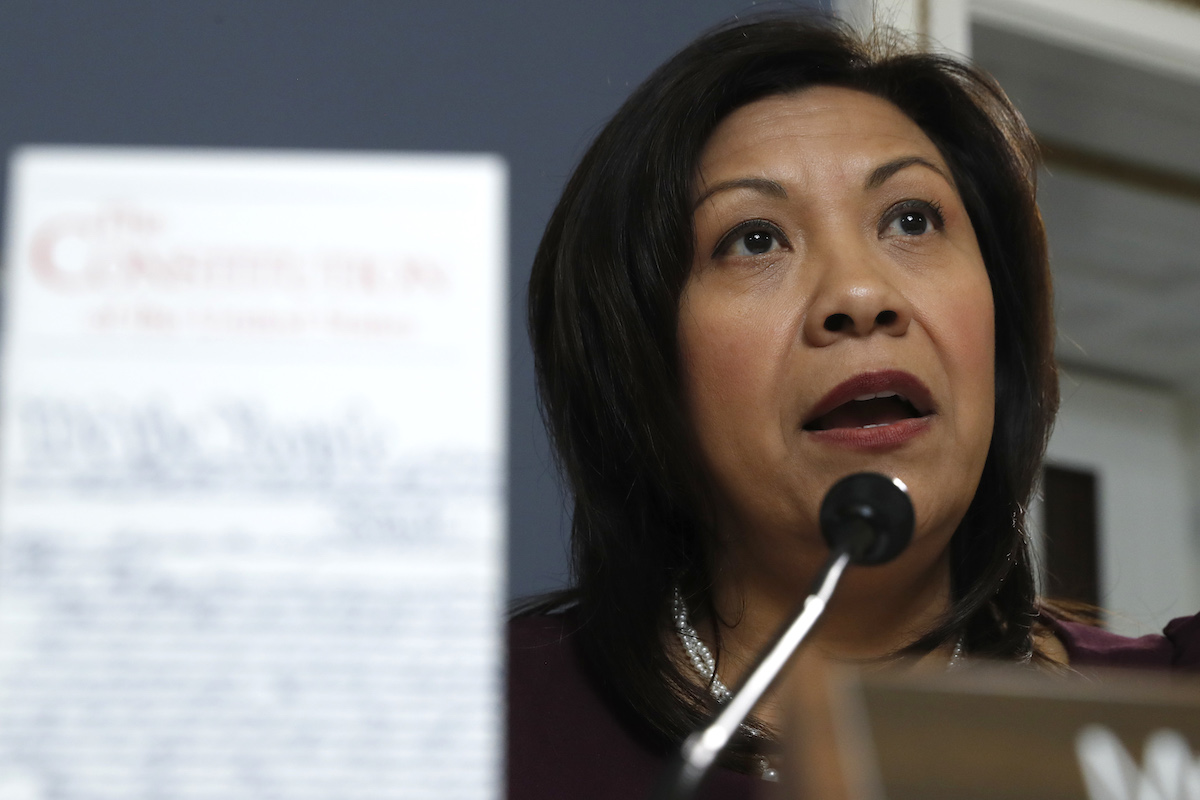 Torres’ office announced she requested a report on corrupt officials in Central American to be delivered to Congress, expected to be delivered this week. Photo: Jacquelyn Martin-Pool/Getty Images

“Send me a pair of glasses so I may see the suffering of your people through your eyes,” Rep. Torrez told President Nayib Bukele.

Rep. Norma Torres (D-CA) has been one of the most outward critics on the root causes of migration to the United States since before the heightened attention given to the southern border.

Since 2019, at the time when migration reached the highest level in years under former President Trump, media outlets used the same language as now, saying the “crisis” is “overwhelming,” and the U.S. government, calling it a “swell.”

Then, Guatemala -born Representative Norma Torres said the issue stemmed from failing to address the root causes of immigration in the Northern Triangle. While she claimed that the Obama administration made strides in Central American intervention (years later, it has little to show for), she did address the many reasons why people from the region made the difficult decision to leave their countries.

“The poverty we see here in our own communities, you know, in comparison to the poverty that has been caused by climate change issues, severe droughts in the region, the fact that there is no infrastructure for the indigenous populations,” Torres told NPR in 2019.

Two years later, under a new administration, little has changed. With the compounded issue of a global pandemic, a still-present climate crisis, and an increase of unaccompanied minors, one could say that apart from sheer volume, the situation has become more precarious.

Yes, the numbers are a continuation from 2019, but the decrease of expulsions of unaccompanied children in 2020 — because of Title 42 — led to an influx of children in 2021 during a pandemic. These are children who have been unable to seek asylum for over a year.

But for legislators like Torres, the root causes for this go beyond the immediate border policies at the border. This is why she shot a tweet at El Salvador’s president, Nayib Bukele last week.

Torres retweeted a “disturbing” video released by U.S. Customs and Border Protection, showing two sisters — ages 3 and 5— being dropped into the United States by smugglers atop a 14-foot portion of the border wall. The children were later picked up by U.S. agents and given medical attention.

"A great shame for the governments of #Guatemala #Honduras #ElSalvador their compatriots deserve governments that are truly committed to fighting corruption and narco[trafficking]!"

The two girls, however, were from Ecuador, and not from any of the three countries Torres admonished. The majority of the unaccompanied minors currently migrating to the U.S. border are from Guatemala, Honduras and El Salvador, or the Northern Triangle.

El Salvador’s President Bukele later barraged Torres on Twitter, urging California voters in her district to vote her out.

“What does El Salvador have to do with this?" he added.

This played into Torres’ point, being that the current migration issue is in part due to the policies of the countries' leaders.

Bukele then told Torres that she should buy some glasses with a portion of her "financier's checks," a jab in reference to billionaire financier George Soros, whose Open Society Foundation says it works on multiple projects throughout Central America to build "just, inclusive democracies," NPR reports.

Torres, who has criticized Bukele’s leadership before, didn’t hesitate, laying some of the blame of the current migration issue on “narcissistic dictators like you interested in being ‘cool’ while people flee by the 1000s & die by the 100s.”

Controversial to some, she attached a graphic photo of an infamous photo of a drowned migrant father and daughter, facedown on the banks of the Rio Grande.

“Send me a pair of glasses so I may see the suffering of your people through your eyes,” Torres told the president.

The back-and-forth gained widespread attention, both for its undiplomatic nature, and  because of the high profile subject involved. In the days since, Torres has continued to advocate for migrant safety abroad in the Northern Triangle region.

She recently relaunched the Congressional Central America Caucus with Rep. Ann Wagner (D-MO) on March 31, and serves as co-chair.

“Every child in Central America deserves a life of dignity and security in their home country – and they deserve a central government that will work to make that happen,” Rep. Torres said in an April 2 press release. “Instead, corrupt elites throughout the region enrich themselves at their people’s expense, leaving Central Americans to suffer in poverty and violence.”

“It does not matter to me who it implicates – it matters to me that we hold those people accountable, and that we help uphold democracy, justice, human rights, and the rule of law across Central America,” Torres said.