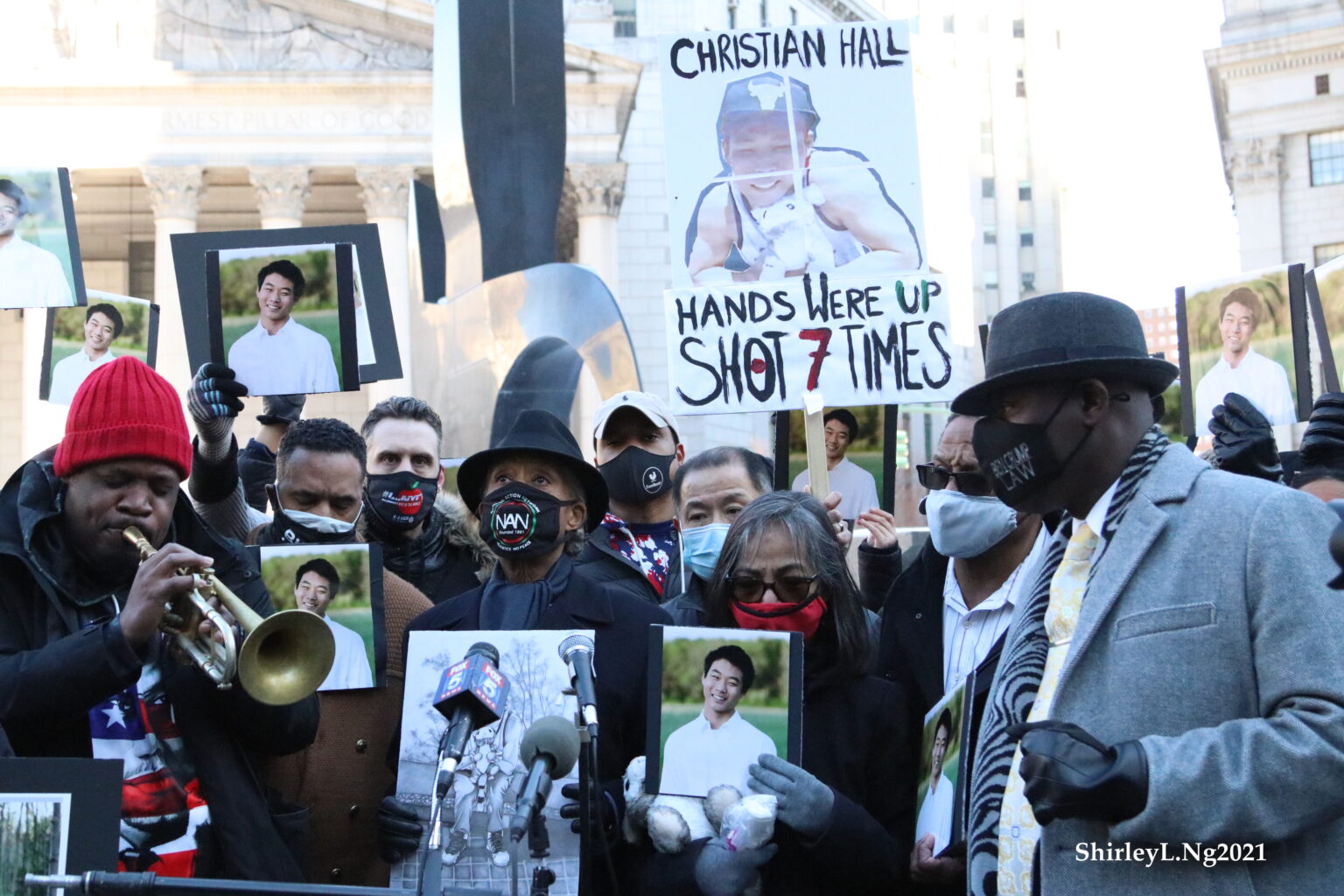 Christian Hall's death at the hands of police is getting a second look after new evidence. Photo: Shirley Ng

The Chinese-American teen was fatally shot during a mental health episode on Dec. 30, 2020.

According to new videos released last week, a Pennsylvania teenager who was in the middle of a mental health crisis had his hands in the air when state police fatally shot him last December.

Christian Hall, a 19-year-old Chinese-American who had been diagnosed with depression, was standing over the ledge of a highway overpass near Stroudsburg, when troopers with the PA State Police tried to convince him to come off the ledge.

Troopers then backed away when they realized that Hall was holding what appeared to be a firearm, which was later determined to be a realistic pellet gun.

Videos obtained by Spotlight PA and NBC News, show that Hall had his hands in the air for 14 seconds on Dec. 30, 2020. The videos show that Hall’s hands remained up, with one of them holding the pellet gun, when two state troopers began firing at him, causing the teen to collapse almost immediately.

Footage previously released by the Monroe County District Attorney’s Office redacted the final seconds before Hall was killed. District Attorney E. David Christine Jr. ruled that the fatal shooting was justified and that no one would be charged because the lives of the troopers were in danger.

Now, Hall’s parents and their attorneys are calling on the Justice Department and the Pennsylvania attorney general to launch an “unbiased” investigation into the shooting that has devastated the family and the northeastern-Pennsylvania community.

Representing the family are attorneys Devon M. Jacob and Benjamin Crump, the same lawyers who represented the family of George Floyd.

.@PAStatePolice lied about Christian Hall's death! He held his hands up for 14 SECONDS right before troopers killed him. Sending prayers to the Hall family as they relive the unjust death of their son. We demand an independent investigation into Christian's death!! pic.twitter.com/gqEtEJkkMH

“Pennsylvania State Police tried to sell one version of events in which Christian was advancing toward them and pointing the supposed gun at them — but now we, and the whole world, know that Christian did not advance toward officers and in fact had his arms raised in the universal position of surrender when he was shot repeatedly and unnecessarily,” Crump said in a statement.

Devon M. Jacob told The Washington Post that the uncensored police footage “definitely establishes that Christian was shot in direct response to an order.”

“The unredacted video establishes that when the fatal shots were fired, Christian was standing still, with his hands in the air, with what was believed to be a gun in his left hand and pointed at the sky, in the universal stance of surrender, and that is an unlawful homicide,’ Jacob said.

“If he doesn’t drop it, just take him,” an official said, according to the video.

Lots of questions in shooting of #ChristianHall:

"Video shows Hall raised his hands after the shots were fired, first to his sides, then above his head. He held the gun in one hand.

“If he doesn’t drop it, just take him,” a voice can be heard saying on the video." https://t.co/yUwVY1fow3

Christian’s father, Gareth Hall, told Spotlight PA that he would like to see the officers brought up on charges.

Hall is one of more than 1,500 examples in recent years in which people with mental illnesses have had fatal encounters with police in the U.S. According to data tracked by The Washington Post, since 2015, nearly one in four people fatally shot by police were mentally ill.

Hall was adopted as a baby from China in 2002 by Gareth and Fe Hall. He was later diagnosed with reactive attachment disorder, a serious condition that can make it difficult for adopted children to bond with their parents and connect with people.

Hall often ran away from his home and once accidentally started a fire in his family’s home when he was 10. After spending four years in juvenile detention for the fire, Hall continued to run away, thus violating his probation and sending him into a cycle of juvenile incarceration.

During the early afternoon on Dec. 30, 2020, Hall called 911 about a possible suicide attempt. Moments before calling, Hall, who was scheduled to work a shift at a grocery store at the time, had posted a photo to Snapchat of the overpass above Interstate 80 with text that read “who would miss me,” according to a report from the district attorney’s office.

Christian Hall held his HANDS UP in the air for 14 seconds right before @PAStatePolice fatally shot him! He posed NO threat! Join me in demanding an independent investigation into the troopers unjust actions! #JusticeForChristianHall  NBC pic.twitter.com/aHqzA4wGlL

State police reported that one of the troopers watched Hall “bless himself, point to his head and then pull the gun from his waistband and point it in the direction of the troopers.”

Jacob and Crump, who were also the lawyers representing the family of George Floyd, wrote formal complaints to the FBI, U.S. Attorney General Merrick Garland and PA Attorney General Josh Shapiro last month, requesting that they investigate the shooting as well as the response by PA State Police and the district attorney’s office.

In the letters, they accuse the district attorney’s office of falsely implying that Hall threatened troopers with the gun.

“Parents whose children are in the midst of a mental health emergency should be confident that their children will be assisted by law enforcement, not gunned down when they need help the most,” Crump said.