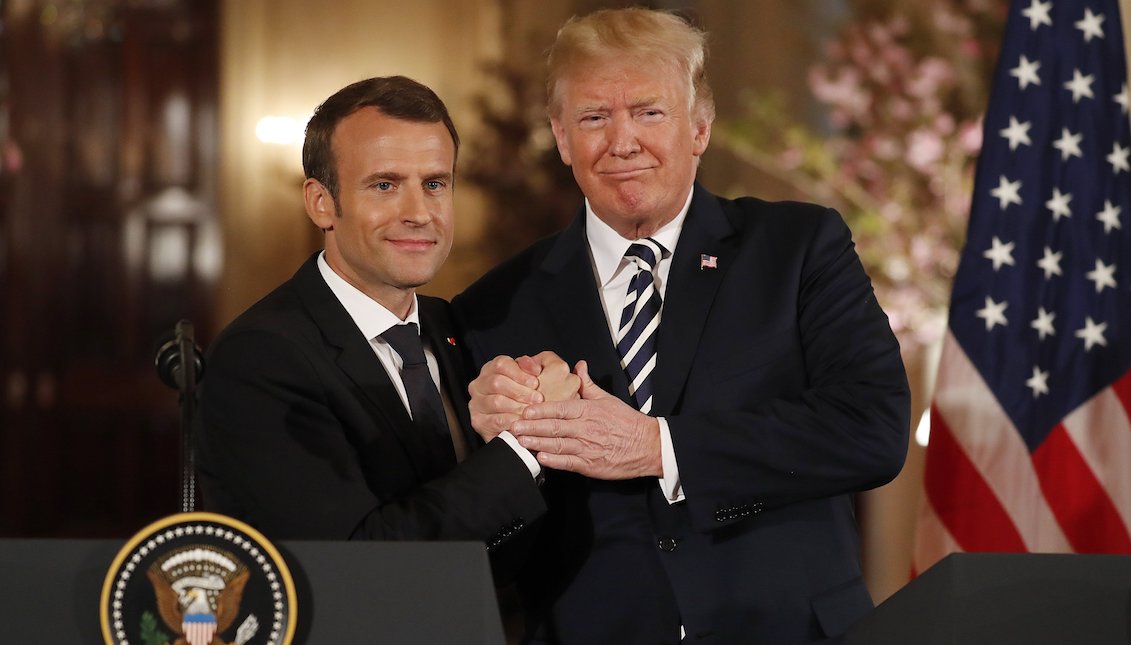 US President Donald Trump (R) and French President Emmanuel Macron (L) offer a press conference after a welcome ceremony at the White House in Washington DC, United States, on April 24, 2018. Macron makes a state visit to the country marked by Iran and…

"There will be no stability in this world unless we restore the meaning to the multilateralism that we have founded and led," said French President Emmanuel Macron, in front of the dozens of French personalities that make up his delegation, upon arriving at the Blair House in Washington DC.

"Our countries can help solve the world's problems," he continued, referring to "a story rooted in one another," according to the French newspaper Ouest France.

The mission of the young French president is not at all simple: he should try to "seduce" the tycoon in the White House so that he remains in international agreements so delicate for the French country's agenda.

Since the inauguration of his government, Macron has tried in every way to become the new European emissary in America, especially after the Brexit in the United Kingdom and the internal problems of the German government of Angela Merkel.

That is why the young governor - the youngest in the post since Napoleon - has sought ways to approach his American counterpart, even when nothing in both profiles seems to resemble.

With a critical situation at home - between a low popularity and measures that have unleashed social revolts similar to those of May 68 - Macron has embarked on a missive beyond the Atlantic.

His goals are not humble: to keep the United States within the agreement with Iran, within the conflict in Syria and within the Paris Climate Agreement.

According to the New York Times, “Mr. Macron has struck an apparent rapport with the mercurial American president, who has taken pride in testing, even alienating, some of the United States’ oldest and truest allies.”

But beyond its "charm", the French president may have nothing more to offer the difficult US president.

The Atlantic suggests that Macron, once known as "the French Obama" has become "the Trump Whisperer”.

"Despite their political differences over the Paris climate accord and the Iran nuclear deal, the two seem to share a mutual respect," the paper explains, as Macron is the "first foreign leader to be hosted by President Donald Trump for a formal visit", after having felt overwhelmed by the signs of respect during his visit to France last year.

What seems to unite both presidents is the perspective of both in their own countries.

Trump continues to be perceived as an inexperienced tycoon who seeks by all sources to satisfy his personal desires beyond measures that could help his own country.

According to recent polls in France, Macron, on the other hand, is perceived by 58% of his citizens as a leader who "doesn’t protect their interests", especially after his economic and migratory reform measures.

It is perhaps because of this that the pomposity with which Washington has received Paris has distinguished itself from other presidential visits, especially when both presidents urgently need protocoled acts that could put their hands back on the helm.