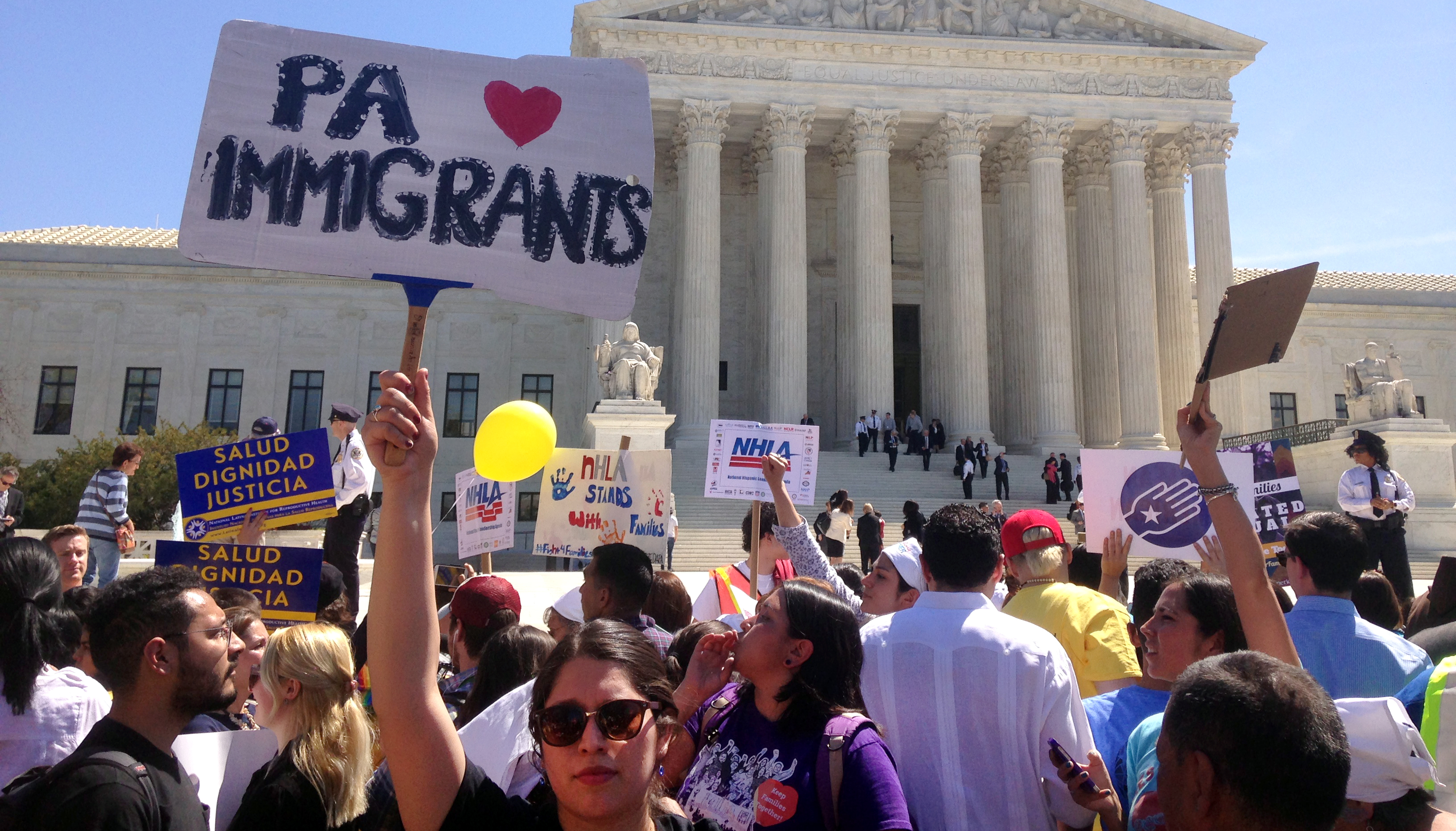 Photo: Nicole Kligerman of the New Sanctuary Movement of Philadelphia

Forty Philly-based immigration activists joined the rally of 2000 outside the Supreme Court on Monday.

Over 2,100 miles from the nation's capital, a Latino empowerment group called Promise Arizona started early with an 18-hour vigil outside the Arizona State Capital building to support President Barack Obama's immigration actions. They camped out ahead of the U.S. Supreme Court's hearings on Monday over the in-limbo reform action known as DAPA, which would provide between 4 and 5 million undocumented immigrants with temporary relief from deportation. Long distance or not, their hope is that the high court will be swayed in favor of the undocumented families.

Meanwhile, those closer to Washington D.C. took their support right to the steps of justice.

A group of 40 Philly-based immigration activists — among them undocumented immigrants — joined a crowd of 2000 outside the Supreme Court on Monday.

In 2014, Texas and 25 other states sued Obama over the executive actions he signed in 2014, arguing that the orders defy federal law. But before getting into the nitty-gritty of the immigration argument, the Supreme Court must first consider whether the states even have legal standing — that is to say, the right to bring the case to court in the first place. And that's what Monday is all about.

The case represents a major logjam in what has been a logjam-filled battle between national Democrats and Republicans over immigration reform. The Supreme Court is expected to decide on the case (The U.S. vs. Texas) by the end of June.

Meanwhile, another order passed under the Obama administration may be at stake.

In 2012, the president issued an executive action that established the Deferred Action for Childhood Arrivals program, or DACA, which has allowed about 700,000 undocumented youth to remain in the country legally. DACA remains in effect and is not being challenged. However, the fate of the DACA program will be left in the hands of the next president. Both of the Republicans running to replace Obama — Sen. Ted Cruz and business mogul-turned-entertainer Donald Trump — promise to end the program if elected.

Members of the New Sanctuary Movement of Philadelphia, the Pennsylvania Immigration and Citizenship Coalition, and the South Philly-based Juntos were among thousands of pro-reform activists at the rally.

“I am here today for my grandchildren, to fight for DAPA and DACA, so that they can go forward," said Sandra, a leader from the New Sanctuary Movement in the massive crowd, who declined to use her last name. "I am so happy to be here — to be part of so many people is a triumph.”

Also at Monday's rally was Sophie Cruz, who you may remember as the 5-year-old girl who gave Pope Francis an immigration-related letter during his Philadelphia visit in September. Cruz addressed the crowd Monday, and was also invited inside the Supreme Court's chambers, according to sources at the rally. Cruz and her sister are U.S. citizens; her parents, however, are undocumented. Under Obama's DAPA plan, Cruz's parents would receive a three-year stay of deportation along with a renewable work permit.