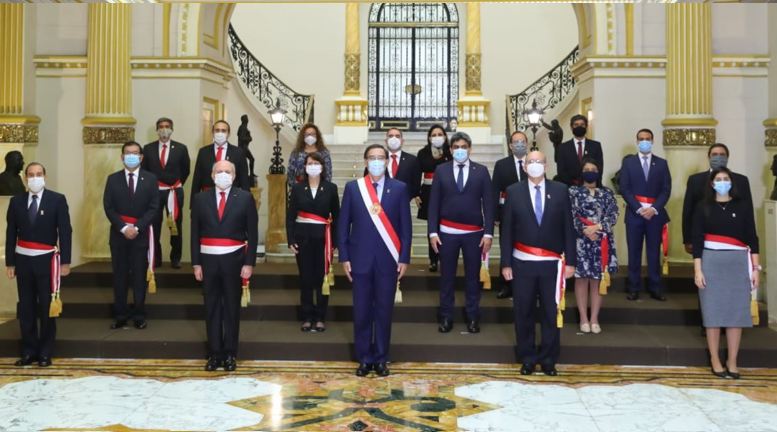 The country’s handling of COVID-19 has led the president to shuffle his cabinet in hopes for new results.

As cases of the novel coronavirus rise, and the poor being disproportionately affected, Peruvian President Martín Vizcarra has been forced to change course.

Both Vizcarra and his government have received criticism for their handling of the pandemic.

In March, the president’s approval rating stood at 87%, but after June it fell 17 points.

According to data from Peru’s National Institute of Statistics and Informatics, in the first six months of 2020, 12.4 %, or 1.6 million people, of the labor force in Lima became unemployed.

The country of only 33 million people has over 337,000 confirmed coronavirus cases. This makes Peru the fifth-worst affected country in the world, ahead of countries with larger populations like Mexico, Italy and South Africa.

The country’s high numbers are surprising because Peru was one of the earliest countries in the Americas to order a lockdown and used their army to enforce it.

One of the reasons for Peru being the fifth-worst affected country in the world is because 40% of the population does not have a refrigerator in their household.

The lack of cool storage forces many people from poor communities, who already do not have access to quality healthcare, to make frequent trips to crowded markets because they can not stock up on food if they have no way to preserve it.

Of the president’s 19 cabinet positions, 11 were replaced and sworn in during a televised ceremony on Wednesday.

The new minister of foreign commerce and tourism, Rocío Barrios Alvarado, had to take her oath from her home in quarantine via video as she tested positive for COVID-19.

Both the incoming and outgoing prime ministers have also had recent controversies in Peruvian politics.

Former minister Vicente Zeballos put himself in a tense situation when he commented on whether members of the congress that Vizcarra dissolved after their refusal to accept his anti-corruption reforms, should be allowed to run for reelection.

“On principle, no. They can't run in January, let alone 2021,” he said before the elections.

This prompted the country’s Special Electoral Jury to launch an investigation against Zeballos for infringing on the norms of neutrality in parliamentary elections.

The investigation closed on November 27, 2019 and the National Jury of Elections ruled that the dissolved congress could run in the January 2020 election.

This coupled with him being the head of the cabinet that led Peru to its high number of COVID-19 cases resulted in him being prime minister for less than a year..

His successor and former defense minister, Pedro Cateriano, has been in politics for 30 years and Vizcarra hopes that he will be a steady hand to guide the ship of his new cabinet.

He has also previously served as the prime minister and right-hand man to former president Ollanta Humala.

The ex-president is awaiting a trial after allegedly illegally receiving money from the former president of Venezuela, Hugo Chavez, and Brazilian construction company Odebretch to fund his presidential campaign in 2011.

While serving as defense minister to Humala, an audio clip was released where the first lady, Nadine Heredia, is telling Cateriano that he has the “green light” to make purchases for the defense sector through the United Nations Development Programme.

Cateriano was accused of being complicit in allowing Herdia to make governmental decisions that she was not supposed to.

Peruvians thought the United Nations was using Cateriano to sell arms to Peru, but the organization dismissed those claims.

A member of the cabinet that kept her position was minister of economy and finance María Antonieta Alva, a rising star in Peruvian politics. The 35-year old is known for dedicating her time in government to reforming economic and educational policy to lessen inequalities in the South American country.

The BBC called Alva’s plans to restimulate the Peruvian economy during the pandemic the “most robust plan in Latin America,” as it is set to be worth 12%  of the country’s GDP or $25 billion.

Vizcarra making ministerial changes now still does not give much time to change the country’s outcomes as this is his last year as head of state.

Peru’s constitution states the presidential term is to last five years. Even though he assumed the presidency in 2018, he did so as the vice president of Pedro Pablo Kuczynski, who resigned following his involvement in the Odebrecht scandal.

Vizcarra only intends to finish the term he inherited and has already signed a resolution stating that general elections will be held next year.

He told the Peruvian people that he does not plan to use the pandemic to extend his time in power.

“Fulfilling my word and commitment to Peru, I call for general elections to choose our next president, vice presidents and congressmen for the period 2021-2026. Let us continue working to strengthen our country's democracy,” the president tweeted on July 8.