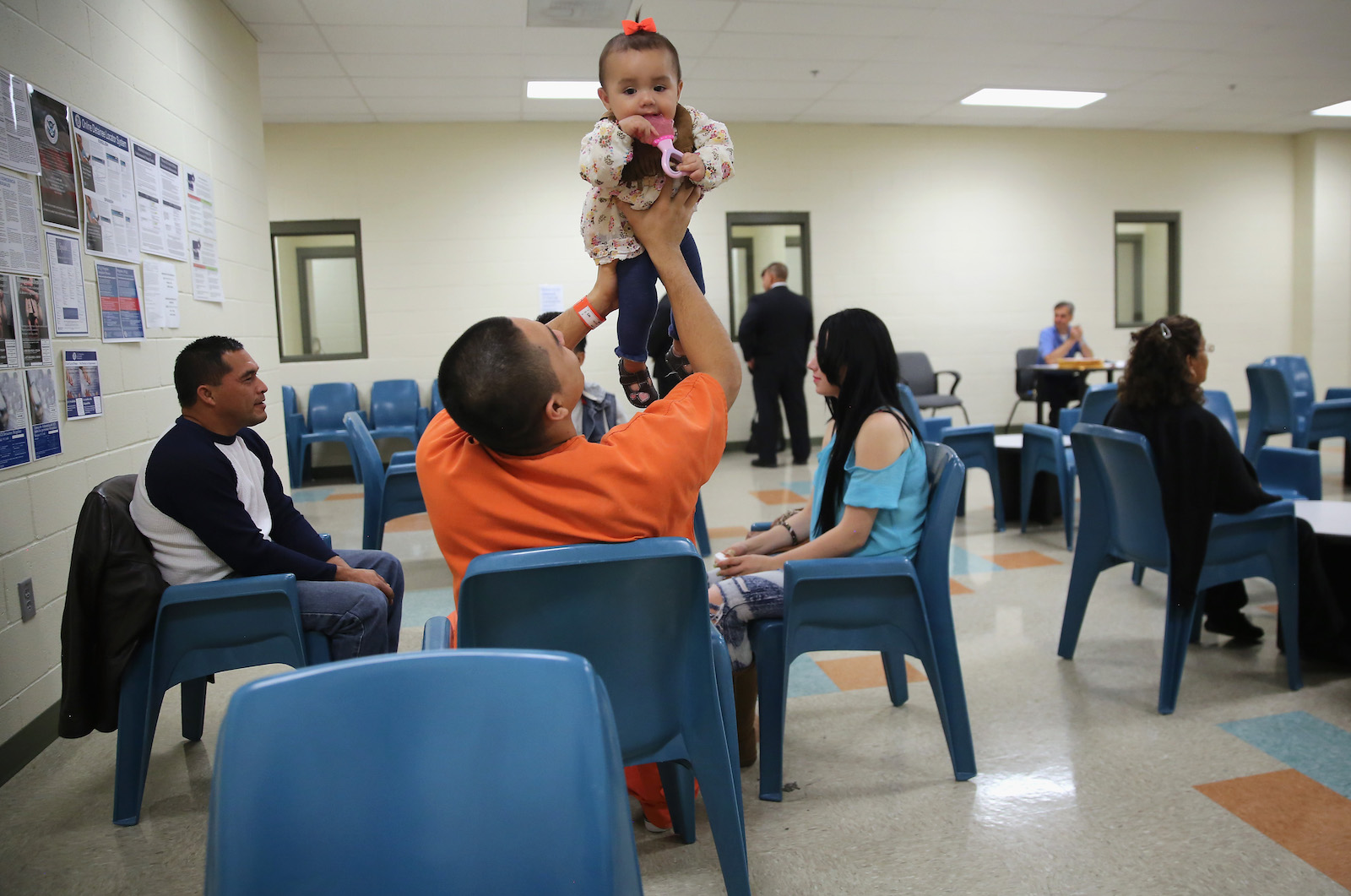 An immigrant detainee holds his daughter during a family visitation visit at the Adelanto Detention Facility on November 15, 2013 in Adelanto, California. The facility, the largest and newest Immigration and Customs Enforcement (ICE), detention center in…

For Latino lawmakers, the fight to end for-profit prisons continues

Torres and Grijalva led 24 lawmakers in sending a letter to AG Merrick Garland, urging him to consider dropping the legal challenge against People not Profit.

Advocates have been calling on President Joe Biden to deliver on the key immigration issue of ending for-profit immigration detention centers ever since the end of his first 100 days.

He has still not delivered.

Over the course of his campaign, he promised to end for-profit immigration facilities and as president, Biden has ordered the Department of Justice (DOJ) to terminate its private contracts with federal prisons.

He did not however expand the directive to include the Department of Homeland Security (DHS).

While he signed an executive order on Jan. 29 to terminate federal private prison contracts — an action that would ultimately put an end to private prisons — the order fell short of being effective and addressing racial inequities.

Detention centers, in how they currently function, are an extension of the mass-incarceration crisis in the U.S., and especially during COVID-19, the health risks were also exposed.

In response to the president’s moot actions, several lawmakers have introduced legislation or advocated for already-present initiatives to end for-profit detention.

In February, Rep. Raúl Grijalva introduced a bill to end for-profit prisons and immgration detention centers. Instead of imprisoning families for seeking asylum, the bill would reinstate family case management programs that are more successful in safely and efficiently guiding families through the asylum process.

It would phase out private prison contracts and order the Justice Department to decline renewing. It would also end contracts with private companies for other criminal justice organizations, including halfway houses, re-entry programs, and community treatment centers.

“The private for-profit prison industry has fueled a mass incarceration crisis that disproportionately impacts immigrants and communities of color. I introduced the #JusticeIsNotForSale Act to ban private prisons and end family immigrant detention,” Grijalva wrote at the time.

Then in April, progressive democrats introduced the Freedom For Families Act, which would ensure that no federal dollars are spent on operations or the construction of family detention families, and would phase out family detention centers within 30 days.

According to the bill summary, it would transfer funds currently used to operate family detention centers to fund community-based non-detention programs like the Family Case Management Program, halted by the Trump administration.

So far, little has happened.

It’s why independent initiatives are spreading across the country, from the Shut Down Berks Coalition, to the most recent demonstrations in Pasadena, California.

There, protestors are demanding that the government close private prisons in the state. Specifically, a private prison operated by immigration authorities that has come under scrutiny for violations allegedly committed against inmates.

It’s part of an ongoing legal battle between state officials and federal immigration authorities over a California law that bans privately-run immigration facilities.

California’s AB 32 is a 2019 law that phases out the use of private prisons and for-profit immigration detention facilities by 2028. A district court upheld the law in October, spurring the federal government under the Trump administration to appeal the decision to the Ninth Circuit.

The legislation would force the shut down of the seven privately-operated immigration detention centers across California, and would affect up to 7,400 people. The GEO Group that operates five of those facilities would lose billions of dollars should the law progress.

Congress has never authorized ICE to outsource detention functions to private prison companies, and it’s this lack of authorization that has come under fire through initiatives like AB 32.

“Profiting off human captivity is immoral & betrays our values as a nation. @RepRaulGrijalva & I led a letter urging AG Garland to drop a Trump-era  @TheJusticeDept challenge against CA's AB32, a bill to ban private prisons.It's time to drop the lawsuit,” Torres wrote on Twitter.

Profiting off human captivity is immoral & betrays our values as a nation. @RepRaulGrijalva & I led a letter urging AG Garland to drop a Trump-era @TheJusticeDept challenge against CA's AB32, a bill to ban private prisons.

It's time to drop the lawsuit.https://t.co/Lm41Lz7WJY

They led 24 lawmakers in sending a letter to AG Garland, urging him to consider dropping the legal challenge against People not Profit.

The lawmakers note that continuing the ongoing appeal puts the Department of Justice in the way of Biden’s stated goal to ensure the federal government does not use private facilities for incarceration.

The lawmakers released the following statements:

“The State of California has every right to cut ties with this abhorrent industry, yet the Trump Administration sued to hamper those efforts. It’s time for Attorney General Garland to withdraw from this suit that betrays our values as a nation and undermines the will of the people in the Golden State,” Torres wrote in a statement.

“I’m proud to lead a letter this week with Congressman Grijalva and my Congressional colleagues urging him to do exactly that, and look forward to a prompt response from the Attorney General,” she continued.

Grijalva, who has been working on initiatives to battle mass incarceration in his home state of Arizona, shared his own words on California’s legal battle.

Both legislators urged Biden to also make good on his promise to move forward with ending mass incarceration.