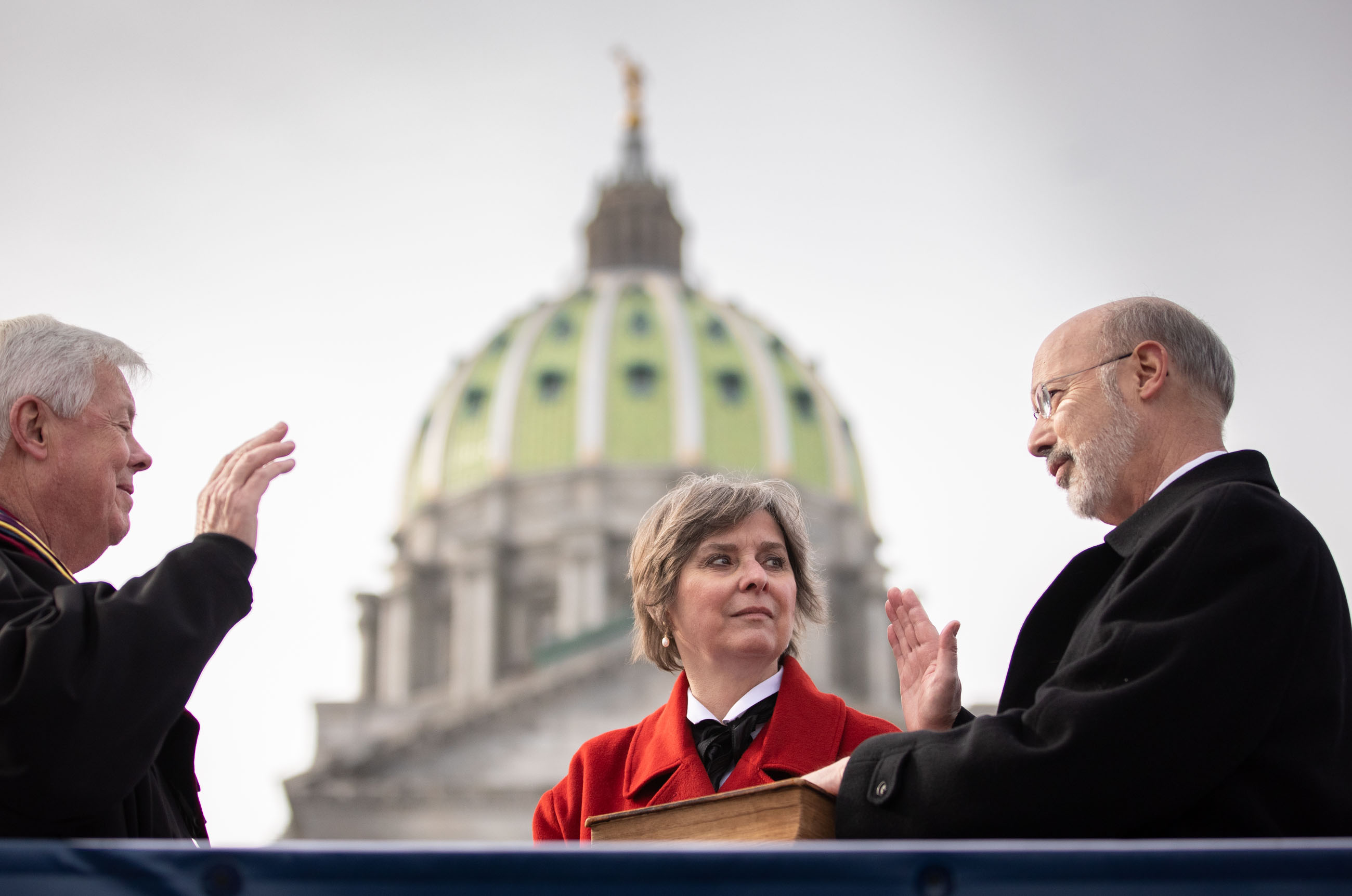 Amid Democratic gains and more women in state Congress, PA looks ahead

Gov. Wolf and Lt. Gov. Fetterman both struck optimistic, forward-looking notes on inauguration day - a stark contrast to the doom and gloom promulgated by the…

Last Tuesday, Jan. 15, Pennsylvania welcomed its governor, Tom Wolf, back for a second term, and inaugurated his new right-hand man, John Fetterman, to his first go-round as Lieutenant Governor.

Democratic leadership remained in Pennsylvania, and the party made gains in both U.S. Congress and the state’s General Assembly.

More women now hold office in the state, healthcare is top of mind for voters, and Pennsylvania’s new second lady is a former Dreamer.

These developments portend the makings of Pennsylvania’s own symbolic “wall,” being built in opposition to the policies and rhetoric at the federal level.

A second term for Governor Wolf

When Wolf and Fetterman spoke on the sunny, frigid mid-January afternoon at the State Capitol in Harrisburg, they both struck optimistic, forward-looking notes - a stark contrast to the doom and gloom promulgated by the Trump administration, and which won him Pennsylvania in the 2016 presidential election.

“My fellow Pennsylvanians, no longer are we stuck at a crossroads. We have chosen a path of progress. We have earned the right to feel not just proud of our past, but hopeful for our future,” Wolf declared toward the end of his speech.

So, what does the “progress” of his first term look like, and what can Pennsylvanians expect over these next four years?

Wolf, expectedly, highlighted what he viewed as his greatest accomplishments from his first four years in office. He cited job creation, the improvement of roads and bridges, increased funding for public schools, the expansion of Medicaid, a lowered prison population and fiscal prudence.

The unemployment rate in Pennsylvania is now at 4.2 percent as of Nov. 2018, down from 5.4 percent in Jan. 2015, when Wolf’s first term began. Over this same time frame, over 100,000 more Pennsylvanians have become employed.

In July 2018, Wolf signed into law the bipartisan “Clean Slate” bill, which expanded the sealing of criminal records, to include more types of misdemeanor offenses. Earlier this month, Wolf announced a “record drop” of 2.2 percent in the state’s prison population in 2018.

In his speech, the governor also addressed the mass shooting at Pittsburgh’s Tree of Life synagogue in October that killed 11 people. He said it was “unquestionably the toughest day [he has] had in this office.”

In its aftermath, however, he was encouraged by the solidarity Pennsylvanians from all walks of life showed.

“We all came together. We all did what we could. We all leaned on each other. We all found the strength to carry on,” he said.

Looking ahead to his second term, Wolf vowed to continue investing in the state’s public schools and its infrastructure.

He cited “the value of an energy policy that protects our environment and creates good jobs,” and his intention to take on the opioid crisis, criminal justice reforms, fairer elections and combating discrimination against the LGBTQ community.

To see this all through, and amid a divided government in Harrisburg, he emphasized the importance of trust, stressing that he would continue to make transparency and ethics a “top priority.”

Notably, Wolf didn’t touch on immigration in his speech. Pennsylvania is home to the controversial Berks family detention center and some of the most aggressive ICE activity in the country.

In Philadelphia, activists have staged protests outside ICE’s district office decrying their presence, and demanding that Wolf shut down Berks, an action he has balked at taking because he contends that the federal government would ultimately continue running the facility - a claim disputed by activists.

Given that his opponent in the 2018 general election, Republican Scott Wagner, staked much of his platform on aligning with President Trump’s fear mongering about caravans of migrants approaching the U.S. southern border, fleeing hostile conditions in their home countries, and amid the current government shutdown over funding for the very same border wall, the absence of any mention of immigration topics in Wolf’s speech was noteworthy, if only as an indicator that, contrary to the hope of many immigrant rights activists, it seems as though, so far, the governor will not be changing his tune on Berks in his second term.

“The tie looks good on you,” Wolf told his new right-hand man during his inauguration address on Tuesday.

A native of York, PA, and the former mayor of the western Pennsylvanian town of Braddock, John Fetterman generated significant buzz during the 2018 campaign thanks to his ability to connect with voters, his regular campaign stops in areas across the state often neglected by politicians, and, yes, his casual fashion style which made his suit-and-tie attire on Tuesday especially noteworthy.

Giving a much shorter speech to welcome the governor, Fetterman outlined some of his own expectations as he steps into office.

“Today we choose not to turn toward fear and cynicism but move toward progress,” Fetterman said.

Fetterman campaigned on a progressive platform as he beat out four other opponents for his party’s nomination for Lieutenant Governor, including the incumbent, Mike Stack. He vowed to focus efforts on addressing income inequality, expanding healthcare and tackling the opioid crisis, as well as championing recreational marijuana efforts.

At his side was his wife, Gisele Fetterman, a community leader and activist who has committed herself to a life of philanthropy.

A former Dreamer who first arrived in the U.S. as an undocumented immigrant from Brazil at the age of eight, state’s new second lady wore a metal pin that read “Immigrant” to the inauguration ceremony.

It’s clear that she, at the very least, will be working to ensure that immigration issues won’t be ignored by Pennsylvania’s leaders.

“I proudly wore an immigrant pin on my chest, as I wear the label daily in my heart and in how I view the world: its suffering and its beauty,” Fetterman told AL DÍA in a statement, adding that the pin was custom-made by Studebaker Metals in Braddock, PA.

Gains for the left, women representatives

In the 2018 midterm elections, Democrats gained four U.S. Congressmen in Pennsylvania, thanks not only to a court-ordered redistricted map, but also to the nationwide pivot away from the Trump administration and the Republican-controlled Congress of the past two years.

The state now has four women in U.S. Congress - all Democrats - where before there were none.

Similar gains were evident on Tuesday at Pennsylvania’s inauguration proceedings, where state senators and representatives were looking on, fresh into their respective terms in office.

While Republicans maintained control of the Pennsylvania General Assembly, Democrats made noticeable gains. In the House, Democrats gained 14 seats and Republicans lost 10. In the Senate, with 25 seats up for election, Democrats chipped away at the Republican majority - whereas Republicans previously held a 33 to 16 majority, this has been narrowed to a 29 to 21 Republican advantage.

Of the 93 Democratic state representatives, 30 are women, a high water mark for the party. Of the 110 House Republicans, 22 are women.

Women now make up 25 percent of the state’s representation.

Healthcare and the 2020 elections

Wolf and Fetterman’s respective remarks about healthcare elicited the most animated applause from those in attendance, suggesting a unified issue for Pennsylvanians that was perhaps the decisive factor in generating the wave of statewide support that landed both men in public office.

Fetterman pledged to pursue healthcare that everyone can access and afford.

Wolf, looking back on his first term, highlighted the fact that the uninsured rate is down, and boasted that in that time, his administration “expanded Medicaid to cover an additional 720,000 Pennsylvanians, and increased enrollment in the CHIP program so it now serves nearly 180,000 children.”

By 2016, two years after the Affordable Care Act went into effect under President Obama, and a year after Wolf chose to expand Medicaid, the uninsured rate in the state shrunk to 6.8 percent, down from 10.2 percent the year he was first elected.

Though President Trump and  Republicans in Congress have been frustrated in their attempts to repeal Obama’s healthcare law, they have so far succeeded in gutting key provisions of the healthcare act, including the individual mandate, the penalty for failing to get health insurance — a development that led to a recent ruling by a federal judge in Texas declaring the legislation unconstitutional — and some protections for pre-existing conditions.

In the 2018 elections, exit polling found that healthcare was the key issue for Pennsylvanians, and Democrats won big.

As the country braces for the 2020 presidential election, healthcare appears likely to remain at the forefront of voters’ minds - and it may be Democrats’ issue to lose in this critical swing state.

Pennsylvania, of course, narrowly voted for President Trump in the 2016 presidential election, one of the three “Rust Belt” states, along with Michigan and Wisconsin, that carried Trump to victory in his unexpected win over Hillary Clinton.

Just two years later, based on the 2018 election results and Trump’s declining popularity amid the longest government shutdown in the country’s history, it appears increasingly likely that Pennsylvania may vote in favor of whoever Trump’s Democratic opponent might be.