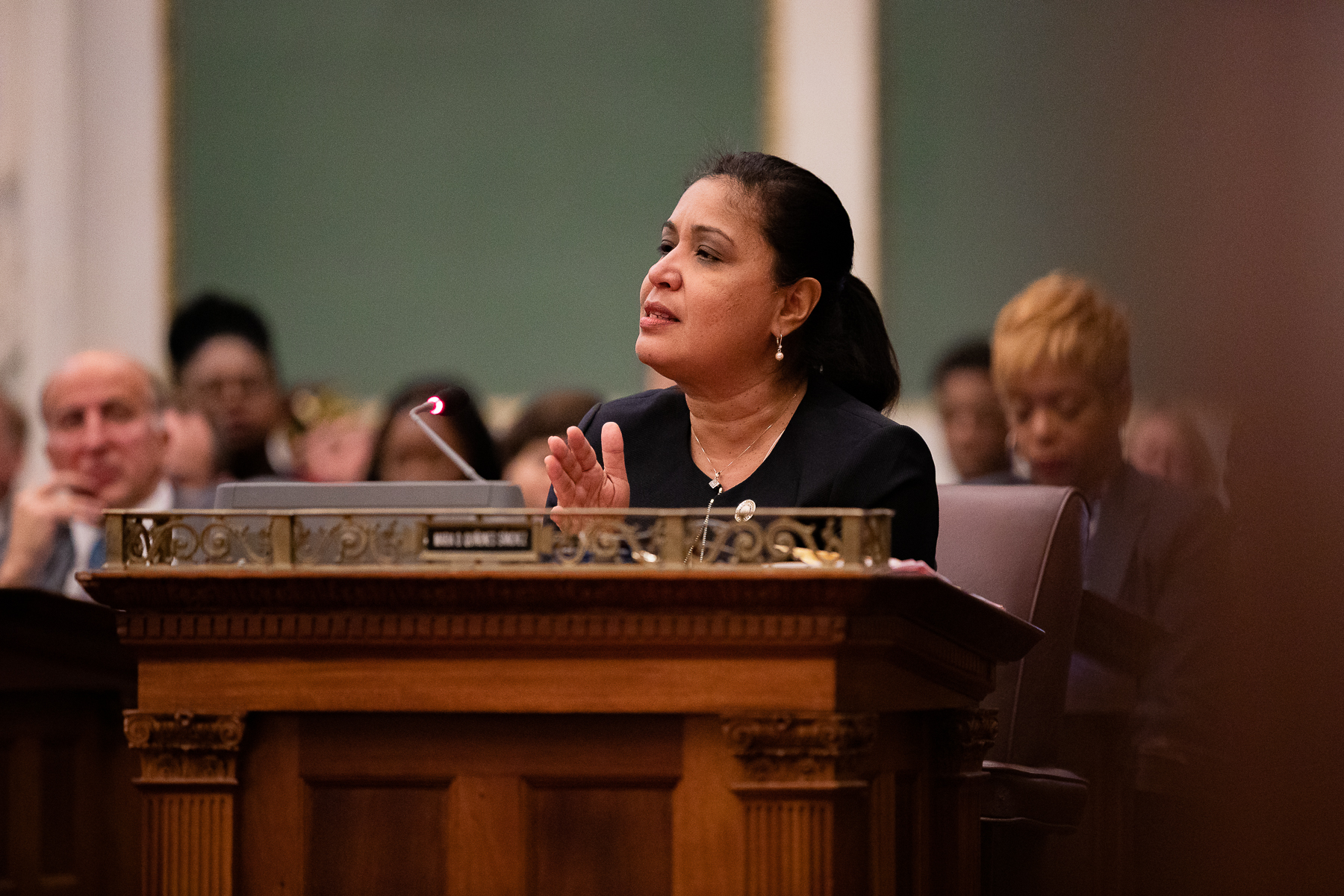 Councilmember María Quiñones-Sánchez came out against just bringing Philadelphia back to 'normal' with its new budget. Photo: Jared Piper/PHL Council

Philadelphia City Council gave preliminary approval to a budget deal late Thursday night after a weeks-long battle on how to best address housing, affordability, homelessness, and affordability in the city. One key aspect of the budget that key players have touted is an investment of over $155 million in violence prevention programs.

That figure includes $68 million in anti-violence initiatives and $70 million in new funding that will go towards education summer programs, job training, trauma care, and funding for groups that have already started these initiatives.

The preliminary approval came after a compromise, in which a smaller version of Mayor Jim Kenney’s proposed wage tax cuts for fiscal year 2022 made it in despite pushback from some officials that didn’t want any cuts, especially since it involved funding for violence prevention programs.

Council added $89 million in spending over the mayor’s original proposal, for a total of $5.27 billion in the next fiscal year.

The compromise helped break an ongoing gridlock that left lawmakers with little time before the July 1 start of the fiscal year to finalize the city budget.

In the end, the City Council voted 16-1 to advance the legislation.

“This budget makes meaningful investments to ensure the long-term safety, health, and well-being of Philadelphia and our residents,” Kenney said in a statement after the vote.

The preliminary budget funds a $400 million program to create affordable housing, preserve neighborhoods, and to create investment into jobs opportunities. It also invests in efforts against houselessness and poverty, continues police reform initiatives, and commits additional funds to revitalize the arts in the aftermath of the pandemic.

Yet council members like Maria Quiñones-Sánchez say the budget falls short of implementing substantial change that is much needed in the city. She voted against all tax-cut measures in the budget.

This is not the first time she was outspoken on what she perceives as the proposed budget’s lackluster initiatives.

In mid-May, she wrote an opinion article for The Philadelphia Inquirer, in which she called Kenney’s budget ‘safe’ and ‘not good enough.’ Within the piece, she outlined poverty reduction, public safety, neighborhood investment, access to government, COVID-19 response, and equity and accountability as her main points of investment.

Let’s be bold! Ordinary is NOT enough! https://t.co/e61aIBUSga

Quiñones-Sánchez, who is chair of the Appropriations Committee, referenced a separate opinion piece by the Inquirer’s editorial board, which noted frustration at this year’s budget process.

Both parties agree that the city had an opportunity for bold change, and it missed the mark.

“Bringing Philly back to normal is bringing us back to continued gun violence, high rates of eviction and overdose death, and mass homelessness. It’s continuing to see our city make few gains in shaking our unwelcome titles of first in poverty and among the last in job growth. Instead of paving a new path forward, in response to an extraordinary year, the city will pass an extremely ordinary budget — and that was never enough,” the editorial board wrote.

In the same statement, Quiñones Sánchez also outlined what an extraordinary budget would look like, stressing that it must go beyond the status quo to play a part of a competitive city, rather than one stuck in the myth of incremental progress.

“We must disrupt the Mayor’s proposed tax cuts and reimagine those tax savings by directing $30 million for neighborhood businesses and $20 million for arts and cultural organizations’, and continued investments in our Poverty Action Plan,” she wrote.

Quiñones Sánchez added that the city must look to models across the nation like Atlanta, to create an attainable timeline by the year 2030.

"As Appropriations Chair, I will ensure this budget process is not ‘one and done’ by accepting nothing less than equity-driven investments,” she said. “We need to plan better and do better.”

Final passage of the budget is scheduled for June 24.