Extensive research has determined that Philadelphia is the city with the most arrests of undocumented citizens without criminal convictions in the country.

Where did the City of Brotherly Love go?

Anyone who visits Philadelphia would be convinced that it is not only a Sanctuary City but also a place that accommodates each and every one.

But an investigation carried out by ProPublica and the Philadelphia Inquirer has shown quite the opposite.

"Nowhere, however, have federal agents more aggressively embraced their newfound freedom than in Pennsylvania, West Virginia, and Delaware," reporters explain.

“In 2017, the Philadelphia office of ICE, with agents fanning out into communities across its three-state region, arrested more undocumented immigrants without criminal convictions than any of the 23 other ICE offices in the country,” the article published on the ProPublica platform explains. “This is especially striking given that Pennsylvania’s undocumented population ranks 16th in the country, with West Virginia’s and Delaware’s far behind that”.

Previously, we had published figures showing that Execution and Removal Operations (EROs) are considerably higher during the Trump Administration than during the previous two periods of the Barack Obama administration.

The reasons are based on a wide range of new strategies, including harassment and the irruptions of ICE agents in non-border territories, with unexpected raids throughout the country.

In Philadelphia, for example, reporters have determined that detentions are carried out in buildings, restaurants and rural roads, increasing by 64% the arrests without criminal convictions.

"Reporters obtained and analyzed unpublished data showing monthly at-large arrests in each of ICE’s 24 regional offices in 2017," the report explains. "The analysis showed a large majority – 64 percent - of the immigrants arrested in Pennsylvania, West Virginia, and Delaware had no criminal convictions. That compares with the minority – 38 percent - in the country as a whole, though the national percentage trended upward over the course of last year." 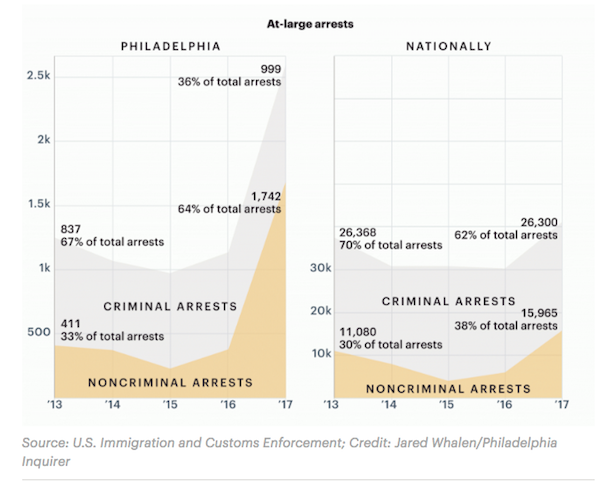 The reporter’s most important findings were the following:

The reporters investigated more than a hundred cases of immigrants married to Americans, pickers, agricultural workers and even disabled citizens, all victims of these new and aggressive measures.

While cities like Los Angeles and New York continued with their operations "under the old rules" after the establishment of Trump's executive order, the ICE office in Philadelphia, on the other hand, "came out swinging.”

As the report continues, the office began the so-called Operation Cross Check “that would take aim at 255 targets, 70 percent of them were ‘criminal aliens,’" according to information obtained by investigators through the Freedom of Information Act.

"By the 12th day, the agents had located only 92 of their intended targets but made up almost all the difference by arresting other immigrants they encountered along the way. In the end, they rounded up 248 people; only 35 percent had a conviction record."