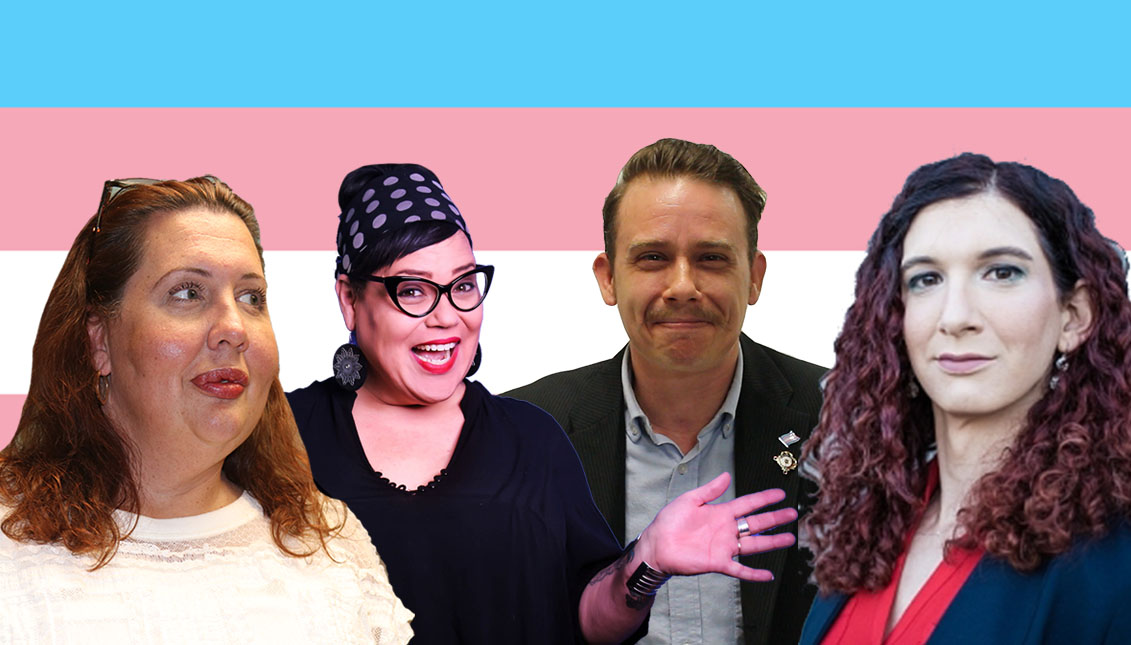 Deja Alvarez, Dinna Nina Martinez, Nick Greene and Brianna Titone were some of the people who opened their lives to AL DIA for the project "The many faces of transgender people."

The many faces of transgender people

In a society that has tried to limit them for so long, transgender people are working to show the world who they are and what they want in life.

Part of the human condition is the fear we experience when faced with the unknown. But what usually puts the un in front of known is lack of awareness.

Transgender people have existed throughout human history, though up until recently the community was not often publicly acknowledged. As the media turns the spotlight on cities like Philadelphia that pass bills to protect the community, or reports on one of the 128 murders of transgender people—86% of whom were people of color—in the last 5 years, the fight of the transgender community, and their resilience, has been brought out of the shadows and into the spotlight.

These days, we see increasingly more accurate depictions of transgender people on the big and small screen. In shows and films like Pose, Euphoria, the Danish Girl and other productions. It is perhaps this greater visibility which has prompted 62% of Americans to say they have become more supportive towards transgender rights.

Yet, in a country where 3% of the population identifies as transgender, since 2017 more than 30 nationwide policies have prohibited or severely impacted transgender people's ability to join the military, enter shelters, use bathrooms and hold jobs, according to The National Center for Transgender Equality.

In July, AL DÍA began reporting on transgender individuals in Philadelphia and throughout the U.S.,  and the project “The many faces of transgender people” was born. Today we bring you the stories of people who open their lives and memories to share with you who they are—inclusive of and beyond their identities as transgender people.

Brianna Titone was born in upstate New York. While most 90s teenagers were going to the arcade or seeing a drive-in movie, 16-year-old Titone “just wanted to do something that [would] help society.” She became a volunteer and then a junior member at her local fire department, where she spent a total of 7 years.

Besides being a nature lover and photography enthusiast, she is a geologist and software developer who once wanted to be part of the FBI but now serves as a member of the Colorado House of Representatives.

She called her victory  “the toughest job interview I’ve ever had,” an achievement that went down in Colorado's history.

“When I was elected, the big story was, “‘Brianna! the first transgender woman to be elected to the state legislature!’ And then that was it... I'm a legislator. I'm one of a hundred people in the State Capitol that are making laws and trying to better the people's lives in Colorado. And I should just be treated the same way as everybody else,” said Titone.

It’s a scenario well known to Deja Lynn Alvarez, who earlier this year saw her name in the press as “the first transgender woman to run for office in Philadelphia and Pennsylvania”.

Alvarez is a  family-oriented, driven Latina woman, who was born in Chicago,  grew up in Delaware, and fell in love with Philadelphia enough to make it her home.

After 20 years of seeing a side of the city that few dare to recognize, she became an advocate, peer counselor and representative of the Philadelphia trans community. She has worked as a system navigator for the City of Philadelphia’s Department of Health and a Commissioner on the Mayor’s Commission of LGBT Affairs, among other positions.

“People think transgender individuals are these deviants. We're not, we want the same things as everyone else. And if people would stop discriminating against us, they would allow us to be able to live our lives just like everyone else,” said Alvarez.

“Sometimes people think transgender people live in some different world than they do. I'm here to say that we do the same things. We play sports, watch movies, TV, we go out, we do things,” she explained. “We are all in this together.”

Love and be loved

If there is one thing that brings us all together, it is love, whether it comes from family, friends or a stranger that is soon to be a partner.

Kettl, for instance, has found the dating scene “difficult.”

“We get judged for how we look. If we are being passable or not, it seems to be one of the huge components of how people in society see you,” she says.

The thing is that despite the progress that has been made,  time and technology have only made finding love and acceptance a trickier conundrum.

“I guess the question I’m really getting to is: do any single men between the ages of 26 and 50 wanna go bowling in Milwaukee this Friday? With me, Not trans Dina, not plus size Dina, not just-a-hook-up Dina, but me. Just me. Dina, Dina,” said the self-proclaimed soccer mom.

At the end of the day, it is part of human nature to want to be loved for who we are.

As some look for an erotic/romantic kind of love. Others, like Coast Guard veteran Nick Greiner, find themselves putting their energy into the love they get from family.

“I'm an uncle! I have got an amazing niece and nephew, and my family is important to me. My mom is unconditional, my biological father also has transitioned. It's nice to see people all comfortable. My sister has been fantastically accepting,” said Greene.

Greene’s experience of family acceptance is unfortunately not the norm, though, for many transgender people.

According to the National Center for Transgender Equality,  57% of transgender people reported experiencing significant family rejection.

For transgender people, the lack of acceptance has led to discrimination, which, in turn, leads to a higher risk of experiencing homelessness, being incarcerated, resorting to survival sex work, and attempting suicide.

But despite the challenges, there is also much resilience. Statistics show that despite “high levels of harassment, bullying and violence in school,” 22% of transgender people were able to obtain an education by returning to school.

Likewise, despite reporting harassment at work, 78% reported “feeling more comfortable at work and their performance improving after transitioning.” It’s this resilience which brings joy for people like Justine Ingram, the transgender coordinator for Fulton County Board of Health in Georgia.

“I can see the light at the end of the tunnel, that it's going to be a lot better for the generations to come, or even for my generation. The future is going to be a lot better and brighter for us because of things that are happening around the country...I see it getting better for all of us. So I always encourage people to be very transparent about who they are,” said Ingram.

AL DÍA  will be publishing the personal stories of all the people who were part of this project here.
TAGS
Log in | Register
00:00 / 00:00
Ads destiny link