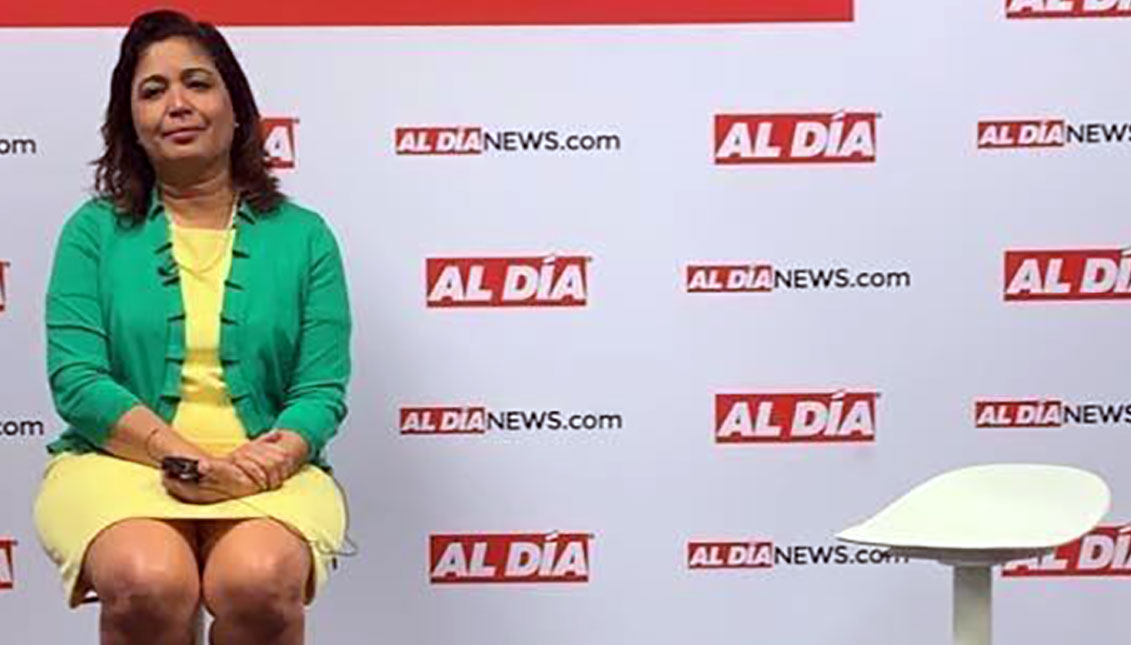 Councilwoman Maria Quiñones-Sánchez at a town hall at the AL DÍA Newsroom on May 3. Photo: AL DÍA News

Public debates among Latino political leaders is a tradition yet to be fully established in Philadelphia, and, as a result, the road to bring the candidates…

No matter how hard we tried, a public debate, in English, and in front of multiple and diverse media in the city, between the two opponents in Councilmanic District 7, Councilwoman Maria Quiñones-Sánchez, and State Representative Angel Cruz, proved to be impossible.

As it is well known, the two are competing head to head in this coming May 21 in the primary election for the right to represent District 7, the “Latino District” of Philadelphia, and, beyond that, for the privilege to represent politically the growing Latino constituency that has repopulated Philadelphia over the past 25 years, becoming today close to 20 percent of the city residents.

AL DÍA had been working for over a month on the media debate project, immediately after this news media organization published individual interviews with each of them, and also predicted, back in November, that the race between the two leaders would happen, before the newspaper of record in the city, the Philadelphia Inquirer, finally published the news, for the first time, in January of this year.

Both candidates made cover stories in AL DÍA, the first in November of last year, when Rep. Cruz spoke about his 20-year record at the State House, and the second back in March, when Councilwoman Quiñones-Sánchez spoke at length of his multiple challenges mounted against her, ever since she got elected as the first Latina to hold a district councilmanic seat in Philadelphia City Council in 2007.

The headline on the cover read:  “I picked my enemies,” openly referring to the local Democratic Party leaders that have not endorsed her and, on the contrary, have tried to stop her in each of her re-election attempts, as recently documented by articles in both  WHYY and the Philadelphia Inquirer.

Rep. Cruz’s challenge is seen as an all-out attempt to dislodge the entrenched independent Democrat who has survived three elections without the support of her own party.

It is widely believed that an eventual victory #4 by Councilwoman Quiñones-Sánchez this coming week would firm up her current influence in City Council, where she is the chair of the powerful Appropriations Committee, to possibly launch a run for mayor of Philadelphia in four years, widely spoken about in local Latino circles.

But that might be an opportunity Rep. Cruz might want to pursue himself, whether or not he wins the vote count when the tally finishes late in the evening of this coming May 21.

The Debate that never happened

All these unanswered topics were part of the questionnaire prepared for the debate by Dann Cuellar, from ABC News, and Lee Nentwig, from AL DÍA News.

WURD was going to broadcast the debate live, and AL DÍA planned a livestream via Facebook. The Philadelphia Inquirer was going to send their political reporter to witness the exchange.

The expectations were high.

During the course of the individual interview with Councilwoman Quiñonez-Sánchez, the idea of doing a debate between the two came up, with the councilwoman accepting immediately during the recorded conversation with AL DÍA.

Rep. Cruz was contacted the same week via his cell phone, and he verbally accepted the public debate idea for April 30, pending confirmation of the hour. The debate was finally postponed for May 3, when only one candidate (Maria Quiñones-Sánchez) showed up. It then became just a Town Hall conversation between her and the audience who registered to attend.

Public debates among Latino political leaders is a tradition yet to be fully established in Philadelphia, and, as a result, the road to bring the candidates together for a civil dialogue has never been easy, although AL DÍA has been pioneering the idea over the past 4 years.

AL DÍA hosted the first debate among Latino candidates four years ago when this journalists-owned and operated media company was able to gather in one room a handful of Latino candidates running at the time for open seats in the Pennsylvania State House and Pennsylvania State Senate. The debate, co-hosted by AL DÍA News with ABC News, took place on May 8, 2014, at the Nueva Esperanza building in North Philadelphia.

The idea of doing a debate for District 7, where much more is at stake in the battle for political power in Philadelphia, was a natural one to do.

But it never happened, in the open and in plain English, so the entire city would get to know.