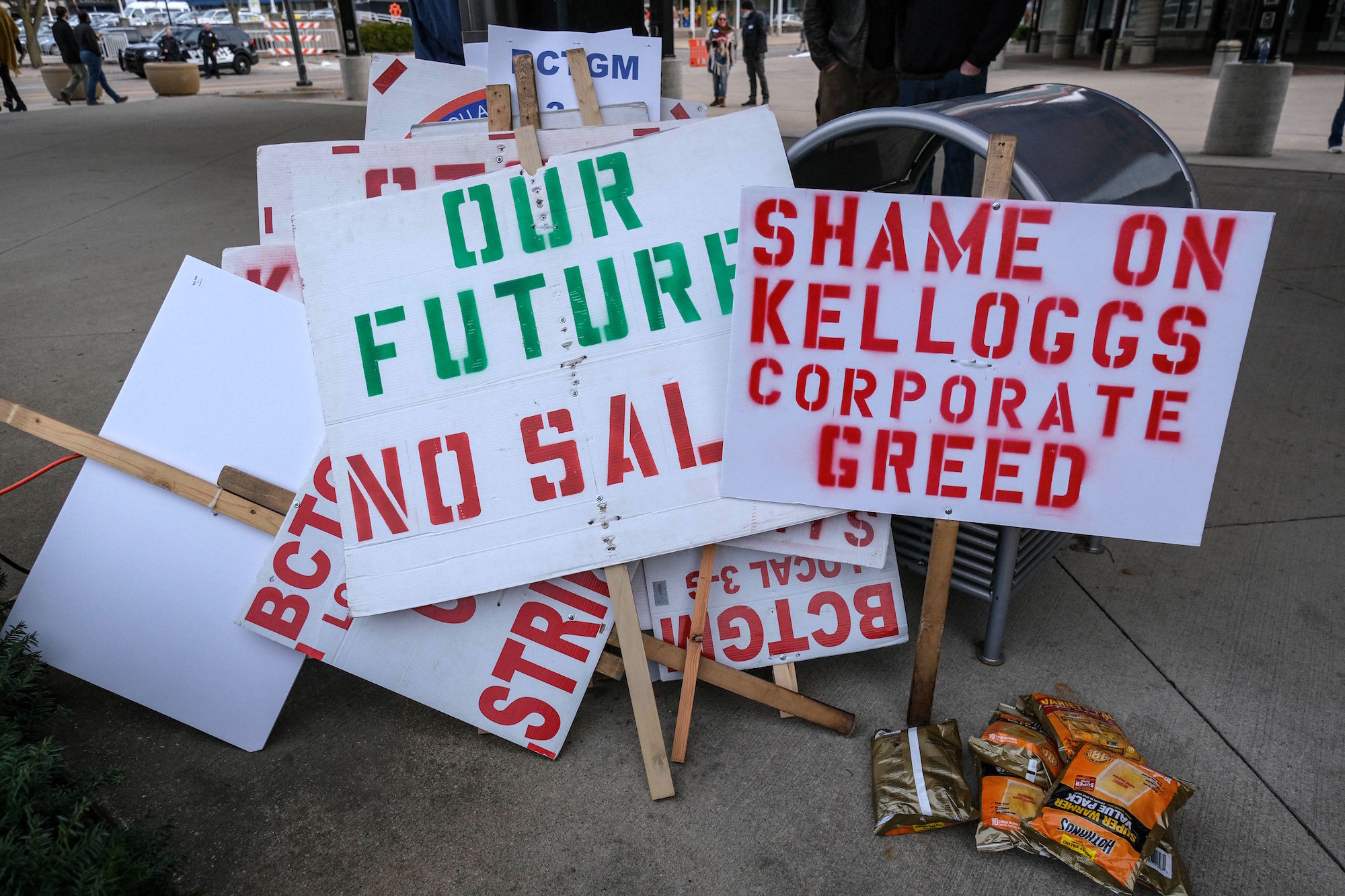 Kellogg’s workers end strike, approve new contract after two and a half months

A second agreed-upon contract was voted on by workers on Sunday, Dec. 19. Unlike the first tentative agreement, this one was approved.

After 77 days on the picket line, Kellogg's workers are ending their strike. Unionized Kellogg’s workers in four states —Michigan, Nebraska, Pennsylvania and Tennessee — have approved a new five-year contract, ending one of the longest-running strikes of 2021.

About 1,400 striking Kellogg workers have ratified a new contract, their union said Tuesday, ending a strike that began in early October and affected four of the company’s U.S. cereal plants. https://t.co/Z6UQaZTC3q

“Our striking members at Kellogg’s ready-to-eat cereal production facilities courageously stood their ground and sacrificed so much in order to achieve a fair contract. This agreement makes gains and does not include any concessions,” union president Anthony Shelton said in a statement.

The agreement comes after workers voted down a prior tentative agreement, and Kellogg’s claimed that it had “no choice” but to seek permanent replacements for the 1,400 workers out on strike.

Days later, the White House put out a statement criticizing the company for bringing “threats and intimidation” against its unionized workers.

“Permanently replacing striking workers is an existential attack on the union and its members’ jobs and livelihoods,” Biden wrote.

Senator Bernie Sanders also stepped in to condemn the move, and attended a rally in Battle Creek, Michigan on Friday, Dec. 17.

“During the early parts of the pandemic these people were considered to be heroes and heroines, which in fact they are. But now, according to Kellogg’s, they are simply disposable workers. To just replace them is extraordinarily ugly,” Sanders said in an interview with The Washington Post.

“Given the extraordinary commitment displayed by Kellogg’s employees over the past two years, the successes they have helped Kellogg’s to achieve, and the inflationary pressures they’re facing, I urge you to return to the bargaining table,” Ricketts wrote.

The Kellogg’s strike is over—and the 1,400 workers who held the line for 10 weeks won! A few new contract highlights:
- No concessions (!) ⁰- No permanent two-tier system⁰- A clear path to regular full-time employment
⁰Strikes work! https://t.co/9Ixr8nCOUK

The new five-year contract includes across-the-board wage increases and cost-of-living adjustments in year one, according to a company statement. It also expands healthcare and retirement benefits.

The new CBA will “graduate” lower-tier employees — called "transitional" employees — with four years of experience into the legacy program.

According to Dan Osborn, president of the local union branch in Omaha, Nebraska, 14 workers will graduate to that higher rate of pay upon this new agreement.

Cost of living increases will kick in for all employees. Transitional employees will now get paid $24.11 an hour, up from $19.92.

The Kellogg’s walkout was among the longest in a wave of strikes that impacted dozens of companies this year. The BCTG International Union has been a force in several large strikes, including the 19-day strike among Frito-Lay workers in Kansas that ended in a contract guaranteeing one day off per week,  and the weeks-long strike at Nabisco that concluded in late September.

"What we did was, we stood up for what we believed was right. We stood the line and we made the sacrifice to fight the giant that is Kelloggs. We're better for it,” Osborn said.