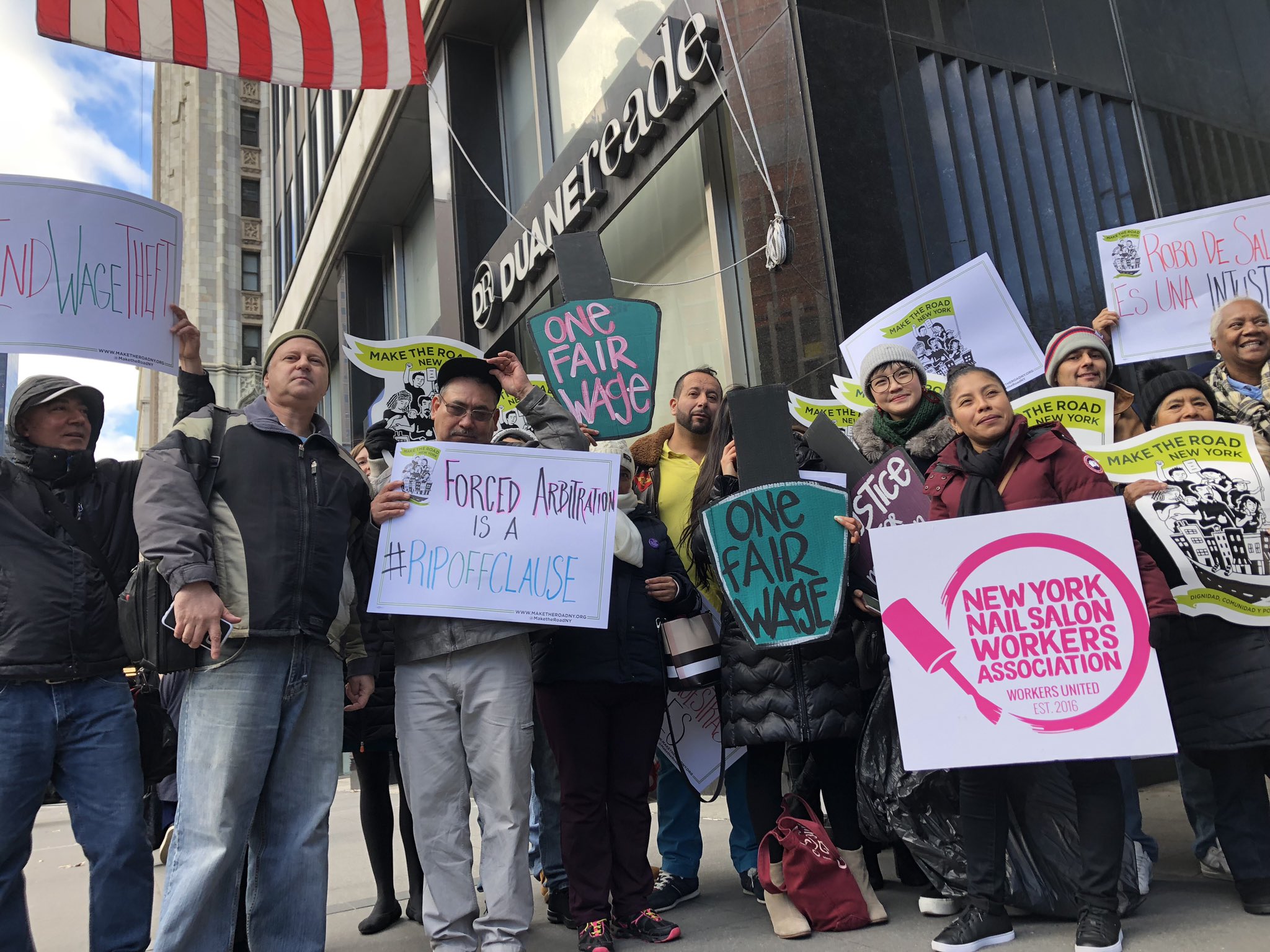 Biden’s first real test as president will be how he tackles immigration reform. Photo: Make The Road NY

The U.S. immigration system was broken long before Trump took office, and leaders are calling on Biden for reform starting on day one.

Immigration reform is coming, but it is to be seen how soon it will come, and how “sweeping” it will really be.

This week, immigration has made multiple headlines.

Lawmakers and activists are anxious to see Biden erase the Trump Administration’s immigration agenda, from its zero-tolerance policy to Muslim bans.

But have also stressed that to merely return to Obama-era policies is also a failure.

The Obama administration deported a record number of immigrants during his first term in office and failed to meet the immigration reform standards pushed at the time, despite having Democratic control of the House and Senate during his first two years.

Less than a week before President-elect Joe Biden’s inauguration, he is facing mounting pressure from immigrants rights groups and legislators who have been pushing immigration reform for years, to deliver on the various promises made over the campaign trail — some said to take place on day one.

The promises
One was sending a bill to Congress to arrange a bipartisan and permanent solution for Deferred Action for Childhood Arrivals (DACA) recipients.

Biden also promised to overhaul the asylum-seeking process, and increase the refugee admissions cap to 125,000, from Trump’s decrease to 15,000.

He also promised to review Temporary Protected Status for individuals who cannot find safety in their countries, ridden by violence or disaster.

It may sound like a lot at first glance, but immigrants rights groups are worried he will stick with the minimum and merely adopt practices that aren’t overt humanitarian threats.

Backtracking...
Some are voicing concern that Biden is already distancing himself from past promises because of recent warnings stemming from a Department of Homeland Security's Office of Inspector General report that detailed authorities in the U.S. turning away asylum-seekers at official border crossings, telling the migrants they didn't have space to process them, regardless of whether they actually could.

“Probably the next six months,” Biden told reporters this week, warning that changing Trump’s policies too quickly is “the last thing we need” because it might lead to having “2 million people on our border.”

This is just one case of a slight revert on Biden’s part regarding Trump-era immigration law that has halted asylum and left thousands of migrants stranded outside of the U.S.

Whether it was the turning point for what came later this week or not, the topic of immigration has made multiple headlines, all calling attention to Biden’s first 100 days, and if he will make good on the rest of his proposals.

They’re issues that are hurting the immigrant community even now, and at heightened levels during a pandemic that has disrupted the lives of migrants and mixed-status families more than others.

A pathway to citizenship for migrant workers
It’s an issue that former CHC chair, Rep. Joaquin Castro (D-TX) has been drawing attention to for months.

On Jan 15, Castro was joined by Senate-designate Alex Padilla (D-CA) in a press call for undocumented immigrants who risk their lives as essential workers to be fast-tracked for citizenship.

There is currently no such path.

“Fixing our immigration system is personal to me,” said Padilla, who added that no state in America is more at stake than California, currently the hardest-hit state in the nation, and has a booming agricultural economy fueled by immigrant workers.

Castro made an announcement during the call, where he announced he was currently working on a bill to immediately protect essential workers and their families from deportation, with a comprehensive plan for a fast track to citizenship.

Now that both the House and Senate are under Democratic control, there will be greater mobility for a bill such as this. Castro also called on the Biden administration to work together in order to deliver on immigration.

“The Biden Administration and Congress must work together to guarantee that undocumented essential workers and their families are included in our nation's economic recovery. These people deliver for us — now, we should deliver for them,” Castro wrote in a Tweet to formally announce his incoming bill.

Essential workers, many of whom are undocumented immigrants, are American heroes—risking their lives during COVID to serve our nation.

I’m working on a bill to immediately protect essential workers and their families from deportation and provide them a fast-track to citizenship.

Trump’s zero-tolerance policy also made waves on Jan 14, with various lawmakers condemning its implementation after former Deputy Attorney General Rod Rosenstein said it “never should have been proposed or implemented.”

It marks another promise Biden made on the campaign trail, over which he admonished the brutal policy multiple times for its tactics involving family separation at the border.  Biden said he would form a task force dedicated to finding the hundreds of parents who have not been reunited with their children, however, he did not divulge details into how — or if — his administration would bring back parents who have been deported.

It’s something advocates say needs to be done, especially since the policy should never have been implemented.

“The State sponsored, inhumane, intentional, and cruel policy of causing terror and hurting children as a form of punishment and deterrence for asylum-seeking migrants is a crime against humanity, and is counter to all international humanitarian principles,” he wrote on Twitter.

A civic and grassroots effort

The Hispanic Caucus (CHC) also recently addressed the president-elect, appreciating his promise to act on immigration reform on the first day of administration, signaling that they are ready to work with him to build a fair and inclusive system for immigrants.

“Our immigration system was broken before President Trump took office, but his administration advanced charges that eroded what was left of our system,” Rep. Raul Ruiz wrote in a letter backed by 110 members of Congress.

“These changes resulted in family separations, inhumane detention conditions that took the lives of migrant children, and discrimination against immigrants based on race, nationality, and income. In addition, the Trump Administration’s push to end protections for Dreamers and cut legal immigration was widely opposed by the American people,” the letter continued.

We are ready to a build a fair and inclusive immigration system.

The @HispanicCaucus and more than 110 Members of Congress are committed to working together with President-elect Biden to ensure immigration reform is signed into law. #BuildBackBetter ⁰
Read letter here  pic.twitter.com/19Yhlhc1gP

The CHC is joined by various immigrants rights leaders nationwide, who are leading the grassroots push for reform.

It’s one of the latest moves from immigration advocates as the days between now and Biden’s inauguration dwindle.

The short video highlights powerful instances of immigrants and immigrant allies protesting over the past four years of Trump’s presidency and calling attention to the top issues they want Biden to address.

The video also calls for an investigation into the DHS, which implemented the bulk of Trump’s harmful policies.

“We urge President-elect @JoeBiden to not just reverse Trump’s heinous policies, but also issue a blanket moratorium on immigration enforcement, & an immediate investigation into DHS,” wrote Make the Road NY on Twitter.

Mijente added that it expects the Biden administration to use both his executive powers and the new Congressional majority to defend the rights of immigrants and allow them to live dignified lives.

With the pressure mounting, it’s become increasingly clear that the transfer of power is the least of Biden’s concerns. From day one he’ll need to answer his promise on immigration.