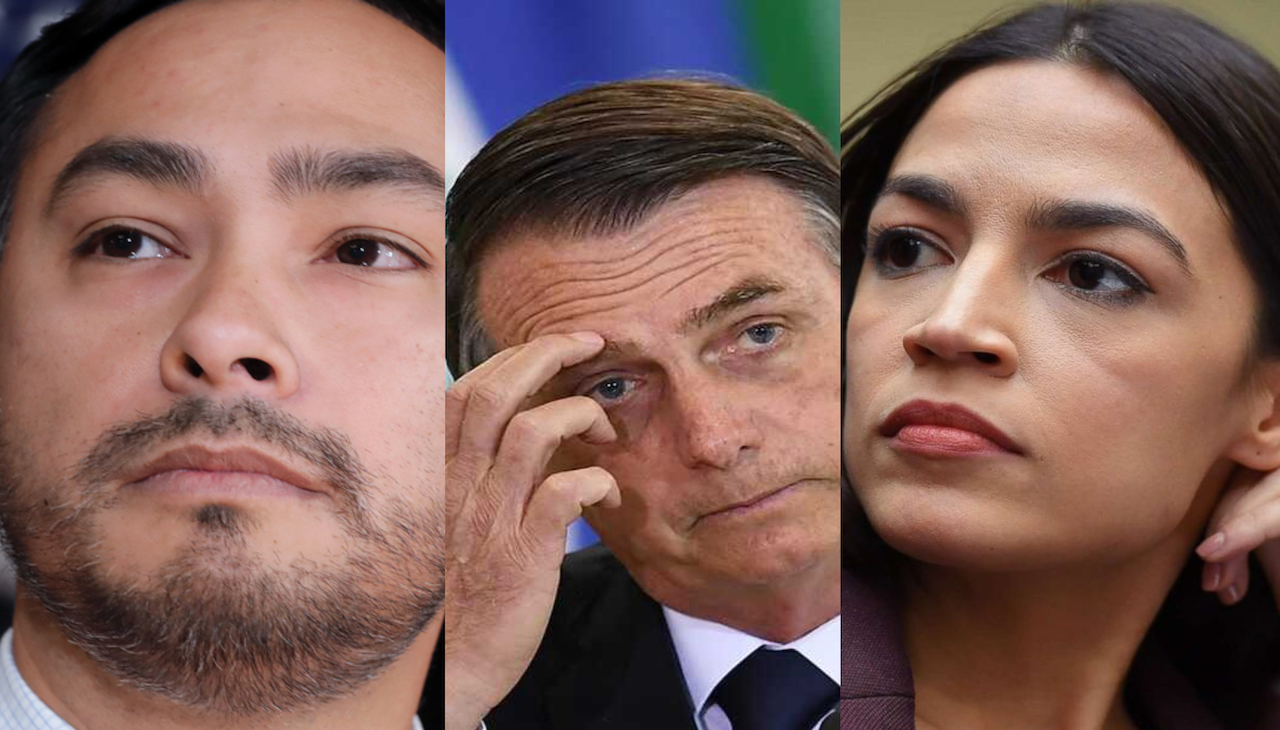 AOC, Joaquin Castro lead charge in calling on Biden to kick Bolsonaro out of Florida

The former Brazilian president has been in the Sunshine State since Dec. 30, 2022.

When Brazilian President Luiz Inácio Lula da Silva was sworn into office on New Year’s Day, 2023, his right-wing opponent, Jair Bolsonaro, was nowhere to be found.

It’s tradition for the outgoing president, no matter how contentious the election cycle, to be present to adorn the new leader of the country with the ceremonial sash, but Bolsonaro bucked the entire event.

Instead, the former president fled the country to the U.S. state of Florida, where he stayed at the house of Brazilian MMA fighter Jose Aldo. A photo on the day of the inauguration was posted to Twitter showing Bolsonaro chowing down on some KFC as Lula assumed power. In the week since inauguration, more photos would appear on social media of the right-wing leader taking part in mundane tasks on his U.S. vacation, which he said would last at least a month.

But if it’s up to Reps. Alexandria Ocasio-Cortez, Joaquin Castro and a number of other Democratic leaders, that stay shouldn’t last another day.

The strong statements from the U.S. Democratic leaders came seven days after Lula’s inauguration, on Jan. 8, 2023. That day, Brazil had its own version of the Jan. 6, 2021 Capitol Insurrection, as supporters of Bolsonaro stormed the country’s Congress in Brasilia and proceeded to destroy whatever they came across within its halls. At the end of the madness, over 400 were arrested in Brazil’s capital.

“Nearly two years to the day the U.S. Capitol was attacked by fascists, we see fascist movements abroad attempt to do the same in Brazil,” wrote Ocasio-Cortez in a tweet reacting to the scenes in Brasilia. “The U.S. must cease granting refuge to Bolsonaro in Florida.”

At the core of the unrest in Brasilia was also what was found at the core of the events in Washington D.C. on Jan. 6, 2021. Just like former U.S. President Donald Trump, Bolsonaro also did not accept the results of his contest against Lula. He also began sowing distrust with the country’s election systems before the race even took place.

The result? An eerily similar scene in Brasilia of election deniers and fervent supporters of the right-wing leader resorting to violence in the event of a lost election.

Rep. Joaquin Castro pointed out the similarities in approaches between Trump and Bolsonaro during an appearance on CNN on the night of Jan. 8. He said Bolsonaro “used the Trump playbook to inspire domestic terrorists,” before demanding the same action from Biden as Ocasio-Cortez.

“Bolsonaro should not be in Florida,” said Castro. “The United States should not be a refuge for this authoritarian who has inspired domestic terrorism in Brazil. He should be sent back to Brazil.”

Waiting for the former Brazilian president back in Brazil could be a number of things that are not a great look. For one, Bolsonaro faces at least five criminal probes upon his return. Four were opened by Supreme Court Justice Alexandre de Moraes before Bolsonaro even left office and the fifth, surely to be ramped up after the events of Jan. 8, involve violent protests that occurred in the name of denying the 2022 election results.

Bolsonaro is thought to be waiting it out in Florida to see how the new administration proceeds with the probes, but Jan. 8 might’ve been the final straw for the former president. Outside of the presidential office, he has no immunity.