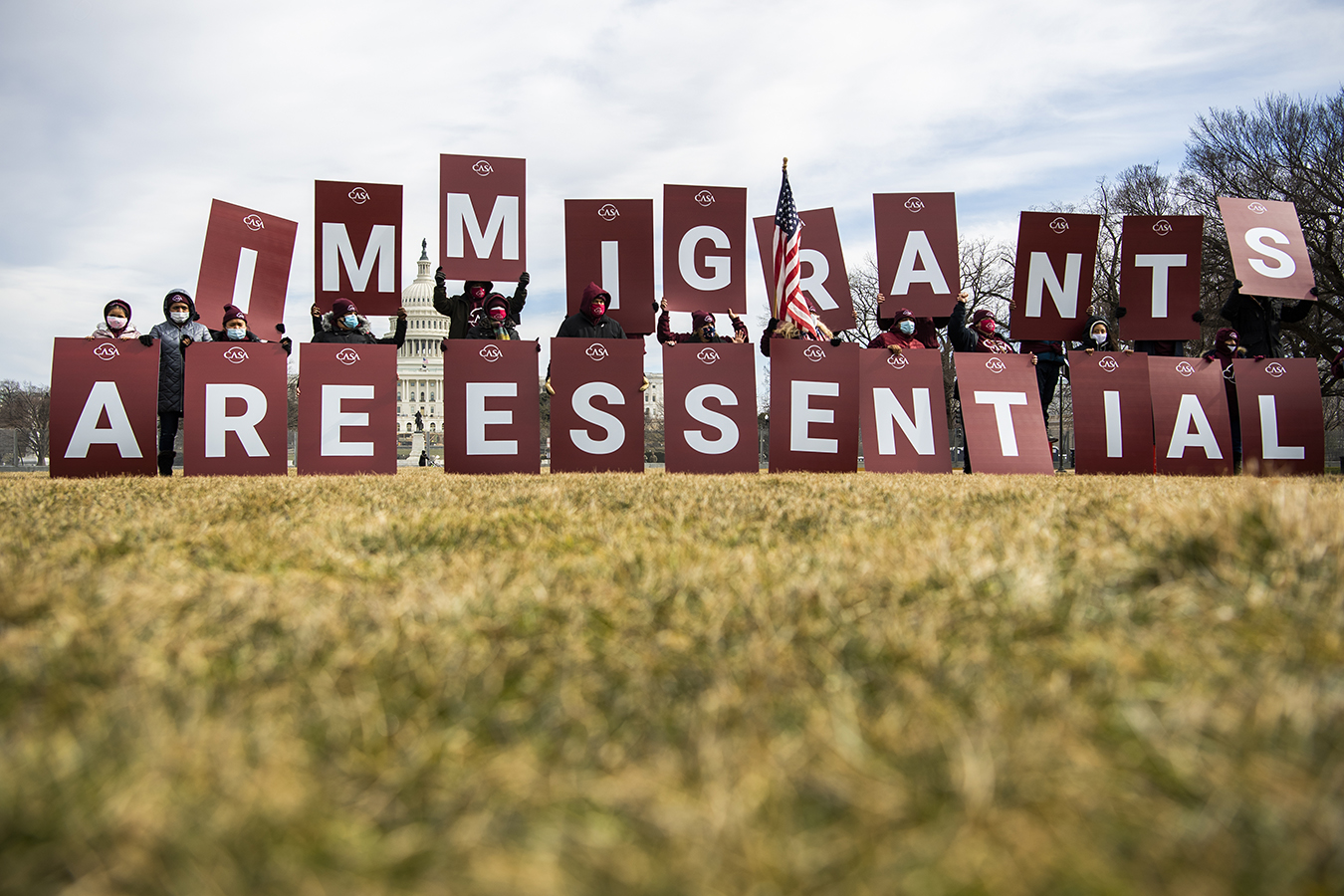 A new report puts immigrants at the center of the U.S. economic recovery from COVID-19. Photo: Tom Williams/CQ Roll-Call/Getty Images

A new report released by the Hispanic Caucus, Joint Economic Committee Democrats and the Center for Migrant Studies confirms what was already known about…

Biden and Yellen also reassured Latino business owners that financial assistance is on the way, partly through the passage of the American Rescue Plan.

Using history as a model, Yellen indicated she holds a large amount of faith and confidence that by the end of next year, the nation will find itself once again thriving at full employment, and that Hispanic-owned businesses will continue to “drive a large portion” of the country’s economic recovery.

If history is any guide, Hispanic-owned businesses will drive a large portion of the recovery. From 2007-12, the number of Latino-owned businesses grew by 3.3%.
It doesn’t sound like much until you see that Non-Latino owned businesses declined by 3.6% during the same period.

She also spotlighted a significant event in the nation’s economic past — the period directly after the Great Recession, from 2007 to 2012, where the number of Latino businesses increased by 3.3%.

During the same time period, non-Latino businesses actually decreased by 3.6%, and then following 2012, Latino businesses sustained this growth, moving forward at more than twice the national average.

As the U.S. slowly but surely adapted to the unique challenges presented by the global coronavirus pandemic, it became abundantly clear that the members of society who keep our country running during ordinary times, have and always will be, “essential workers.”

Who are the essential workers?

When the pandemic reached the U.S. in early 2020, and a large part of the economy had no choice but to shut down, the Department of Homeland Security took steps to label certain workers as “essential,” so that their jobs would be protected; excluding them from local and state stay-at-home orders.

Pandemic or not, our country needs food workers, healthcare providers, childcare professionals, grocery store clerks, warehouse workers of all types, and so many more.

Immigrants make up a disproportionate amount of the employees working these jobs that were considered vital during a worldwide health crisis. While many Americans had the luxury to work from home and focus on what show to binge watch on Netflix, a large majority of immigrants had no choice but to put their health at risk to sustain their families and keep the country running.

The Center for Migration Studies (CMS), the Joint Economic Committee Democrats (JECD) and the Congressional Hispanic Caucus recently released a study revealing that about three-fourths of undocumented immigrants in the labor force are classified as essential workers.

Immigrants are vital to the US economy. According to a @CMSnewyork study, about three-fourths of undocumented immigrants in the labor force are classified as essential.

While in the beginning it was evident that immigrants were more adversely impacted by the economic recession brought on by the pandemic, they are now poised to play a crucial role in the recovery, just as U.S. Treasury Secretary Janet Yellen predicted last month.

The recent report argues that between their spending power, relative youth, high levels of engagement in the fields of science and technology, and high rates of entrepreneurship, immigrants are indispensable contributors to the U.S.’s economic health.

In the United States, immigrants make up about one out of every seven residents, one in every six workers, and are responsible for the creation of about one in every four new businesses.

As of last year, there were 19.8 million foreign-born “essential” workers, working jobs across all sectors and skill-levels. There are more immigrants (69%) and undocumented immigrants (74%) working in these fields than native-born workers (65%.)

As a result, immigrant essential workers have become more likely to contract and die from COVID-19 than native-born Americans.

Immigrants are vital to our economy. They disproportionally serve in frontline jobs that have put food on our tables & kept us safe during #COVID19. In CA alone, immigrants account for 69% of agricultural workers!

Despite the dire health risks of the pandemic as well as the persistent low pay, these foreign-born workers who indirectly put food on our tables, showed up to work during this global crisis out of pure necessity.

Meanwhile, even as fears grew surrounding food shortages and rotting produce, few policies were enacted to improve the working conditions for those contributing to the food industry, and many of these migrant workers — even those with H-2A visas — have little leverage to seek improved working or even living conditions.

For the vast majority of immigrant essential workers, there were only two choices: work in generally unsafe and unsatisfactory conditions, or face the consequences of losing their job or being deported back to their home country.

Why are immigrant workers so vital to our economy?

The report published by the CMS, the JECD and the Hispanic Caucus, laid out several reasons as to why migrant essential workers are expected to play a powerful role in the financial restoration that the country so desperately needs.

The recent study also mentioned this event, writing that even though migrant born workers were hit hard during these years — losing over a million jobs — they were still able to return to pre-recession levels relative to native-born workers.

A 2010 analysis by the Pew Research Center found that immigrants accounted for all of the job gains in the first year of recovery after the Great Recession. Immigrants gained 656,000 jobs and 566,000 entered the labor force.

In comparison, native-born American workers lost 1.2 million jobs and 633,000 exited the labor force. Similarly, according to the CMS report, during the ongoing recovery from the coronavirus recession, employment rates for migrant workers have already begun to swiftly bounce back.

Immigrants are essential workers and part of the backbone of the American economy.@JECDems / @HispanicCaucus report demonstrates why citizenship for essential workers is vital to our economic recovery. #ImmigrantsAreEssential https://t.co/j7bRf1CQqc pic.twitter.com/xs832wqPBL

The report also highlights more relevant reasons for why immigrant essential workers will majorly contribute to the rehabilitation of our economy.

Already, the gap between the employment-population ratios between foreign-born and native-born populations is expanding, with foreign-born workers returning to the workforce at a faster rate.

While the report recognized that this may be partly due to limited access to unemployment insurance and other forms of relief, their relatively rapid return to work represents a beneficial development for our recovery.

A 2019 analysis by the New American Economy, immigrants, who make up 14% of the population, wield $1.3 trillion in spending power.

“Immigrants are poised to play a large role in the economic recovery as they return to work and regain some of this spending power. Their ability to spend more will further drive demand for goods and services that will help bring workers back into the ranks of the employed,” the report reads.

The report also states that immigrants are more likely to be of prime working age (between 25 to 54 years old), and more likely to work in STEM (science, technology, engineering and math.)

They are also less likely to be children: only 6% are under the age of 18, compared to 25% of native-born Americans. This results in migrants holding a disproportionate amount of people in the workforce, and thus, actively contributing to programs like Social Security.

The report explained that in recent years, immigrants who achieved degrees in STEM made up an increasing share of the innovators that are creating new U.S patents. Immigrant innovators are also responsible for more than 75% of patents from the top 10 patent-producing universities in the country.

Lastly, the report emphasized that immigrants are more likely than native-born Americans to start their own businesses, and this entrepreneurship makes them essential in encouraging “future economic dynamism.”

Three-fourths of all businesses owned by Asians are owned by immigrants. Immigrants also own half of all Hispanic-owned firms and about one-fourth of all Black-owned companies.

Over 3 million immigrant entrepreneurs employ nearly 8 million American workers across the country and the New American Economy estimates that immigrants and their children have conceived almost half of all Fortune 500 companies.

In the report’s conclusion, CMS, JECD and the Hispanic Caucus reiterated that the energy, input, spending power, and entrepreneurship of immigrant workers in America is absolutely paramount as we continue to rebuild the economy.

“Immigrants help fuel economic activity through their attachment to the labor market, their spending power and their entrepreneurial spirit behind much of our innovations,” the report reads.