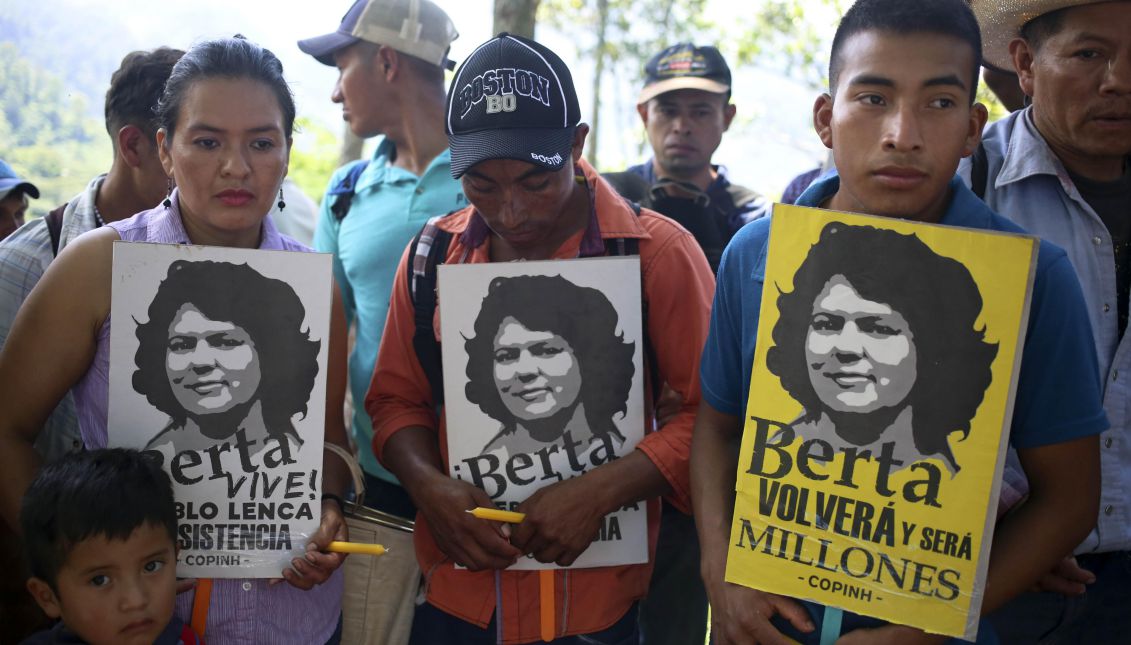 Some media say that since coming to power in 2012, Honduran President Juan Orlando Hernandez turned a blind eye to multiple human rights violations and murders of activists like Berta Cáceres. EFE / Gustavo Amador

The Spanish newspaper La Vanguardia illustrates this with Salvador Nasralla, the candidate of the opposition coalition, Alianza, in the presidential elections next November 26.

Nasralla, a famous sports commentator and a television celebrity, was press officer of the soccer team that represented Honduras in the World Cup in Spain. "He always travels with the Honduran team (who has just qualified for the World Cup finals, when United States lost against Trinidad and Tobago)", according to La Vanguardia, "and was signed by former President Manuel Zelaya – toppled by a coup in 2008 - to give a popular face and disguise de left”.

Nasralla has been warning of possible electoral fraud and pointing the finger at the current president, Juan Orlando Hernández, for abuses of power and over controlling the judicial power.

According to La Vanguardia, since coming to power in 2012, "Hernández turned a blind eye to multiple human rights violations and murders of activists like Berta Cáceres”.

However, Honduras has experienced a descent of crime rates and, through the streets of one of the most violent cities in the world, San Pedro Sula, "you can see the US border patrol wearing its uniform, a force specialized in detaining immigrants on their way to the US", says La Vanguardia. The reason? Simply because "there is an unprecedented collaboration between the Pentagon and the new Honduran elite troops formed by US experts for the war on drug dealers”.

This is Trump's new form of assisting Central America: less help for development, and more military.

On that occasion, Kelly said that “Security and prosperity go hand in hand,” Kelly said, addressing top leaders of Mexico and Central America’s so-called Northern Triangle — Honduras, Guatemala and El Salvador. “You cannot do one without the other,” and put as an example what he called “the miracle of Colombia".

Kelly, who was chief of the Southern Command between 2012 and 2016, spoke about his experience at the helm of this US Army command, dedicated to cooperation with Central America, South America and the Caribbean.

"During that time you can see firsthand what violence is doing to our Central American neighbors," said Kelly, who mentioned the story of an immigrant woman who spoke to him and told him that, on the way north, “you are lucky” if you only suffer sexual abuse and don’t get killed”, EFE quoted.

If Orlando Hernández wins the election again, Honduras will consolidate itself as the United States’ backyard, La Vanguardia concludes.

The advantages remain to be seen.

According to a report by Médecins Sans Frontières (Doctors Without Borders or MSF) quoted in the newspaper El Mundo and published in May, half a million Central American immigrants try every year to flee to the United States. Most of the "walkers" come from the so-called Northern Triangle of Central America (TNCA), which includes Guatemala, Honduras and El Salvador.

MSF also gives data on the rise of deportations and asylum requests in Mexico due to the 'Trump effect'.

According to a photographic report of El País, some 600,000 Hondurans take refuge in the US, much of them fleeing from death and misery.