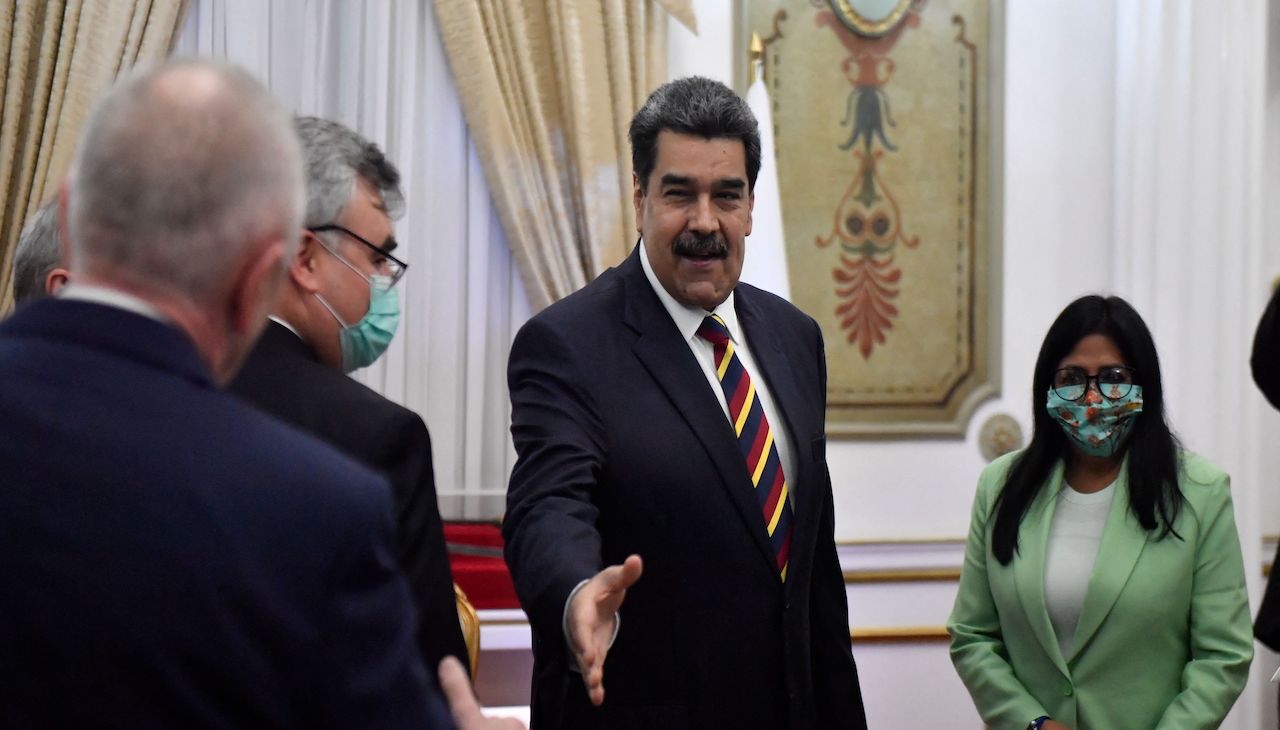 The U.S. broke off diplomatic relations with the South American country in 2019, after accusing Maduro of election fraud.

On Saturday, March 5, senior U.S. officials flew to Venezuela for a rare meeting with President Nicolás Maduro’s administration in an attempt to pull the South American country away from its Russian supporters after Russian President Vladimir Putin’s invasion of Ukraine.

White House and state department negotiators met with Maduro representatives in Venezuela’s capital, Caracas, for the first time in years. The U.S. broke off diplomatic relations with Maduro and closed its embassy in Caracas in 2019, after accusing the leader of electoral fraud.

It's part of an effort to drive a wedge between Venezuela & Russia, & is the highest-level visit by US officials to Caracas in years. https://t.co/LSu8eclb8M

The Trump administration then tried to overthrow Maduro’s government by sanctioning Venezuelan oil exports and by recognizing the opposition leader, Juan Guaidó, as Venezuela’s lawful president.

Maduro responded by seeking economic and diplomatic help from Russia, China and Iran. Since then, Russian energy companies and banks have been vital in allowing Venezuela to continue exporting oil, their biggest source of foreign currency, despite the sanctions.

When Russia invaded Ukraine, the U.S. started paying closer attention to Putin’s allies in Latin America, which the Biden administration believes could become security threats if the conflict deepens.

The U.S. delegation was led by Juan Gonzalez, the National Security Council’s senior director for the Western Hemisphere. Gonzalez was accompanied by Ambassador James Story, the top U.S. diplomat in Caracas when the Trump administration broke off relations with the country in 2019.

Senior U.S. officials will meet with members of the #Venezuelan government, writes the @nytimes.

The #Biden administration wants to "intensify efforts to separate Russia from its remaining international allies". pic.twitter.com/s9Jboc7jDG

U.S. officials have said the Biden administration will continue recognizing Guaidó as Venezuela’s rightful leader, but in a recent interview with America's Quarterly, Gonzalez said the primary focus is on negotiations, rather than toppling Maduro.

“Whereas the previous administration’s theory of change was based on regime collapse, ours is… that only a negotiation will lead to concrete and sustainable change in Venezuela toward democratic order,” he said.

In recent weeks, some U.S. investors have called on the Biden administration to lift sanctions on Venezuela so it can send more petroleum into the market. Chevron has also been urging the administration to modify its license to accept and trade oil in Venezuela.

But Florida Republican Sen. Marco Rubio has criticized the decision to travel to the country, stating that re-engaging with Venezuela could come at a political cost for the Biden administration and Democrats, especially in Florida.

U.S. Senator Bob Menendez, the Chairman of the Senate Foreign Relations Committee, also sharply criticized the negotiations, saying that Maduro is a “cancer to our hemisphere” and that the U.S. should not “breathe new life” into his reign of terror.

The democratic aspirations of the Venezuelan people, like the resolve & courage of the people of Ukraine, are worth much more than a few barrels of oil. My statement on the Admin's reported talks with VZ breathing new life into Maduro's reign of torture: https://t.co/3U4x6nGsLP

“The democratic aspirations of the Venezuelan people, much like the resolve and courage of the people of Ukraine, are worth much more than a few thousand barrels of oil,” Menendez said in a statement.