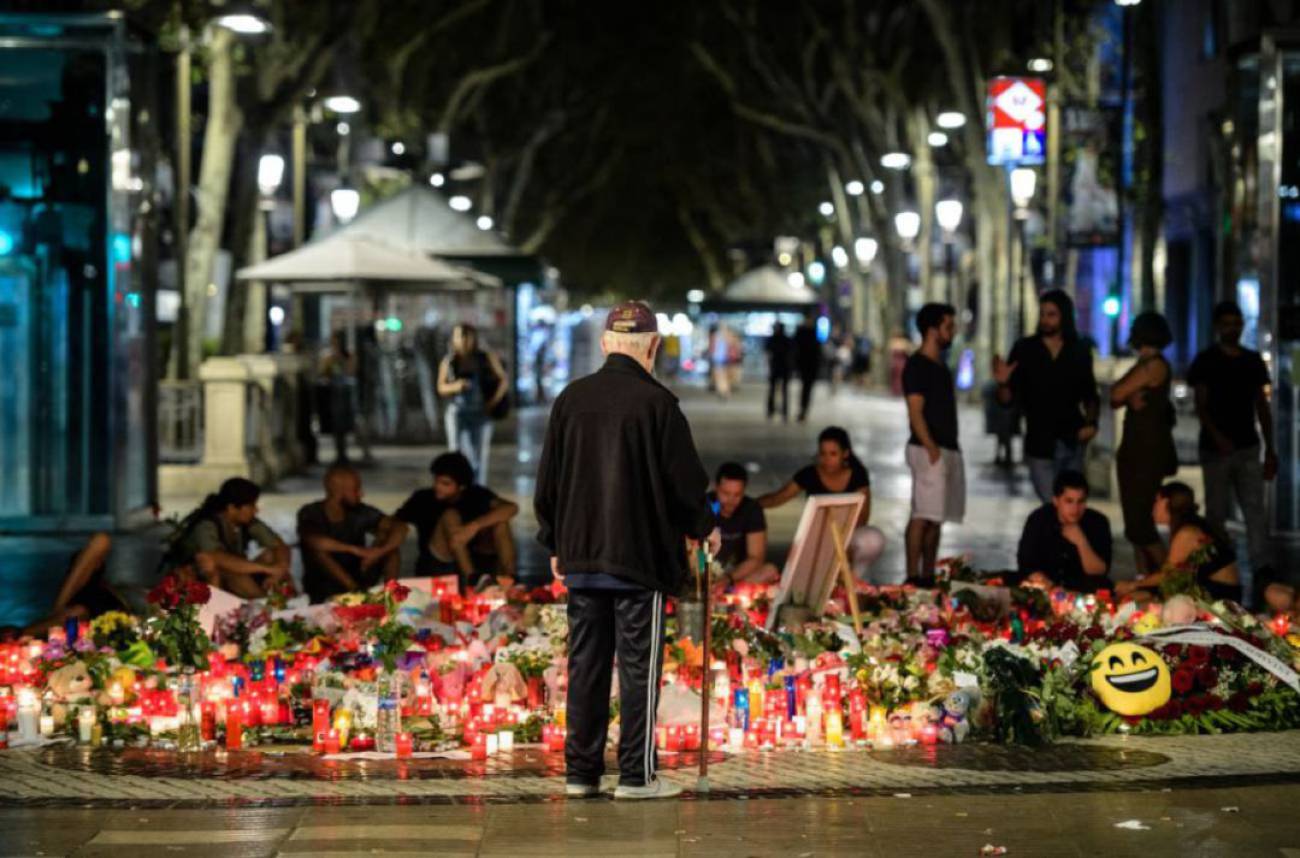 A memorial for victims of the 2017 Barcelona attack in Las Ramblas. Photo: Getty Images.

The attacks ended with 16 deaths and another 322 injured.

A few minutes after 5 in the afternoon on Aug. 17 four years ago, a van sped onto the Las Ramblas promenade in Barcelona.

The driver, later identified as Younes Abouyaaqoub zig-zagged down the street trying to take as many lives as he could. He murdered 14 people and when the van shut down, he ran and killed one more to steal their car. That night, his co-conspirators took the life of another person in a similar attack in the coastal town of Cambrils.

In total there were 16 deaths and another 322 injured.

Abouyaaqoub abandoned the van in the middle of Las Ramblas when he could go no further and fled through La Boquería market. Even in the madness, as dozens of citizens were still escaping, he answered someone who asked him what was happening.

"I don't know what is happening," he said with total coldness.

He crossed the city on foot and when he reached the university area, murdered Pau Pérez with a knife to take his car and leave the city. Four days later, the Catalan police found him 40 kilometers from Barcelona, ​​in Subirats. The terrorist had an explosive belt tied to his body as agents shot him and killed him.

The same night of the attack in Barcelona, ​​another five terrorists attacked the port of Cambrils. Six people were run over and one of them died hours later. The police were able to act before they continued with the attack and managed to overturn the vehicle with shots. The jihadists got out of the car with knives in hand and the police shot them down.

A few days before, a house in the south of Barcelona had exploded with at least 120 butane bottles. In it, one person died and seven others were injured. Later, it was learned that the first deceased was the mastermind of the attack, Imam Abdelbaki Es Satti.

The house had been the laboratory for the terrorists who, after the explosion, decided to attack in the van.

On the same day as the attacks, three suspects were arrested north of Barcelona. One of the survivors of the blast was also arrested after the attack. Moroccan police also arrested three other people, two of them for having collaborated with the terrorists and another for advocating the attacks.

The ordeal of the victims

It is the first anniversary that victims can celebrate with a sentence against the perpetrators of the massacre.

Last May, a court sentenced the three terrorists who did not die in the attacks: Mohamed Houli Chemlal was sentenced to 53 and a half years in prison, Driss Oukabir to 46 and a half years and Said ben Iazza to eight years for collaborating with members of the terrorist group. Their victims, in total, were 338. However, many have not yet been recognized or compensated.

The Unit for the Attention and Assessment of People Affected by Terrorism reports that compensation has only reached 22% of those affected. Two-hundred and forty-eight people are still waiting for compensation owed them according to law as victims of terrorism. One of the judges acknowledged in the sentence that "the victims have been the great forgotten" in this case.