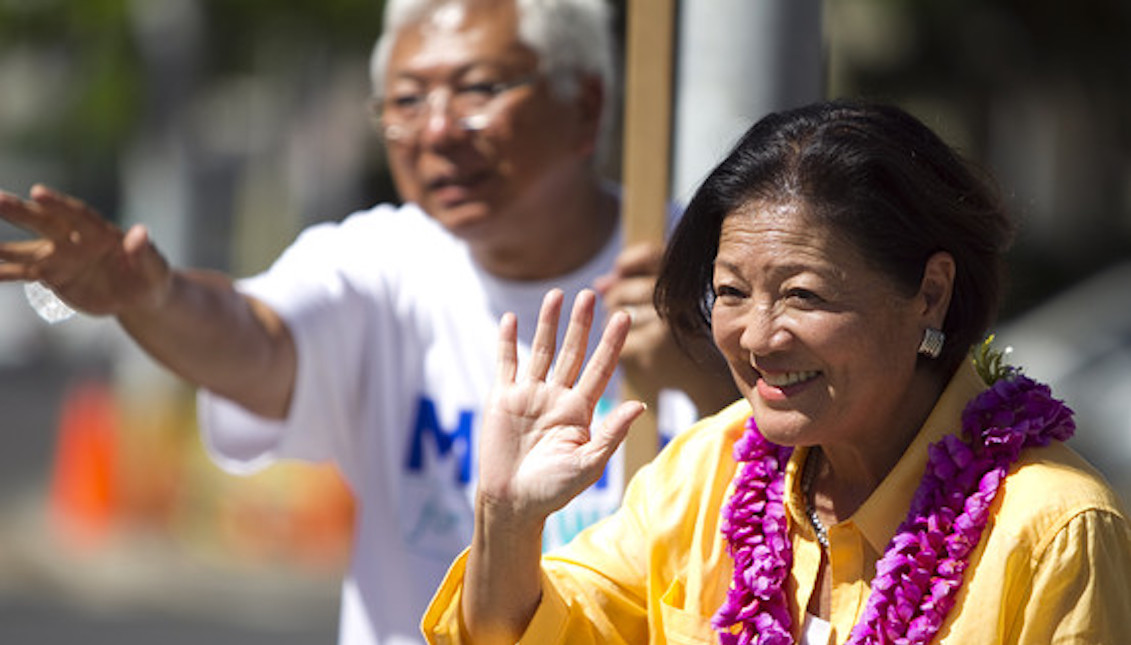 Photo showing the then representative of the House, Mazie Hirono, at a campaign event in Honolulu, on August 11, 2012. Source: AP.

Mazie Hirono, the only immigrant serving in the U.S. Senate, is a force to be reckoned with

In a country where the immigrant feels threatened and unprotected on a daily basis, the story of Mazie Hirono is an example that the United States is still a…

Few have paid attention to the smiling senator with Asian features who fervently participates in every debate.

It wasn’t until June 2017 that her speech on the floor of the Senate put the focus of the cameras on her history.

"We are all one diagnosis away from having a serious illness," said Mazie Hirono (Koori, Japan, 1947), a senator from the state of Hawaii. "Lots of us believe that getting a serious illness is something that happens to other people. I was one of them."

Making public her recent diagnosis of kidney cancer, Sen. Hirono put on the table the importance of saving Obamacare.

"(The diagnosis) is a moment everyone dreads. Thankfully, I have health insurance," she added. "I was able to sit down with my doctors and decide how I would fight my cancer, and not how I would pay for treatment."

Since then, the story of this politician has made headlines, as an immigrant first in many things.

Hirono is the first woman to be elected senator in Hawaii, the first American woman of Asian origin to reach the Senate, the first member of the Senate born in Japan, and the first to be a Buddhist (even though she considers herself non-practicing).

Born in Fukushima Prefecture, her mother was an American citizen and her maternal grandfather had immigrated to Hawaii to work in the sugarcane plantations.

After a torturous marriage in Japan, her mother decided to immigrate with her children to Hawaii, and offer them a better life away from her native island, as recalled by MidWeek in 2007.

A childhood of deprivation and a working mother allowed her, little by little, to train and study while working to help her family. After graduating from the University of Hawaii at Manoa as a psychologist, she then left the island to attend law school at Georgetown University, and returned to Honolulu in 1978 to practice as a lawyer, reported Medium.

At a time when female representation in politics was virtually non-existent, Hirono was elected in 1980 as representative of the 12th District as a Democratic candidate. During three redistricting processes, Hirono was elected to districts 20, 32 and 22, serving as a representative in the Chamber of Hawaii and passing more than 120 laws. In 1994, she left her seat to become governor of the island, winning with 65 percent of the vote and being reelected in 1998.

Despite being a favorite of the population, Hirono lost the governorship in 2002 to the mayor of Maui, Republican Linda Lingle.

Returning to the House race, Hirono won the seat for the 2nd District with 61 percent of the votes in 2006 and was re-elected for the next two terms.

Her work was that of "more actions and fewer words", marking a strong position in support of abortion, medical care and protection of the environment.

In May 2011, Hirono announced her candidacy for the Senate seat vacated by Sen. Daniel Akaka after his retirement, winning the primary in August, and defeating her former opponent, Linda Lingle.

Hirono thus became the first female senator from Hawaii, and the first immigrant to reach the floor of the Senate.

Her positions have been clear in terms of gun control (she received an F rating from the National Rifle Association), constantly voting in favor of strengthening control measures, and regarding the right to access to healthcare, especially after her cancer diagnosis in 2017.

Today, she has decided to speak clearly about her opposition to Trump’s management, emphasizing her personal trajectory.

"Immigrants come here and leave everything they know behind," she said in an interview with TIME magazine. "We have a sense of the opportunities that this country provides. We do not take those for granted."

"Our country is made up of groups of immigrants who came hoping for a better life. They created America. It's a sad thing to have so many people not remember that, including Trump. His people came from another country, not to mention that his wife is an immigrant."