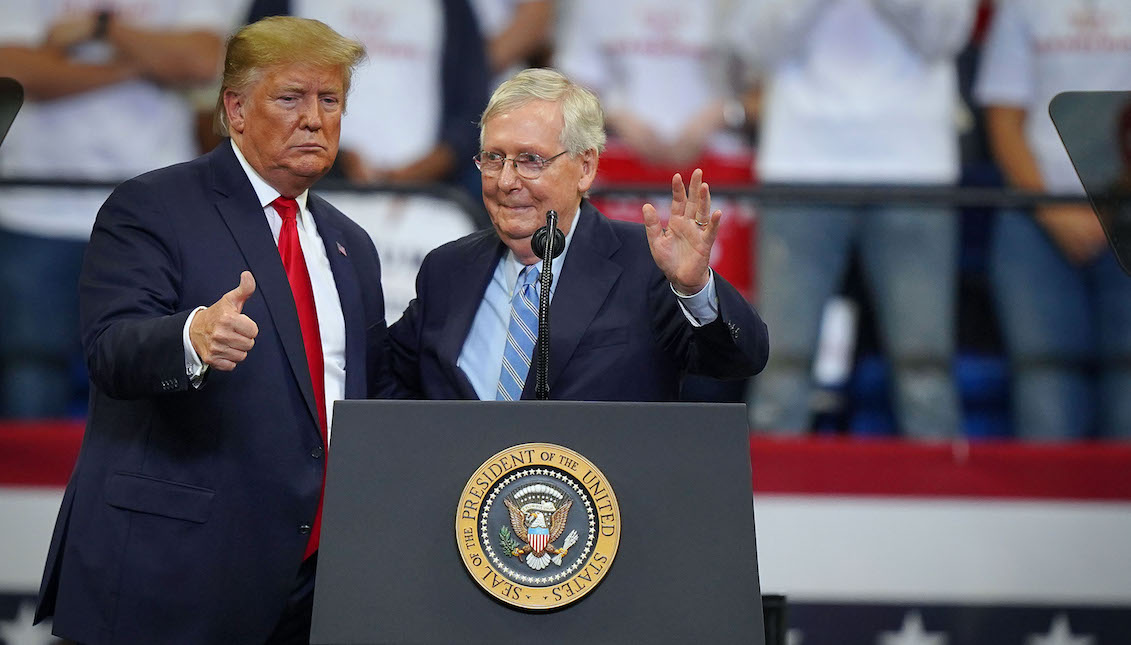 Republicans' fear of evidence, or why the Senate majority doesn't want a long trial against Trump

The Republican majority's strategy toward Trump's impeachment in the Senate has raised many eyebrows about the possibility of an unfair trial.

After the House Judiciary Committee last Wednesday announced consideration of two impeachment articles against President Trump, the Republican Party already knew what to expect when it came to legal defense.

Abuse of power and obstruction of Congress are the two charges for which the committees charge Trump after months of investigation in the Democratic majority House.

Despite great evidence and endless hours of testimony, Republicans continue to insist that this is a "political coup" by Democrats, who “are still not over” the fact that they lost the 2016 election.

Now that impeachment is on the Senate floor, Republican tribalism has reappeared on the scene when majority leader Senator Mitch McConnell said last week he was "working hand in hand with the White House" to prepare for trial.

According to the New York Times, the president has pressed privately for "a lengthy process that will allow him a theatrical defense.” But McConnell, for his part, has resisted and insisted on a "shorter and more dignified event.”

Needless to say, McConnell's open determination to work with the White House immediately compromises him, giving reason to those who argue that Republicans cannot be impartial.

Representative Val B. Demings, a Florida Democrat, who could be the House manager during the trial, said in a statement: "No court in the country would allow a member of the jury to also serve as the accused’s defense attorney.”

Demings went further and demanded that McConnell recuse himself from the proceeding: "The moment Senator McConnell takes the oath of impartiality required by the Constitution, he will be in violation of that oath.”

The risk to McConnell's party is that the more space is given to the immense evidence in the hands of Democrats, the harder it will be to defend the president.

Senate Minority Leader Chuck Schumer addressed a letter to his colleague inviting him to respect the need for a fair trial.

“Senate Democrats believe strongly, and I trust Senate Republicans agree, that this trial must be one that is fair, that considers all of the relevant facts, and that exercises the Senate’s ‘sole power of impeachment’ under the Constitution with integrity and dignity,” Schumer wrote.

To that end, the senator recommends inviting witnesses of the caliber of Mick Mulvaney (Trump's chief of staff), John Bolton (former national security advisor) and Michael Duffey, Associate Director of Homeland Security, to the Senate floor.

Democrats thus demonstrate their confidence in the evidence collected, and how the latest testimony could hammer the last nail in the coffin of Donald Trump's presidency.

That's why the president's defense doesn't want new witnesses and a fast-track procedure in which the Republican majority simply acquits the president, despite having all the evidence against them.

However, both leaders will need to agree on the parameters of the trial that is presumed to begin as early as the first week of 2020.

According to McConnell spokesman Doug Andres, the Republican leadership does not intend to negotiate "publicly" before meeting with Schumer, Politico reported.

Before doing so, the Republican Senator must secure at least 51 of the 53 Republican senators on his side, and thus dictate the rules - and, honestly, the outcome - of the fourth impeachment in the nation's history.