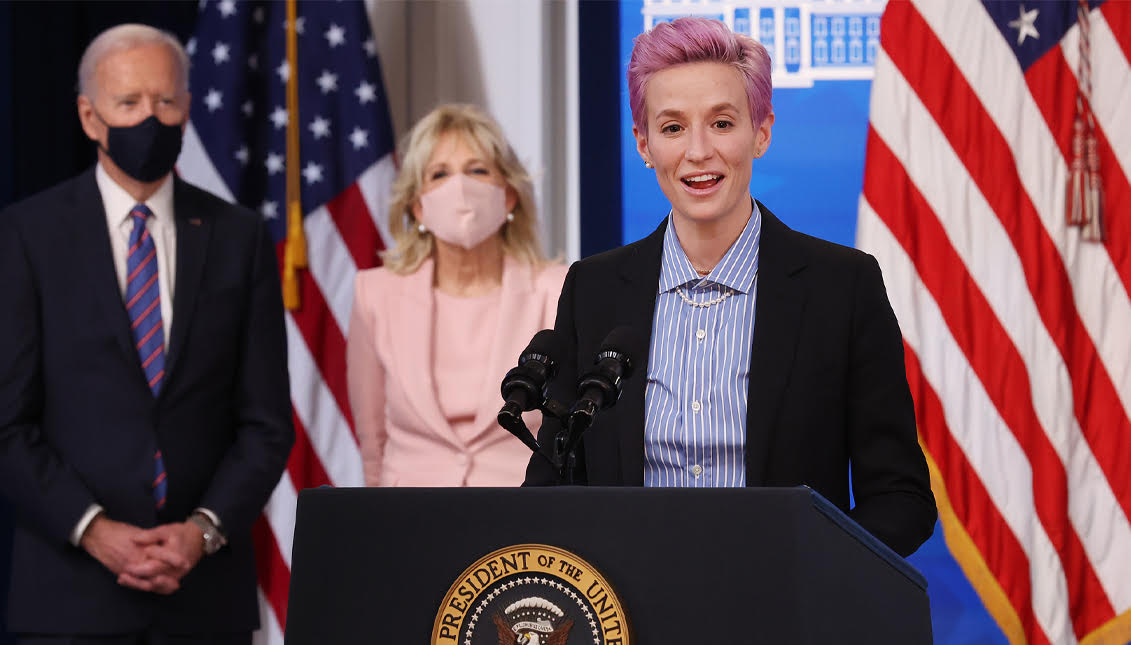 The U.S. women’s soccer legend was in D.C. talking to the president with many of her teammates tuned in virtually to the discussion.

“I’ve been devalued, I’ve been disrespected and dismissed because I am a woman. Despite all the wins, I’m still paid less than men who do the same job that I do. For each trophy, of which there are many, and for each win, for each tie and for each time that we play, it’s less,” Rapinoe said.

The soccer champion also made a point to acknowledge that the women’s soccer team’s lack of equal pay is a miniscule part of the global patriarchy, but it is still important to address and solve.

“I know there are millions of people who are marginalized by gender in the world, and experience the same thing in their jobs. And I know there are people who experience even more, where the layers of discrimination continue to stack against them. And I and my teammates are here for them. We on the women’s national team today are here because of them,” Rapinoe said.

Earlier in the day, Rapinoe testified in front of the House Oversight Committee during a hearing focused on gender pay inequalities. She has long been vocal on gender and racial equality for years, and in January, participated in a lengthy Instagram live conversation on the matter with President Biden.

The U.S. women’s soccer team has had an enormous amount of success, but they are still facing pay inequality and a frustrating lack of investment.

On Wednesday, Rapinoe maintained that the world is truly missing out on the “real potential of women’s sports” due to the pay and working condition inequities.

Rapinoe wondered about how high her team could rise, given the proper investment.

“What we know is how successful women’s sports have been in the face of discrimination, in the face of a lack of investment in every level in comparison to men,” she said.

"You want stadiums filled? We fill them. You want role models for your boys and girls, we have them... We've done all of that, there's no reason we are underpaid for the exception of gender." - Megan Rapinoe

Rapinoe’s testimony comes on the heels of outrage over clear inequalities between the NCAA’S men’s and women’s basketball tournaments, which she called “completely unacceptable.”

On Saturday, March 20, the NCAA was obligated to improve weight training facilities in San Antonio that the women’s team uses after photos and videos of the facility surfaced on social media. The footage revealed a drastic disparity between those at the men’s event held in Indianapolis.

Rapino called out NCAA president, Mark Emmert by name, flatly stating that he “has to do better.”

"For an organization like the NCAA, similar to the U.S. Soccer Federation, that's a nonprofit, it's just absolutely unacceptable," Rapinoe said. "To say that you value your student-athletes and to have your women's players show up for one rack of dumbbells is just completely unacceptable."

Rapinoe, in her meticulously prepared speech, also called on lawmakers to join the battle to achieve equal pay. Citing the team’s numerous wins, and made the statement that “one cannot simply outperform inequality of any kind.”

To mark Equal Pay Day, @FLOTUS and I are hosting an event with Megan Rapinoe, Margaret Purce, and members of the U.S. Soccer Women’s National Team. Tune in. https://t.co/fZBqoOLBv5

"If that [pay inequality] can happen to us, to me, with the brightest lights shining on us -- it can, and it does, happen to every person who is marginalized by gender. And we don't have to wait. We don't have to continue to be patient. We can change that today. Right now. We just have to want to,” she said.

“With our new leadership at U.S. Soccer and so much to look forward to, my hope is the players will accept our standing invitation to meet and find a path forward that serves the women's team now and in the future,” Parlow Cone said.