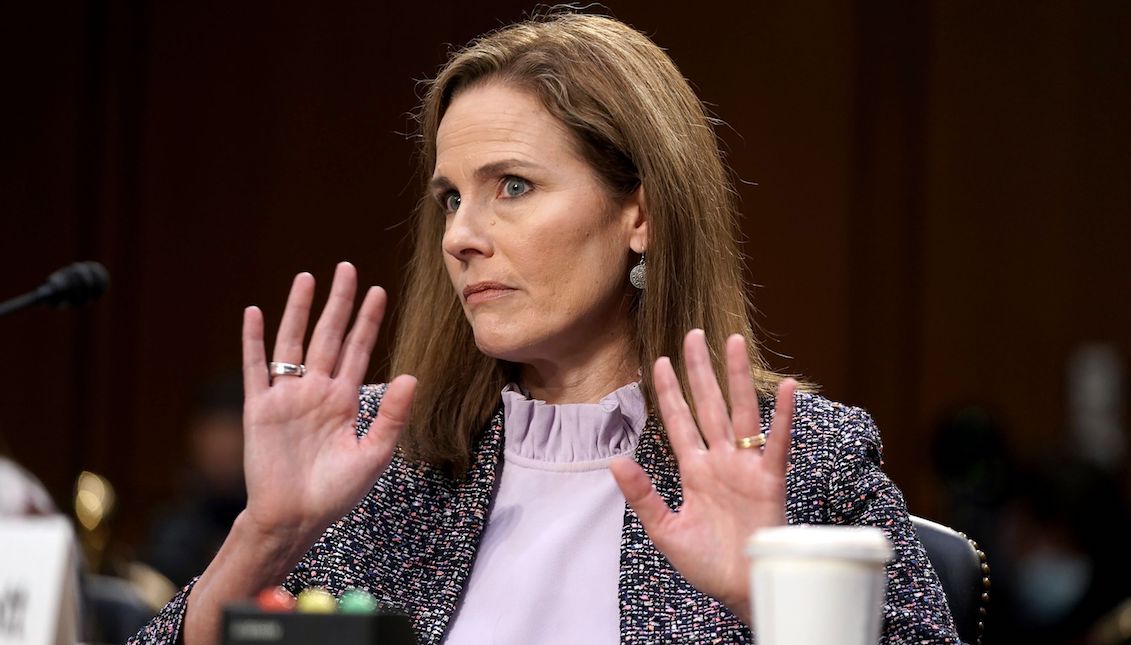 Judge Amy Coney Barrett commented on her own past writings, decisions and general legal philosophy, but not much else during her hearing before the Senate. Photo: Getty Images.

The presidential nominee to the Supreme Court has left many concerned about her refusal to answer questions, and what her record might mean for the country.

After four days and more than twenty hours of questioning, President Donald Trump's Supreme Court nominee, Justice Amy Coney Barrett, was the epicenter of one of the most disturbing chapters of the last four years.

The untimely and sad death of Justice Ruth Bader Ginsburg gave the Republican Party the opportunity to secure a super-majority in the country's highest judicial body, even though this might contradict its positions during previous administrations.

Together with the Republican leadership of the Senate, President Trump has done everything possible to carry out the fastest swearing-in in the country's history, in what many interpret as the prelude to a conflicted transition of power after the presidential election.

Donald Trump had nominated Barrett for the Seventh Circuit on May 8, 2017, and was confirmed by the Senate on Oct. 31. Eleven months later, her name was on the list of potential Supreme Court nominees.

Her judicial record, as well as her academic background, made her, on paper, a worthy candidate, but far from the profile that could sit in the seat once occupied by the iconic "Notorious RBG.”

But putting her name alongside that of President Donald Trump led to the media getting the skeletons out of her closet.

Barrett is seen as a right-wing, textualist and originalist judge, attached to the constitutional text, something her critics consider dangerous for legal debates on civil rights.

Although the judge argues that her legal philosophy is close to that of the late Justice Scalia — who was also a close friend of RBG — it was her response to questions from Democratic senators during her confirmation hearing that gave us a true picture of what the Supreme Court might become once the young judge is sworn in.

When the lack of answers is a blunt response

During her first day of hearings, Judge Amy Coney Barrett demonstrated from the first minute that her confirmation did not depend on the hearing, and that her arrival at the Supreme Court was guaranteed by the politicization of the procedure.

With no notes at hand, and with undeniable stoicism, Barrett did not determine what her positions would be on critical issues such as abortion, elections or equal marriage, much less on the Affordable Care Act.

She did not say whether separating children from their parents to deter immigration is a mistake, whether President Trump can delay the election or forgive himself, or even, in a particularly notable set of responses, whether climate change is real. Nor did she say whether a number of Supreme Court decisions, including those on abortion and gay rights, are sufficiently evaluated to be reconsidered.

“Though past nominees have also avoided answering some of the senators’ questions, Barrett took this to a whole new level,” said Paul M. Collins Jr., a political scientist at the University of Massachusetts, Amherst. “Having studied how forthcoming nominees have been since public confirmation hearings at which nominees testified began in 1939, I think Barrett will rank as among the least responsive nominees in American history.”Obamacare remains a matter of debate and not a right

Knowing that the Supreme Court will hear a case related to the Affordable Care Act (also known as Obamacare) only a week after the November election, most Democratic Senators tried to put the issue at the center of Judge Barrett's hearing.

The nominee repeated several times that she had no agenda, and claimed not to have made a previous deal or discussed the issue with the president before her nomination.

However, with the disturbing serenity of an experienced university professor, she said, "I am not here on a mission to destroy the Affordable Care Act.”

As NPR explained, the pending case involves the question of "severability," whether a key provision of the law — the individual mandate requiring insurance — is legally sound, and whether removing it would undermine the entire law. GOP briefs submitted by the administration argue the invalidity of the law.

When asked about this, Barrett simply said he was "always in favor of separability.”

Covering up an anti-abortion past

Despite not revealing her full record as an anti-abortion activist to the Senate, Barrett had to admit she signed two anti-abortion ads calling for the annulment of Roe v. Wade in a few pages published in 2006.

Both her and her husband's signatures appeared on a petition that read: "We… oppose abortion on demand and defend the right to life from fertilization to natural death." The opposite page, which Barrett this week said she hadn't seen prior to its publication, said, "It's time to put an end to the barbaric legacy of Roe v. Wade."

Barrett argued to the Senate that he had signed the announcement as he left the church, at a "table set up for people to sign a statement as they leave Mass ... validating their commitment to the position of the Catholic Church on life issues.”

Similarly, and as reported by CBS News, as a professor at Notre Dame Law School in 2013, Barrett included her signature in a paid advertisement referring to Roe v. Wade as "infamous," and said, We faculty and staff at the University of Notre Dame reaffirm our full support for our University's commitment to the right to life, we renew our call for the unborn to be protected in law…"

"I think that statement is an affirmation of life," Barrett told senators this week, explaining his involvement. "It is nothing more than the expression of a pro-life view.”

However, the judge refused to answer whether Roe v. Wade was decided correctly, explaining to California Senator Dianne Feinstein that "If I express a view on a precedent one way or another, whether I say I love it or I hate it, it signals to litigants that I might tilt one way or another on a pending case."

If confirmed by the Supreme Court, Barrett will almost certainly hear a case that challenges legal protections surrounding abortion services.

Today, 17 abortion-related cases are one step away from the Supreme Court and two — including a 15-week abortion ban in Mississippi that challenges Roe's central tenet — could be taken up as early as his next term, CBS continued. Dozens more cases, including last year's handful of six-week abortion bans, are making their way through the judicial system.

The alarming misuse of LGBTQ+ terminology

At the beginning of the confirmation hearing on Tuesday 13, Justice Barrett used the term "sexual preference" to respond to the Supreme Court's 2015 decision in Obergefell v. Hodges, which granted the right to same-sex marriage, a choice of words that alarmed many people, both within and outside the LGBTQ community.

Among them was Democratic Senator Mazie Hirono.

"Even though you didn't give a direct answer I think your response did speak volumes," Hirono said. "Not once, but twice, you used the term sexual preference to describe those in the LGBTQ community. And let me make clear, sexual preference is an offensive and outdated term."

Hirono continued, "It is used by anti-LGBTQ activists to suggest that sexual orientation is a choice. It is not."

She added that if Barrett believed "that sexual orientation is merely a preference," then the LGBTQ community should be "rightly concerned" whether the judge would uphold their constitutional right to marry.

"I certainly didn't mean, and would never mean, to use a term that would cause any offense in the LGBTQ community," she said. "So if I did, I greatly apologize for that."

As explained by CNN, the term sexual preference has been rejected for decades by activists and community members, as well as medical specialists.

"The word preference suggests a degree of voluntary choice that is not necessarily reported by lesbians and gay men and that has not been demonstrated in psychological research," the American Psychological Association (APA) noted in a journal article published in 1991.

Republicans are willing to do anything to get confirmation

According to the Associated Press, Amy Coney Barrett is expected to be confirmed in the Supreme Court next Monday, as Republicans speed up proceedings to give the president one last victory before election day.

Senate Majority Leader Mitch McConnell said he will begin the process to confirm Barrett, 48, as soon as the Senate Judiciary Committee votes on his nomination Thursday. After Thursday's vote, procedural votes are expected on Friday and will continue over the weekend.

With a 53-47 majority for the GOP in the Senate, and only two Republican senators opposed, the 48-year-old appeals court judge is expected to be confirmed for a lifetime appointment to the nation's highest court, cementing a conservative majority of 6-3 in the years, if not decades, to come.

Democrats have few resources to block Barrett's confirmation, but have repeatedly condemned the rush to confirm a court nominee so close to an election. They expect two more Republican senators to break ranks, Newsweek reported.

In a speech at the opening of the Senate on Monday, Senate Democratic leader Chuck Schumer condemned the Republicans for holding what he said were "absurd" hearings to confirm Trump's Supreme Court nominee, even though some Republican senators were ill or exposed to the coronavirus.

"Last week, the Republican majority on the Senate Judiciary Committee concluded what can only be described as a farcical set of hearings for a Supreme Court nominee, in the midst of a pandemic when several members of the committee majority were exposed to or tested positive for coronavirus or themselves were sick with COVID-19 in the days immediately beforehand," he said.

"Why? Because the Republican majority wanted to jam this nomination through before the election."

Noting Senate Republicans have ignored the precedent they set four years ago when they refused to consider Barack Obama's Supreme Court nominee, Merrick Garland, Schumer added: "The Republican majority is running the most hypocritical, most partisan and least legitimate process in the history of Supreme Court confirmations," he added.