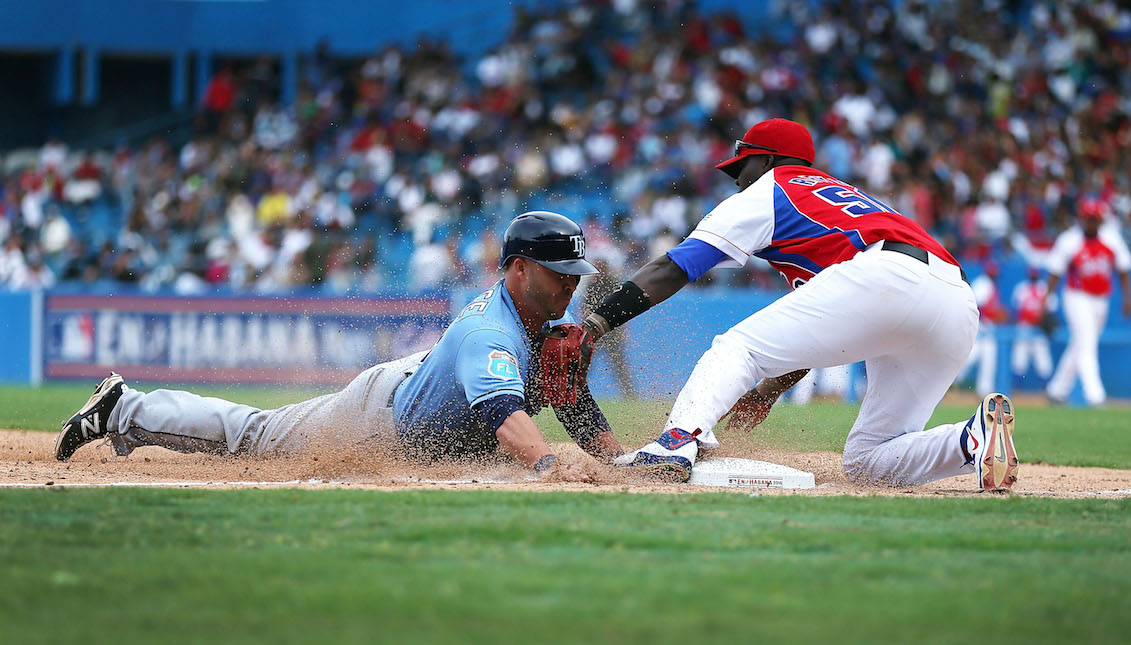 HAVANA, CUBA - MARCH 22: Tampa Bay Rays Steve Pearce dives safely into third base during the exposition game between the Cuban national team and the Tampa Bay Rays of the Major League Baseball at the Estado Latinoamericano March 22, 2016, in Havana, Cuba…

One of the greatest points of pride in the Island of Cuba has been strongly beaten by the Trump Administration on Monday.

Just four months after signing an agreement between the two most important baseball organizations in both countries, the U.S. government announced the termination of the pact arguing that it’s illegal.

Considering that the White House has reversed the Obama era measures toward the island - like the lifting of the embargo - theoretically, any type of economic agreement between the MLB and the FCB would be in violation of the law that prohibits negotiations with the Cuban government.

According to the Washington Post, the agreement allowed selected Cuban players "to receive 100 percent of a signing bonus, while the MLB clubs would pay an additional 25 percent of that to the federation as a release fee."

This protocol was established within the framework of President Obama's strategies “to avoid the previous scenario under which Cuban players who wanted to play on U.S. teams had to defect and declare residency in the U.S. to join a team," explains NBC News. "Doing so often meant coming into contact with organized crime groups and risking violence."

However, Republican members and Trump government officials, such as Florida Senator Marco Rubio and White House national security adviser John Bolton, have campaigned for the suspension of the agreement arguing it’s an incentive to “human trafficking.”

For its part, the Cuban Baseball Federation said that, contrary to what the Trump government could say, the agreement "seeks to stop the trafficking of human beings" and that its suspension with political motivation "harms the athletes, their families, and the fans."

The agreement with #MLB seeks to stop the trafficking of human beings, encourage cooperation and raise the level of baseball. Any contrary idea is false news. Attacks with political motivation against the agreement achieved harm the athletes, their families and the fans pic.twitter.com/7d3Feu26kB