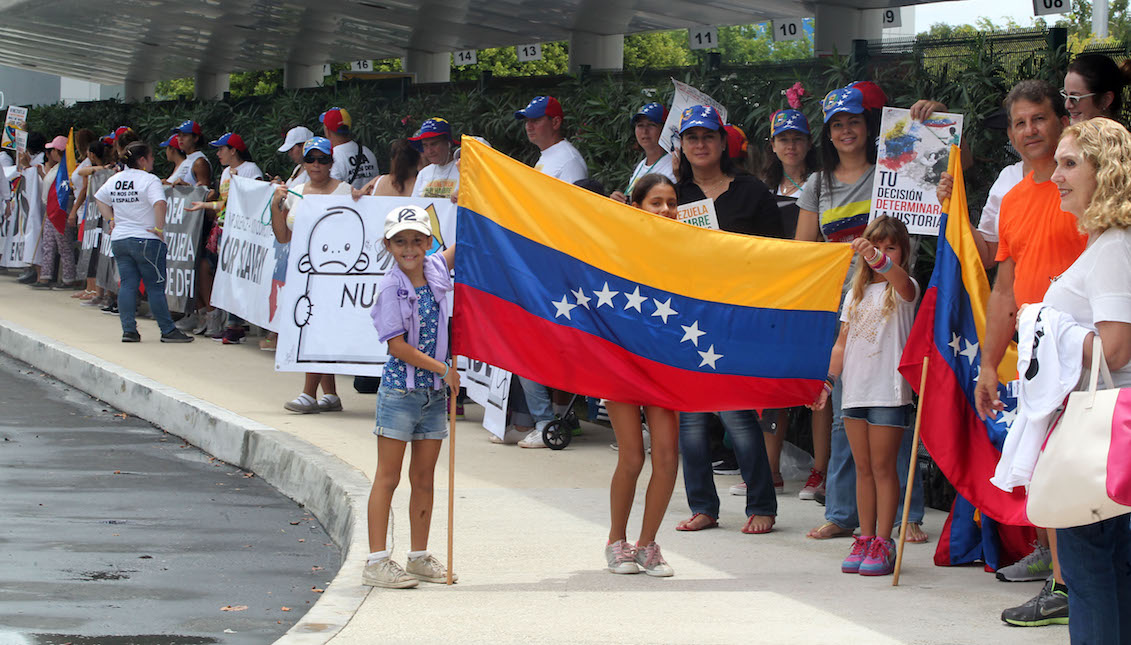 Venezuelan citizens gather today, Sunday June 18, 2017, around the hotel to host the meeting of the Organization of American States (OAS), which will start this Monday in the city of Cancun, in the state of Quintana Roo (Mexico). EFE/ Alonso Cupul

The 47th OAS General Assembly will be held on June 21 in Cancún, Mexico, convening the region's foreign ministers to continue the suspended consultation on the…

According to a statement from the Organization, the foreign ministers of the region will meet before the General Assembly to address the situation of Venezuela whose ongoing crisis has taken more than 60 lives in 80 days of demonstrations strongly suppressed by the government of Nicolás Maduro

As the official subject of the Assembly is "Strengthening Dialogue and Agreement for Prosperity," the issue of the Venezuelan crisis is at the epicenter of the debate.

According to the newspaper El País, a "block of 14 countries", among which are Mexico, Colombia, Argentina and Peru, with the support of the United States, will seek a "resolution that condemns the actions of the Government of Nicolás Maduro and the claim that the Constituent Assembly is not held. "

But in order to reach a consensus, the block of countries opposed to the Venezuelan government would need the support of the Caribbean Community countries (CARICOM), which often support Chavism, since for years they have benefited from Venezuelan oil subsidized by Petrocaribe. Likewise, Venezuelan Foreign Minister Delcy Rodríguez has announced her intentions to attend the meeting to denounce what she considers "an interventionist plan" against the Venezuelan process. Rodríguez "will present a battle with a large team and several aces up her sleeve, including a possible resolution on a very thorny issue for the host country: the case of the 43 students who disappeared in Ayotzinapa in 2014," EFE reported.

It should be recalled that it was the same Chancellor Rodriguez who announced previously the intention of Venezuela to withdraw from the Organization.

The meeting before the General Assembly today will try to resume the suspended dialogue on May 31 in Washington, which failed to reach an agreement among the proposals for a statement submitted by the foreign ministers, according to the Venezuelan daily El Universal.

During the last event, "the text of the group headed by the United States, Mexico, Peru and Canada called for Maduro to ‘cease’ the Constituent Assembly, to release political prisoners and to schedule an electoral calendar with international observation," continues the report.

The text of the block of countries echoed the demands of the Venezuelan opposition, who have 80 days in the streets, holding continuous demonstrations also requesting the suspension of civilian trials in military courts, the cessation of violence and the opening of a humanitarian channel to provide food and medicines that are scarce in the country.

For their part, the Caribbean countries proposed a project that differed greatly from the first, only coinciding in the request for the cessation of violence to all parties involved, a new process of dialogue and the reconsideration of Venezuela's decision to leave the organization.

To reach an agreement would not be simple, since it would require the vote of 23 countries to make any decision, representing two thirds of the 34 attending countries, according to EFE.

For several international analysts, if the meeting may not reach an agreement again, the 14 countries opposed to Maduro’s measures could explore alternatives such as trying to pass a "draft resolution already in the General Assembly itself, where only 18 votes are needed. "

The bloc's last resort, if they failed to get the necessary votes, would be the issuance of a "signed press statement with its position on the Venezuelan crisis."

In one way or another, the situation in Venezuela will be the epicenter of the Assembly, which will be inaugurated this evening by the Mexican President Enrique Peña Nieto and will conclude on Wednesday.