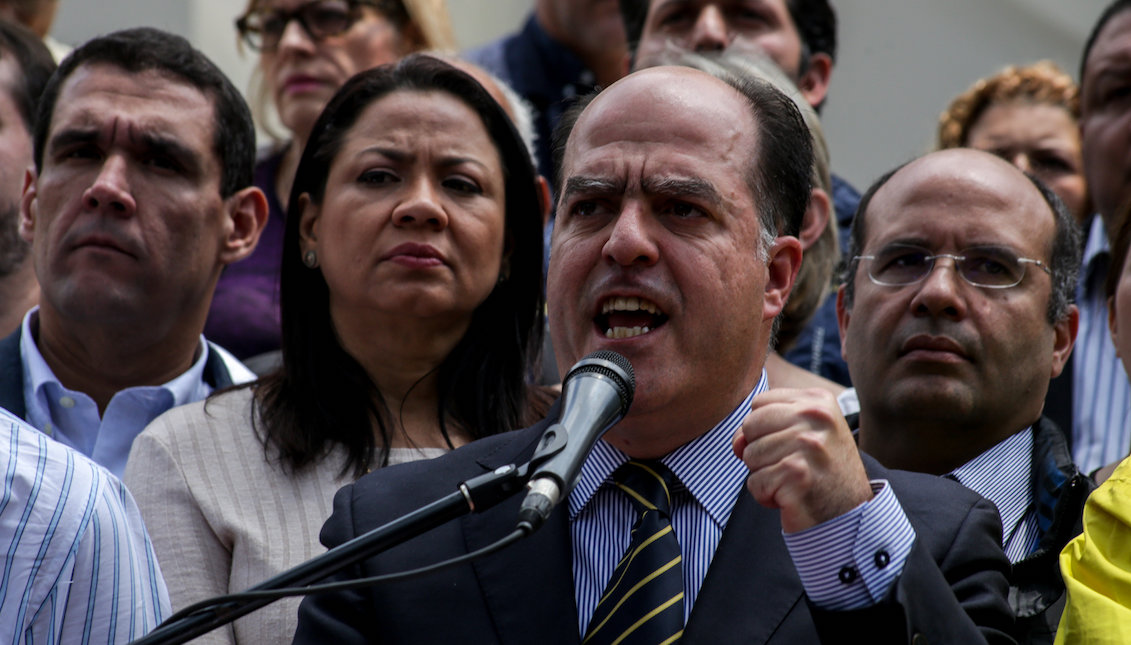 The president of the National Assembly of Venezuela (AN), the opposition candidate Julio Borges (c), speaks during a press conference, from the Legislative Palace today, Thursday, March 30, 2017, in Caracas, Venezuela. EFE / CRISTIAN HERNÁNDEZ

During the night of Wednesday the President-designated in Venezuela by Hugo Chavez before his death, Nicolás Maduro, has annulled the General Assembly,…

Venezuelan President Nicolás Maduro has used once again the Supreme Court of Justice - controlled by the leaders of his government - to dissolve the opposition majority parliament, elected in 2015.

During Tuesday, the TSJ had advanced its strategy removing the immunity of the opponents deputies, opening the possibility to prosecute them even before military courts, according to El Comercio.

The sentence would have an economic background since it resulted as a response to an appeal on the creation of joint ventures in the oil sector that would go against the Constitution if it doesn’t have the approval of the National Assembly. The Supreme Court, on the other hand, indicated that there was no impediment to carry out the economic measure with which Maduro intends to attract foreign investment, completely omitting the legislative institution.

After the resolution, the Secretary General of the Organization of American States (OAS), Luis Almagro, urgently convened the Permanent Council to address the constitutional violation of Maduro's measure.

"Almagro issued a statement rejecting the ruling (...) that ordered the Constitutional Chamber to assume the powers of the National Assembly. The secretary general of the OAS denounced a self-coup d'état of the government against the Parliament ", as El Nacional explains.

The Organization of American States would have warned in its reports of May 30, 2016 and March 14, 2017 of the serious democratic crisis that the Caribbean country was suffering.

The Venezuelan opposition echoed Almagro's statements, denouncing an open coup in the voice of Julio Borges and opposition leader Hernique Capriles, governor of the State of Miranda and a former presidential candidate.

The ruling of the Supreme Court of Justice would be based on the current State of Exception in Venezuela, which, however, does not establish the disappearance of public powers, according to the Constitution.

Borges would have called on the Armed Forces to intervene, asserting, "We know that the officers of the National Armed Forces suffer the same tragedy of the cost of living, of violence. We want to call them to be the first guardians of democracy and the constitution in Venezuela and become part of the solution, "as reported by El País.

Venezuelan opponents Carlos Vecchio and Luis Florido compared the resolution with what happened on April 5, 1992 in Peru under Alberto Fujimori.

For its part, the Brazilian government said that the measure of the Venezuelan court is "a constitutional rupture" calling for dialogue between the parties.

After interventions by personalities, institutions and even the Vatican to mediate between the two benches in Venezuela, it seems that Maduro's decision assumed that the country belongs to only a few and that the fragile opposition will not have a way to reach a Democratic agreement.

At the moment Peruvian President Pedro Pablo Kuczynski has withdrawn his ambassador in Caracas as a measure to condemn the "rupture of democracy in Venezuela" and the Venezuelan opposition has announced protests starting Saturday.