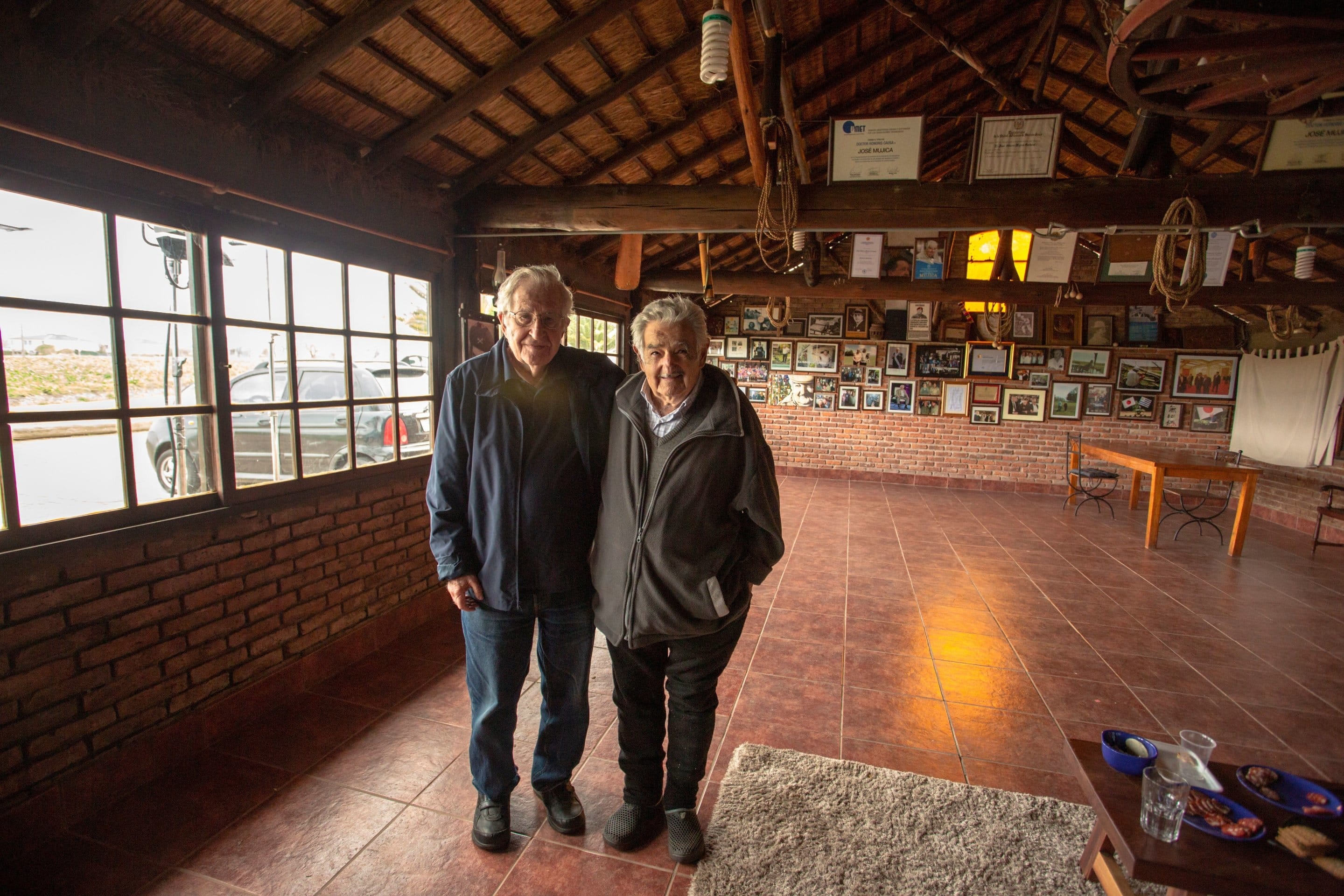 Noam Chomsky and José Mujica: A conversation about politics, freedom and love. Part 2

Second part of the conversation with Saúl Alvídrez, the director of the documentary "Chomsky and Mujica", who brought together in one conversation two of the…

This is the second part of the interview with Saúl Alvídrez, director of the documentary "Chomsky and Mujica," where we will see the conversation that the great academic and the former Uruguayan president had in 2017, when Chomsky visited Mujica at his home in Montevideo.

In this second part we talked with Alvídrez about the post-production of the film, Chomsky's and Mujica's proposals to overcome the great challenges of the 21st century and the more human aspects of the two of them: Mujica's poetry, Chomsky's humor, love and life.

“Chomsky and Mujica" is expected to premiere in March 2020. Those who want to contribute to the project can do so through this crowdfunding campaign. The first part of the interview is available in this link.

How long were they together in total? Two days?

Yes, one weekend and then, on Monday, Pepe wanted Noam to give a short lecture of one hour or one and a half hours. The time we spent together allowed us to collect between fifteen and twenty hours of material and now what we are doing is postproducing it to make a a film of an hour and a half. However, as there is so much material, I think we also need to make a longer version. Since I have so much material that I find to be so valuable, every time I cut something I feel like I've cut off a finger.

Basically, in this hour and a half of the short version, what we do is an introspective analysis of what is life, love, death, freedom, happiness. And in the more intellectual analysis, for example, the geopolitical analysis, I put it aside a bit (I want to take it for the second, longer version) and I focus more on concepts, such as what democracy is, what the economy is, what a more sustainable, more human economy would be.

We focus a lot on the climate crises, on the ecological, economic, political and social sustainability of our civilization and also focused on a direct message from these two characters to the young people telling them what these next thirty years are going to be like, which they may not see, but they consider it indispensable to fight and they more or less outline some guidelines of how we can face it as young people.

What did they propose?

Basically, what they propose is that we become part of a cooperative economy and that we fight to achieve participatory democracy.

It is a more organic conception of the way society behaves, everything is connected.

Yes, that's right. It is a very holistic, organic analysis of everything they represent. We try to get most of the message out of them. They are both characters of great wisdom, with a lot of experience, an enormous knowledge and apart from that they are great communicators, so there was a lot to talk about with them. And everything was touched on, but fundamentally we wanted to borrow their fundamental messages to the youngest.  After all, this documentary is made by and for the younger generations. 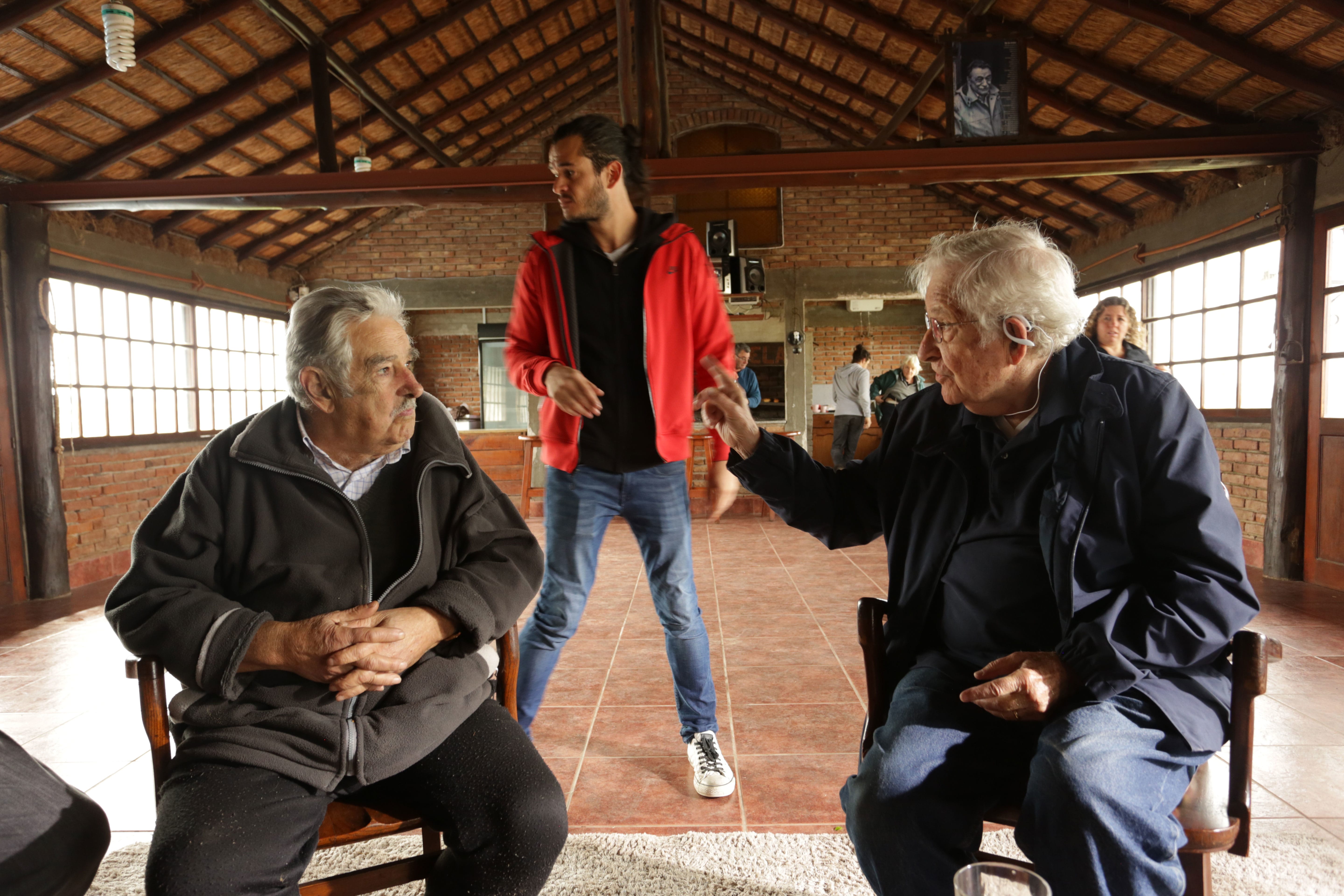 Christina Aguilera to get a documentary about her life
November 13th, 2022
'Bosé' the series premiers on Paramount+
November 4th, 2022
Camilo documentary comes to HBO Max in November
October 21st, 2022
Both are very eloquent, but Mujica has a way of speaking that tends to move people a lot, it's something that is immediately associated with him, but in Chomsky's case it's not so obvious. What did you find moving about one as much as the other?

Indeed. The two have very different styles, although both are exceptional communicators. I say that Pepe is a village poet philosopher because he has the ability to say the deepest question with the simplest words and an incredible poetic touch. He has that ability.

Noam, on the other hand, is a character who... for example, if you read material from him about linguistics, it's something tremendously complex, but the whole political issue, when he approaches his political, social, historical reflections, he does it in a very simple, very didactic way. After all, he is a teacher who has given more than sixty years of classes. So he is very didactic, very organic, very dynamic, his answers tend to be long, very concrete and with many examples.

So they have very different styles. Unlike Pepe, Noam is much more intellectual than that colloquial poetics that Pepe uses. In fact, Noam is a person who all his life has been very hermetic about his personal issues. He doesn't allow you to move much from your intellectual field to your personal field. However, the meeting we managed to have at Pepe's house, where both their wives were and ate together, a much more intimate situation than a cold interview, also allowed us to see a facet of Noam where he talks about his personal life that we had never seen before. And we also see a facet of a Noam with a great sense of humor, a facet of Noam very much in love with his wife, Valeria. There are certain elements of the relationship he has with his wife and of his own sense of humour that I didn't know about Noam, that were a surprise to me and that will undoubtedly be a surprise to everyone who watches this film.

What surprised each of you about the encounter with the other? Were you able to talk to them after the encounter?

Yes, I did have the opportunity to talk to them later, separately. They were very happy that the meeting had taken place, they have enormous, enormous respect for each other. And we definitely managed to give both of them a very pleasant moment, some very interesting talks... they both wanted to ask each other certain things, they were able to do it and in that sense they were very happy with the meeting.

In addition to the topics of geopolitical analysis, democracy and economy, they talked about death, freedom, old age, love... tell us one of the ideas about those topics that caught your attention.

Among all the themes you mention, there is one particular that is one of Pepe's strongest themes and for me it is central to this film. Pepe talks about having a life with meaning. He says that, unlike a lettuce, a cucumber, an apple, a tree or a cow, human beings can, relatively speaking, give direction to their lives, decide why to live and how to live. Pepe talks a lot about giving meaning to your own life, which you control. Because if you don't, it will be controlled by the market or it will be controlled by social circumstances, which in the end are there to keep us in a pen locked up and depriving us of our freedom, consciously or unconsciously; consumerism, in fact, is an unconscious way of depriving us of freedom.

Pepe says a lot that we must reflect and be able to find ourselves and give meaning to our life: decide what we want to make of it because otherwise it is the market that will decide for us.