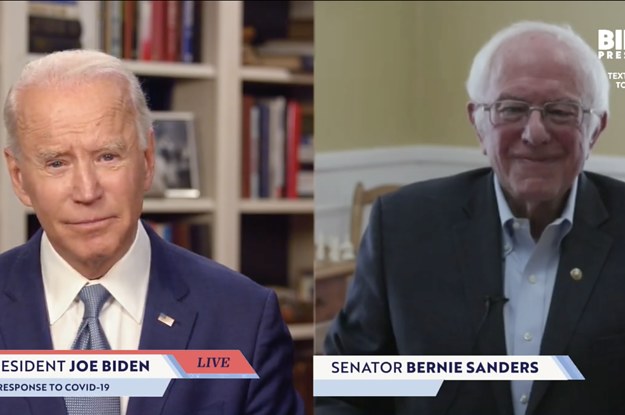 Joe Biden is joined on a live stream for his campaign by Bernie Sanders.

What does Bernie Sanders endorsement of Joe Biden mean for his challenge to Donald Trump?

The Vermont Senator called the current president “the most dangerous” in the country’s modern history.

A week ago, the last challenger to former Vice President Joe Biden for the Democratic presidential nomination dropped out of the race. Now, Bernie Sanders, the Senator from Vermont, has endorsed Biden in his presidential bid against Donald Trump.

The announcement was made during a live stream event held by Biden’s campaign.

He went on to call his opponent in November “the most dangerous president in the modern history of this country.”

Those sentiments towards Trump are likely the reason for Sanders’ early exit and endorsement of Biden.

While cultivating a whole new generation of voters that brought a slew of new issues to the national political conversation, not all of the Vermont Senator’s supporters have historically supported the Democratic Party’s choice for president.

In 2016, when Sanders battled Hillary Clinton to the very end at the Democratic National Convention, one in 10 of those who voted for him in the primaries went on to cast ballots for Trump in the general election.

Given Sanders’ early endorsement of Biden, the ball is now in the former Vice President’s court to sell his vision to members of Sanders’ “movement,” as he characterized it in a message after the Vermont Senator dropped out.

“Bernie’s done something rare in politics,” said Biden. “To your supporters: I see you, I hear you… I hope you will join us. You are more than welcome. You’re needed.”

Still, Sanders has said he will remain on the rest of the state primary ballots to collect delegates in hopes of having a big say in the party’s messaging following the Democratic National Convention, whenever it happens.

Some of those issues he could force into the Democratic approach in November are the same he’s forced into the national discussion for the past four years.

When he announced the suspension of his campaign, Sanders celebrated spotlighting the need for accessible healthcare and higher education along with fighting for a $15-an-hour minimum wage and wealth tax.

“It was not long ago that people considered these ideas radical and fringe,” he said.

So far in his campaign, Biden has not backed Sanders’ Medicare for all movement, student debt cancellation or wealth tax.

He’ll probably need to change his stance on at least one to win over some of Sanders’ supporters, especially his former national press secretary, Briahna Joy Gray as highlighted by Fox News.

Since her candidate dropped out, Gray has taken to Twitter to say she wouldn’t follow with her own endorsement.

The Trump re-election campaign will not be as kind.

It seems as though the Biden-Trump matchup is one the country’s been prepped for since even before any primary took place.

Back when the president found himself embroiled in impeachment, one of the many defenses he spread in the social media sphere for his alleged quid pro quo with Ukrainian President Volodymyr Zelensky was that Biden did the same years before as Ukraine erupted in civil war.

Members of Trump’s administration also attempted to draw a line between Biden’s actions and his son’s place on the board of Ukrainian energy company (Burisma Holdings).

At the time, Biden was the frontrunner for the Democratic nomination and was within the president’s crosshairs. He’s there again as the presumptive nominee.

But even though the Trump administration seems to have predicted Biden as its opponent in November, they did get one thing wrong.

In response to Sanders endorsing his opponent, Trump was quick to point out that Biden’s former colleague in the White House had yet to endorse him for president.

“There’s something he feels is wrong,” said Trump.

In a video released on April 14, Obama endorsed Biden for president.

I’m proud to endorse my friend @JoeBiden for President of the United States. Let's go: https://t.co/maHVGRozkX

"Choosing Joe to be my Vice President was one of the best decisions I ever made, and he became a close friend," Obama said. "And I believe Joe has all the qualities we need in a president right now. He’s someone whose own life has taught him how to persevere; how to bounce back when you’ve been knocked down."