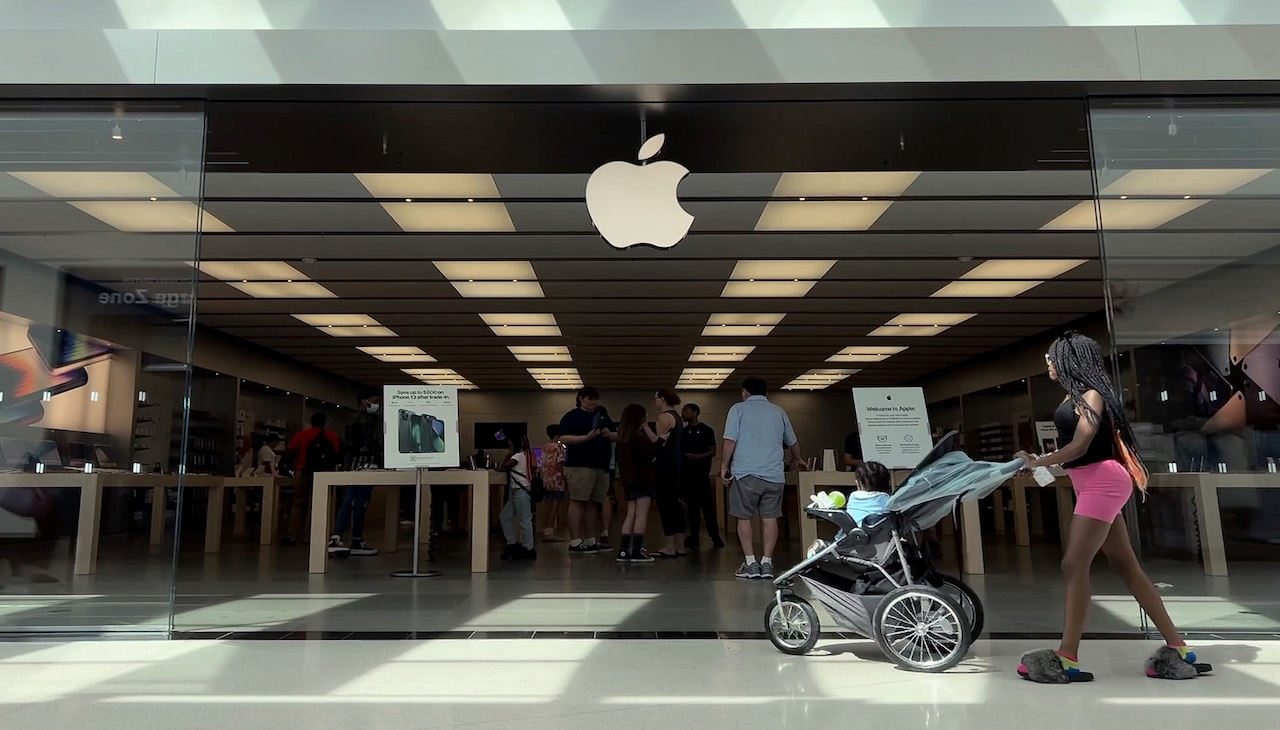 The Apple store in Towson, Maryland is the first in the U.S. to successfully vote for unionization. Photo: Chip Somodevilla/Getty Images.

The election took place on Saturday, June 18 in Towson by a vote of nearly two-to-one.

As several Apple stores across the country are fighting for their right to unionize, employees in Towson, Maryland became the first to win formal recognition.

The landmark election took place on Saturday, June 18, with nearly two-to-one margin in favor of the union. Of the 110 eligible employees, 65 voted yes, and 33 voted no.

That feeling when ⁦you form the first union at Apple in America. Congrats, ⁦@acoreunion⁩!

Welcome to the Machinists Union! #1u pic.twitter.com/U7JzwXcoz7

This historic win has glaring similarities between the victories of Amazon and Starbucks workers. They emerged triumphant despite costly and aggressive union-busting tactics on behalf of these corporate giants.

In May, Deirdre O’Brien, the trillion-dollar tech company’s vice president of people and retail, sent a video to 58,000 retail staff members, warning them about the perceived downsides of joining a union.

“I worry that because the union would bring its own legally mandated rules, that would determine how we work through issues. It could make it harder for us to act to swiftly address things that you raise,” O’Brien said.

BREAKING: Apple's head of retail Deirdre O'Brien sent an anti-union video to all of Apple's retail stores in the U.S. on Tuesday.

In the leaked video, she falsely claims that if workers unionize, Apple may not be able to provide "immediate, widespread" benefits going forward. pic.twitter.com/lqREw5kZcJ

Meanwhile, a store in Atlanta, Georgia was scheduled to be the first to hold a union election, but the organizers withdrew their request, alleging that Apple was using illegal union-busting tactics against them, such as “captive audience” meetings.

When the organizers first filed for an election, 70 out of 100 Cumberland Mall store employees signed union authorization cards. Since then, Apple raised retail pay to a $22 per hour minimum, a raise of $2.

Now, the Towson store will be represented by the International Association of Machinists and Aerospace Workers (IAM) and they are referring to themselves as the Coalition of Organized Retail Employees (CORE).

"I applaud the courage displayed by CORE members at the Apple store in Towson for achieving this historic victory. They made a huge sacrifice for thousands of Apple employees across the nation who had all eyes on this election,”  IAM International President Robert Martinez said in a statement.

When they first made their unionizing intentions known, they penned a letter to Tim Cook, Apple CEO.

BREAKING: In a historic victory, Apple Store employees in Maryland win the first union at Apple.

Despite a nationwide anti-union campaign by Apple management, workers voted overwhelmingly 65-33 to unionize with @machinestsunion. pic.twitter.com/y9ysRGQpQ1

“We have come together as a union because of a deep love of our role as workers within the company and out of care for the company itself. To be clear, the decision to form a union is about us as workers gaining access to rights that we do not currently have,” the letter read.

As the first Apple store in the U.S to successfully unionize, the Towson workers have the potential to ignite a movement for Apple stores in other states.

The New York Times reported that over 24 Apple stores have expressed interest in organizing, including the NYC location in Grand Central Terminal.

Christie Pridgen, a tech expert at the store and one of the Towson organizers, told CNN that the major issue driving the organizing efforts was the desire for workers to have a say in how the store is run.

"Compensation is important, considering the cost of living in general and inflation, but the bigger thing is having a say. That was the most important thing to me,” Pridgen said.

Pridgen, who has worked at the store for 8 years, said workers want to have a say in hours and scheduling, as well as safety protocols.

The Apple store victory follows the union win at an Amazon warehouse in Staten Island, New York, the first Amazon facility to do so. There have also been an impressive string of union wins at Starbucks locations nationwide since late last year.

TAGS
redefo5637
Making money online more than $15k just by doing simple work from home. I have received $18376 last month. Its an easy and simple job to do and its earnings are much better than regular office job and even a little child can do this and earns money. Everybody must try this job by just use the i nfo on this page.

Go to home tab for more details.☛☛☛ 𝗪𝘄𝘄.𝗦𝗺𝗮𝗿𝘁𝗣𝗮𝘆𝟭.𝗰𝗼𝗺
leheson458
I am paid over 💵 $ 60 USD to 💵 $ 90 USD per hour to work online. I heard about this job 3 months ago and after joining this one I easily earned 💵 $ 21,000 USD without having any online working skills. Just try it on the support site… 𝗪𝘄𝘄.𝗦𝗺𝗮𝗿𝘁𝗝𝗼𝗯𝟭.𝗰𝗼𝗺
hijob85671
I’m making over $17k a month working part time. I kept hearing other people tell me how much money they can make online so I decided to look into it. Well, it was all true.
This is where i started… 𝐰𝐰𝐰.𝐑𝐢𝐜𝐡𝐣𝐨𝐛𝐳.𝐜𝐨𝐦
hanaral547
𝐈 𝐠𝐞𝐭 𝐩𝐚𝐢𝐝 𝐦𝐨𝐫𝐞 𝐭𝐡𝐚𝐧 $𝟗𝟎 𝐭𝐨 $4𝟎𝟎 𝐩𝐞𝐫 𝐡𝐨𝐮𝐫 𝐟𝐨𝐫 𝐰𝐨𝐫𝐤𝐢𝐧𝐠 𝐨𝐧𝐥𝐢𝐧𝐞. 𝐈 𝐡𝐞𝐚𝐫𝐝 𝐚𝐛𝐨𝐮𝐭 𝐭𝐡𝐢𝐬 𝐣𝐨𝐛 𝟑 𝐦𝐨𝐧𝐭𝐡𝐬 𝐚𝐠𝐨 𝐚𝐧𝐝 𝐚𝐟𝐭𝐞𝐫 𝐣𝐨𝐢𝐧𝐢𝐧𝐠 𝐭𝐡𝐢𝐬 𝐈 𝐡𝐚𝐯𝐞 𝐞𝐚𝐫𝐧𝐞𝐝 𝐞𝐚𝐬𝐢𝐥𝐲 $𝟏𝟎𝐤 𝐟𝐫𝐨𝐦 𝐭𝐡𝐢𝐬 𝐰𝐢𝐭𝐡𝐨𝐮𝐭 𝐡𝐚𝐯𝐢𝐧𝐠 𝐨𝐧𝐥𝐢𝐧𝐞 𝐰𝐨𝐫𝐤𝐢𝐧𝐠 𝐬𝐤𝐢𝐥𝐥𝐬 . 𝐒𝐢𝐦𝐩𝐥𝐲 𝐠𝐢𝐯𝐞 𝐢𝐭 𝐚 𝐬𝐡𝐨𝐭 𝐨𝐧 𝐭𝐡𝐞 𝐚𝐜𝐜𝐨𝐦𝐩𝐚𝐧𝐲𝐢𝐧𝐠 𝐬𝐢𝐭𝐞…

Open The Link———–>>> 𝘄𝘄𝘄.𝗡𝗲𝘁𝗖𝗮𝘀𝗵𝟭.𝗖𝗼𝗺
salav20994
I am making $165 an hour working from home. I was greatly surprised at the same time as my neighbor advised me she changed into averaging $ninety five however I see the way it works now. I experience masses freedom now that I'm my non-public boss.
That is what I do__________ 𝐖𝐖𝐖.𝐏𝐀𝐘𝐒𝟏𝟏.𝐂𝐎𝐌
naveso6452
Fantastic work-from-home opportunity for everryone...Work for three to eight hrs a day and start getting paid in the range of 13,000 to 19,000 dollars a month...Weekly payments...And best thing is..It's so Easy...