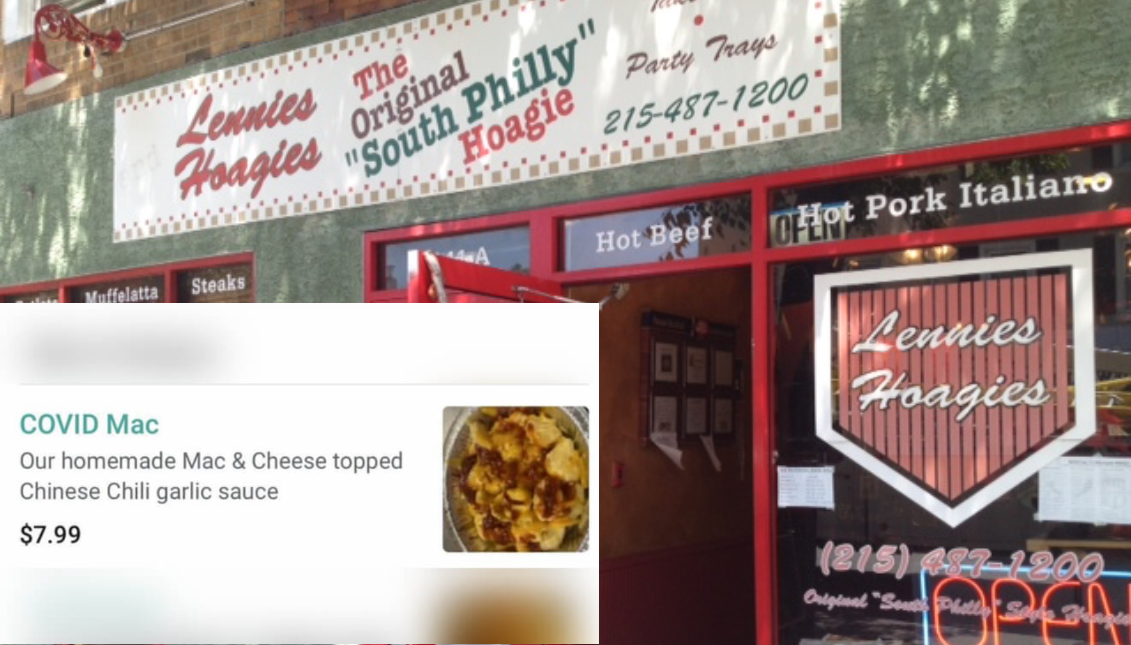 Lennie’s Hoagies in Roxborough had an item called COVID Mac that was topped with Chinese chili garlic sauce.

A restaurant in the Roxborough neighborhood of Philadelphia is facing backlash for a racially insensitive menu item. Lennie’s Hoagies named their homemade macaroni and cheese dish, “COVID Mac,” in reference to the Chinese chili garlic sauce it is topped with.

The organization Stop AAPI Hate has reported more than 3,000 violent attacks on Asian Americans since the start of the pandemic.

Racism against Asian Americans has a long history in the United States, but the xenophobic rhetoric of former President Donald Trump contributed to the uptick in hate crimes.

Trump referred to COVID-19 as the “China virus” and “Kung Flu,” essentially blaming an entire country for a pandemic that every single continent has suffered from. His rhetoric stoked the flames of anti-Asian racism that already existed in the country, and resulted in brutal attacks and deaths, many of them against senior citizens.

“It emboldened them to just come out and do whatever. Because ‘Hey man, the leader of the free world is telling us it’s okay,’” he said.

Regardless of the restaurant’s intention, deliberately naming a menu item “COVID Mac” simply because the dish contains a Chinese sauce, is racist, especially given the increase in anti-Asian violence.

Found out this morning that a hoagie place in Philly called Lennie's Hoagies has a dish called "COVID Mac" so named because it has Chinese ingredients. Do better. https://t.co/fhptSQ0Hse pic.twitter.com/8Q7aEGydQ5

Jerry Won, CEO of Just Like Media, called the restaurant to complain about the menu item, stating that it’s not the use of Chinese chili that is problematic, but that the name choice perpetuates racism.

Won’s complaint was not well received by the person who answered the call.

Apparently, Lennie’s Hoagies kept the menu item but dropped the name after it received media attention. The person speaking to Won cited the change and asked: “What’s the big deal?”

“I said the big deal is that it’s already been done and the news is out there, so would you guys like to apologize for what you’ve done because it’s hurting our community right and now, and our community is hurt, and she refused,” Won told CBS3.

On Instagram, Won posted the phone number for Lennie’s Hoagies, encouraging people to call in and complain.

“Bad reviews won’t hurt, Yelp will take it down. CALL THEM,” he wrote.

Nydia Han, 6ABC’s consumer investigative reporter, called the restaurant, and was able to get a hold of the owner, and was hung up on when she asked him if he understood why the word choice was offensive.

“I don't even know what to say about this,” Han wrote on Twitter.

I don’t even know what to say about this. Lenny, the owner, says he took it down when he realized it was offensive & received threats. I asked Lenny if he understands WHY it was offensive and he hung up on me. #nowords #ThisIsAmerica pic.twitter.com/H5svRjN9Zf

While Lennie’s Hoagies has reportedly removed the item from its menu following the outrage, the restaurant has yet to address the issue publicly.

City officials say they have received several complaints about the incident, but remain limited in any punitive actions, as the incident, while offensive, did not break any city laws.

In a statement, city officials said: “Racism in any form cannot be tolerated, and we hope that this business will issue an apology to the community members who have been harmed.”