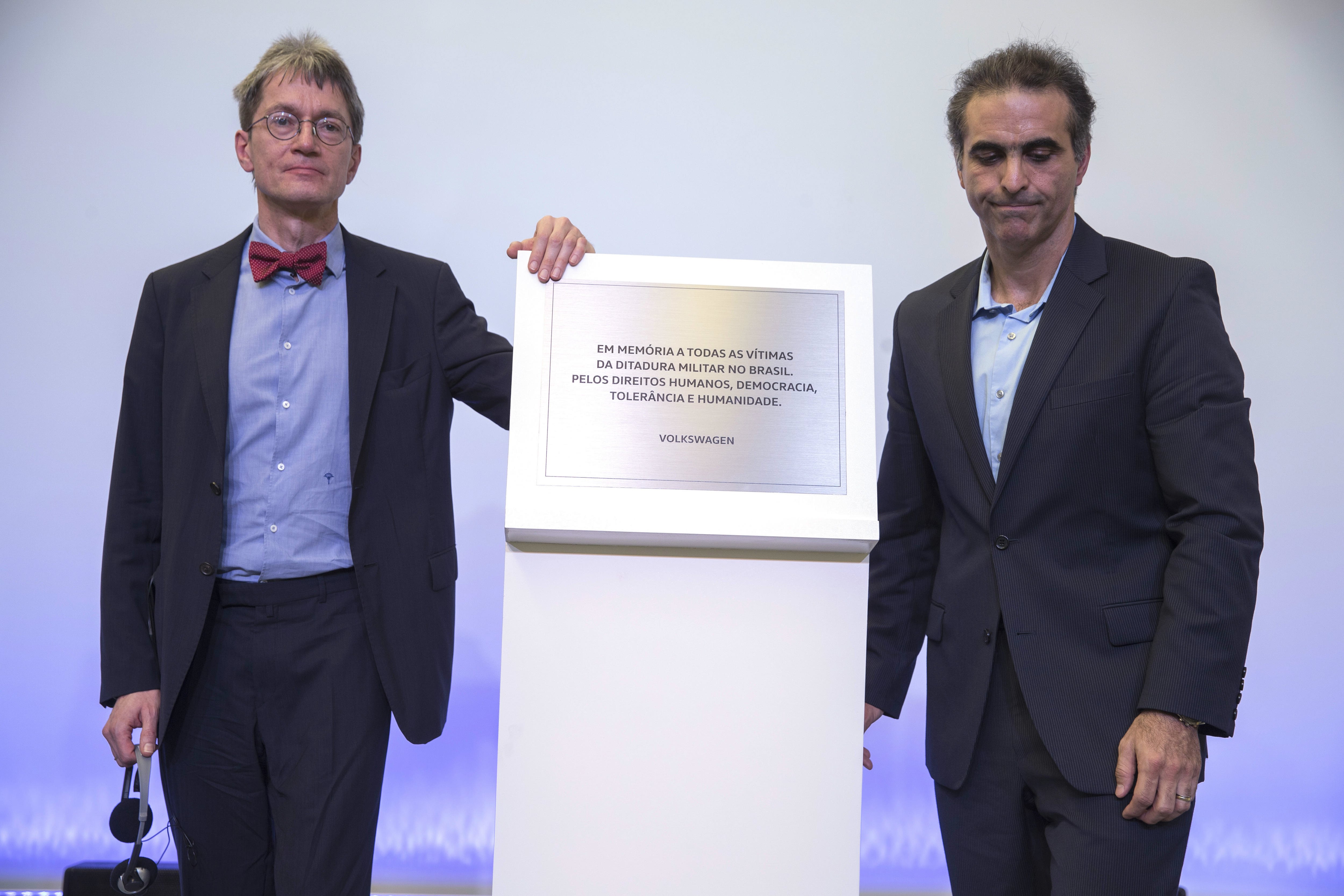 German historian of the University of Bielefeld Christopher Kopper (L) and the President of Volkswagen in Brazil Pablo Di Si (R) uncover a plaque in memory of the victims of the last Brazilian military dictatorship, during the presentation of a report on…

The Brazilian unit of Volkswagen "exhibited unreserved loyalty towards the military government" that ruled the South American country between 1964 and 1985,…

The Brazilian unit of Volkswagen "exhibited unreserved loyalty towards the military government" that ruled the South American country between 1964 and 1985, according to a report commissioned by the German automaker and released Thursday.

VW do Brasil shared the "economic and domestic policy goals" of the junta, University of Bielefeld historian Christopher Kopper concluded.

Kopper was present for the presentation of the report at VW do Brasil's complex in the Sao Bernardo do Campo, near Sao Paulo, along with VW's vice president for South America and Brazil, Pablo Di Si, who said that the company fully accepted the findings.

"We have nothing to hide. We went to the (Brazilian) Attorney General's Office and delivered the report in an honest and transparent way," he said, adding that he "deeply regretted" the events recounted in the paper.

In preparing the document, "VW do Brasil in the Brazilian Military Dictatorship 1964-1985," the historian was given unfettered access to files of the subsidiary and at VW world headquarters in Wolfsburg, Germany.

How banned books were saved from the dictatorship
September 23rd, 2022
January 23 in Venezuela: mass protests take to the streets
January 23rd, 2019
The Bolsonaro phenomenon: Brazil sets the pace for the new international political scene
October 29th, 2018

VW do Brasil played no role in the overthrow of the democratic government, but the company "adjudged the military coup of 1964 and the establishment of an increasingly repressive military dictatorship to be an unambiguously positive development," Kopper wrote.

And while the management board in Wolfsburg "was aware of the political and social repression in the military dictatorship thanks to the credible reporting on it by German media, it accepted and trivialized the situation as being inevitable, based on a colonialist perspective," the historian found.

In terms of active collaboration with the junta, Kopper said that VW do Brasil's security department, under the direction of Brazilian army veteran Ademar Rudge, worker with the regime's DEOPS secret police from 1969-1979.

The professor said he did not find evidence to support the suspicions of the Brazilian truth commission that VW do Brasil aided in the creation of a torture center.