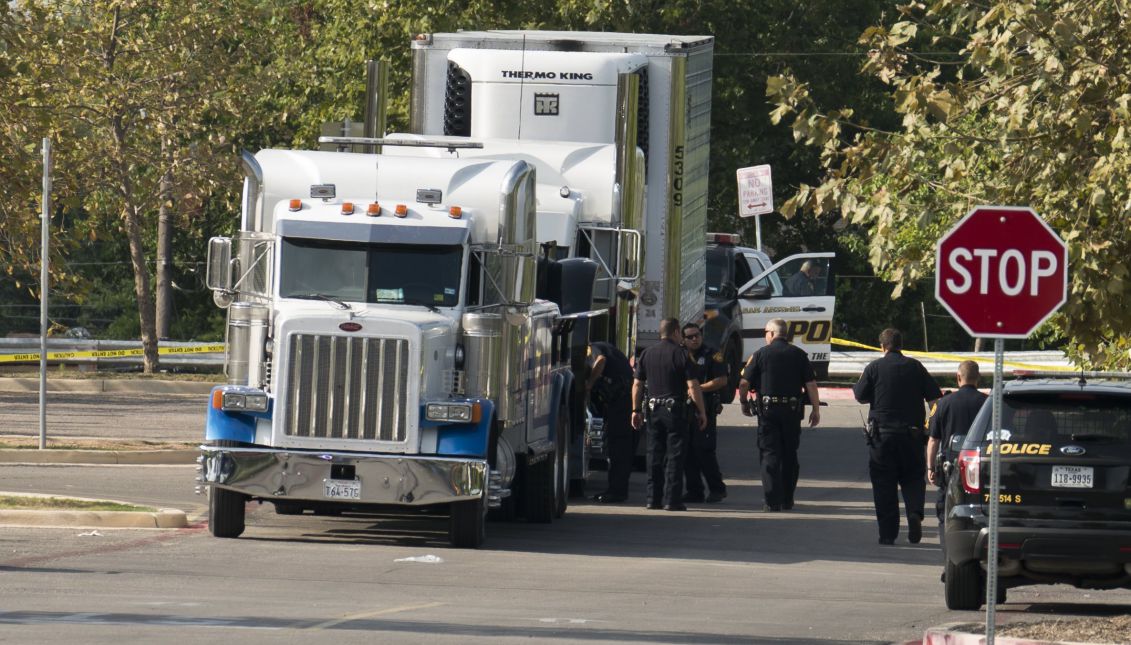 Photo taken on July 23, 2017, of the tractor-trailer without air conditioning found in San Antonio, Texas, to contain 38 suspected undocumented immigrants, of whom the 10th died on Monday, July 24, in a San Antonio Hospital. EFE/Darren Abat

Among the dead was a so-called Dreamer, a migrant brought to the United States as a young child. Another 30 undocumented immigrants packed in the trailer were…

The number of immigrants who died while packed inside a tractor-trailer without air conditioning in the baking heat of this south Texas summer increased to 10 on Monday, as another died in a San Antonio hospital, authorities said.

Local media reported that the US Attorney's Office said a 10th person passed away in this "horrific tragedy," as San Antonio Police Chief William McManus called it.

Meanwhile, the truck's driver, James Bradley, told investigators that he had no idea there were any people in the trailer.

Early Sunday morning police found the lifeless bodies of eight immigrants inside Bradley's tractor-trailer in a Walmart parking lot in the south Texas city of San Antonio, after an employee reported that an apparently dazed, disoriented person had asked for water.

Among the dead was a so-called Dreamer, a migrant under legal protection of  DACA (Deferred Action for Childhood Arrivals), a law approved by former president Obama that gives legal status to migrants brought to the United States as a young child. As reported in LA Times, Frank Guisseppe Fuentes, 20, spent much of his life in the U.S. and had crossed the border in an attempt to reunite with family members living in Maryland after he was deported to Guatemala City. The information was provided by Jose Barillas, the Guatemalan consul general in Houston, as reported in Univision.

Barillas said Fuentes had lost his DACA protected status after committing crimes, althoug he did not mention the specific crimes.

Another 30 undocumented immigrants packed in the trailer were still alive but gasping from the lack of oxygen and the sweltering heat. They were taken to nearby hospitals where 17 are in critical condition

One of the migrants died Sunday afternoon in hospital, US Immigration and Customs Enforcement (ICE) said.

Truckdriver Bradley, 60, the only person detained Monday, testified to investigators that he stopped at a Walmart parking lot in San Antonio to go to the bathroom - and heard banging noises coming from inside the trailer.

He denied knowing there were any people in the trailer until he heard the banging and opened it, the US Attorney's Office of West Texas said, adding that the driver also claimed he tried to help the people inside.

Court documents say, however, that he called his wife but did not call 911 emergency services.

The truckdriver could be tried for illegal transporting of persons resulting in death, a crime punishable by life in prison or or even a death sentence, the US Attorney's Office said.

Local media reported that the driver has a long criminal record that goes back at least 20 years with several prison sentences.

Exactly how many people were traveling in the tractor-trailer has not been determined, though it is known there were more than found by police, since security-camera videos show cars stopping to pick up several people who got out the back of the trailer before the officers showed up.

In that regard, ICE acting Director Thomas Homan said: "To maximize their criminal profits, these human smugglers crammed more than 100 people into a tractor trailer in the stifling Texas summer heat."

"Human smugglers have repeatedly demonstrated that they have absolutely no regard for human life," Homan added in a statement.