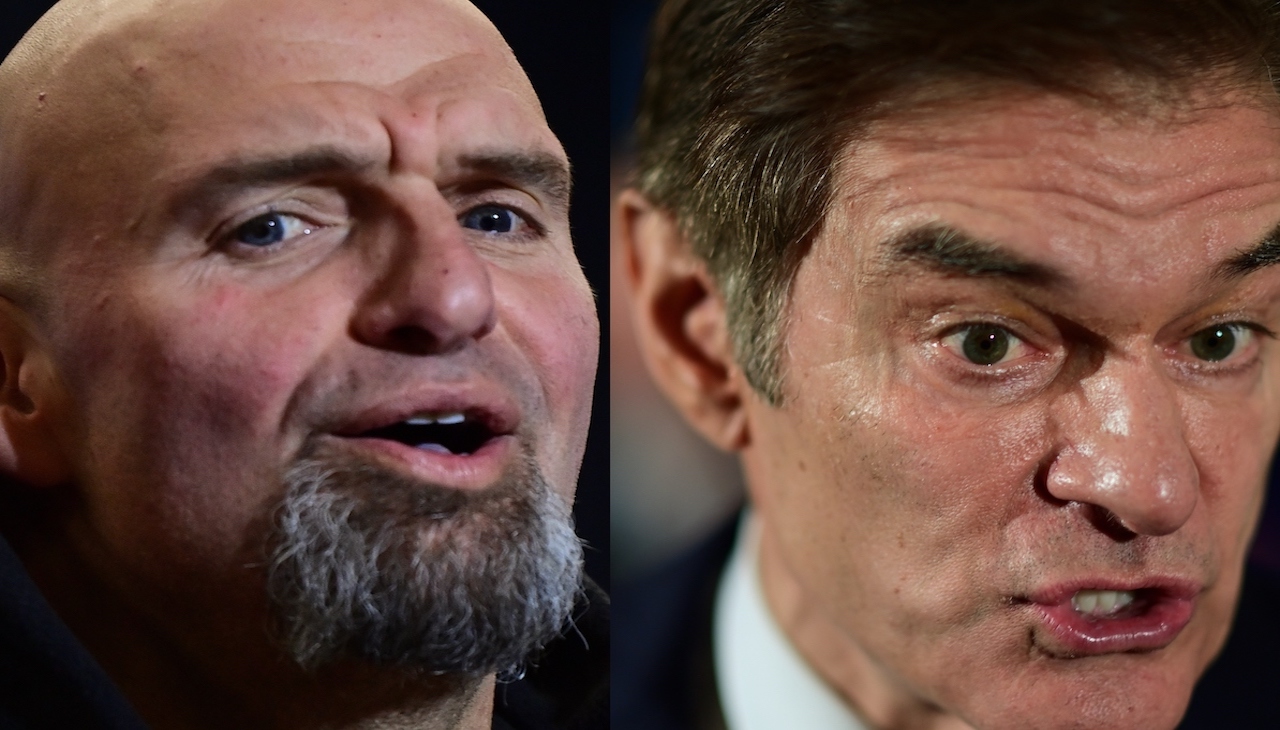 Lt. Gov. John Fetterman and Dr. Mehmet Oz participated in the only Senate debate in Harrisburg ahead of Election Day. Photos: Getty Images

How did Fetterman and Oz fare on top Latino issues during their only debate?

The two PA U.S. Senate candidates sparred over inflation, crime, abortion, and immigration among many other issues on Tuesday night.

On Tuesday night, Oct. 25, Pennsylvania Lieutenant Governor John Fetterman and Dr. Mehmet Oz had the eyes of the entire Commonwealth and country on them during their only Senate debate ahead of Election Day, Nov. 8. The two candidates showed disdain for each other, interrupted one another, and quarelled over a number of issues including crime, abortion, immigration, and others.

It was unusual conditions for a Senate debate as it was held in Harrisburg with no studio audience, and two large monitors behind both moderators with closed captioning to help Fetterman better comprehend the questions as he still deals with auditory issues brought on by his stroke five months ago. It was moderated by WHTM ABC27 News anchor Dennis Owens and WPXI anchor Lisa Sylvester.

According to 2020 U.S. census data, Latinos were the third biggest demographic in PA behind Black and whites at 8.4%, and it has likely only continued to grow. With that growth comes political power, and the Latino population in PA and across the country is now the swing demographic vote both sides are vying for ahead of the midterms, as the country’s political trajectory sits in their hands.

Recent polling shows the economy and inflation, abortion, crime and safety and immigration to be some of the top issues for Latino voters heading into the 2022 election, so where did Fetterman and Oz stack up?

Pennsylvanians across the Commonwealth are struggling to put food on the table and gas in their cars with rising inflation. It’s also the number one concern for all voters heading into the 2022 elections. A recent poll from The Hill shows that inflation is the biggest concern for voters at 39%.

On the topic, Oz spoke about waste and fraud in the country, and accused Fetterman of trying to raise taxes while not paying his own and saying his own experience as a surgeon make him suitable for making tough decisions. He also stuck to a narrative that would stick throughout the debate of calling Fetterman’s stances “radical.”

“They're out of touch with the values of Pennsylvanians. I can make the difficult decisions as you do in the operating room as a surgeon,” said Oz. “I'll make them cut our budget as well, to make sure we don't have to raise taxes on a population already desperately in pain from the high inflation.”

Fetterman’s rebuttal was to go after Oz’s fame and fortune as a television personality, who has, which he’s long argued in-person and online, make Oz out of touch with the realities of working families in the state. He also spoke on pushing back on large corporate greed before slamming Oz for where he reportedly sources his merchandise.

“We must make sure that we're also pushing back against price gouging. We must be able to make more in Pennsylvania and in America,” said Fetterman. “When he had a choice to make his merchandise, the Oz label, he made it all in China. Who can you believe? The guy that can fight against inflation and push back against corporate greed or somebody that has chosen working in China versus American workers?”

Abortion and reproductive rights have been trigger topics ever since the Supreme Court’s overturn of Roe v. Wade earlier this year. With the future of abortion now in the hands of the states, Oz has said that he is pro life, but supports exceptions in the cases of rape, incest, and when the welfare of the mother is at risk.

Oz was asked whether he would support a U.S. abortion ban, which was recently floated by GOP leadership, but dodged the question.

“I want women, doctors, and local political leaders, letting the democracy that's always allowed our nation to thrive to put the best ideas forward so states can decide for themselves,” he said.

Oz continued and used his experience as a doctor once again as an upper hand over his opponent, and reiterated that the federal government should not be involved and went at Fetterman’s supposed mandate that he would want abortion to be subsidized by taxpayers.

Fetterman reiterated his stance on being pro-choice, said he supports Roe v. Wade and would codify it into law if given the opportunity as a senator.

“I want to look into the face of every woman in Pennsylvania. If you believe that the choice for abortion belongs between you and your doctor, that's what I fight for. He [Oz] celebrated when Roe v. Wade went down and my campaign would fight for it,” said Fetterman. “That was the law of the land for 50 years. He believes that the choice is to be with him and Republican legislators all across this nation. Abortion rights is a universal right for all women.”

Over the course of the race, Republicans have also called Fetterman dangerously soft on crime.

Fetterman responded to those accusations from Republicans and the endorsements for Oz by going over his track record of stopping gun violence during his time as Mayor of Braddock, Pennsylvania when he first ran for office back in 2005.

“I was able to stop gun violence for five and a half years, more than any mayor ever accomplished before since my time. I'm the only person on this stage right now that has been successful in pushing back against gun violence,” he said. “All he's done is just put a plan up on his website in the last 24 hours. He has no experience and has never made any attempt to try to address crime during his entire career except showing up for photo ops here in Philadelphia.”

In response, Oz went at Fetterman’s stance of decreasing crime and disputed his improvement of Braddock, saying it got even worse under his leadership. Oz was asked how he would have voted on a gun control bill passed this past Summer by Congress considering it would not have happened without the support of the man he is trying to replace, Sen. Pat Toomey. It was the first gun control bill passed in decades, and Oz said he supported the parts of it involving background checks and investments in mental health support.

“We have got to get mental health services to these people. And it's not happening now,” he said.

Immigration has been a longstanding issue that has seen little to no resolution for decades and the number of those crossing the border has increased this year. Oz was asked about how in recent times, Republican governors such as Greg Abbott in Texas and Ron DeSantis in Florida have been sending migrants to Democrat-run cities without any notice or coordination, and whether he thought that was an effective way to deal with immigrants.

Vice President Kamala Harris has said that the southern border is secure despite an unprecedented number of migrants crossing currently. Fetterman responded to a question about the border with broad talking points, but also failed to provide any policy solutions.

“I believe that a secure border can be compatible with compassion. We need a comprehensive and bipartisan solution for immigration,” he said. “I don't ever recall in the Statue of Liberty saying ‘you take our tired huddled masses and put them on a bus and use cheap political stunts about them.’”