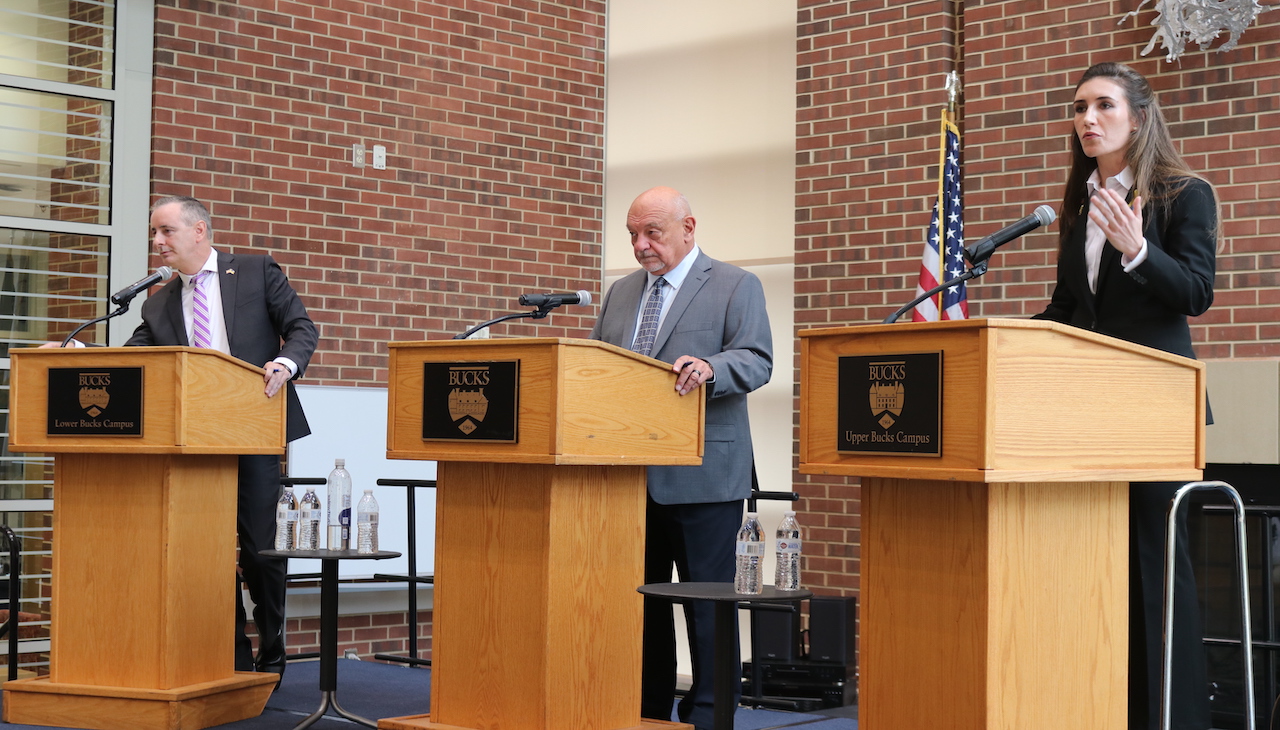 Ashley Ehasz and Brian Fitpatrick sparred over a number of issues in the sole debate ahead of election day, Nov. 8. Photos: Alan Nunez/Al Día News

The two candidates talked abortion, immigration, and other issues at Bucks Community College.

Incumbent Republican Congressman Brian Fitzpatrick and his Democratic challenger, newcomer and former Army Veteran Ashley Ehasz, sparred over a number of critical issues in what was the sole Congressional debate ahead of Election Day on Nov. 8 in PA’s 1st Congressional District.

The 75-minute debate was held in the Student Commons at the Epstein Campus at Bucks County Community College and moderated by Professor William Pezza of the Department of Social and Behavioral Studies.

The winner on Nov. 8 will represent all of Bucks County and a part of Montgomery County in Congress, which comprises Pennsylvania’s 1st Congressional District.

“We understand that the single biggest threat to democracy and to our national security is hyper partisanship. As a member of the House Intelligence Committee, where we see the threats up close and personal every day, American democracy will never be beaten external,” said Fitzpatrick. “It can only be taken down from within. That'll be the theme of this debate, you're going to hear a lot of two-party solutions versus single-party solutions as your backbone.” 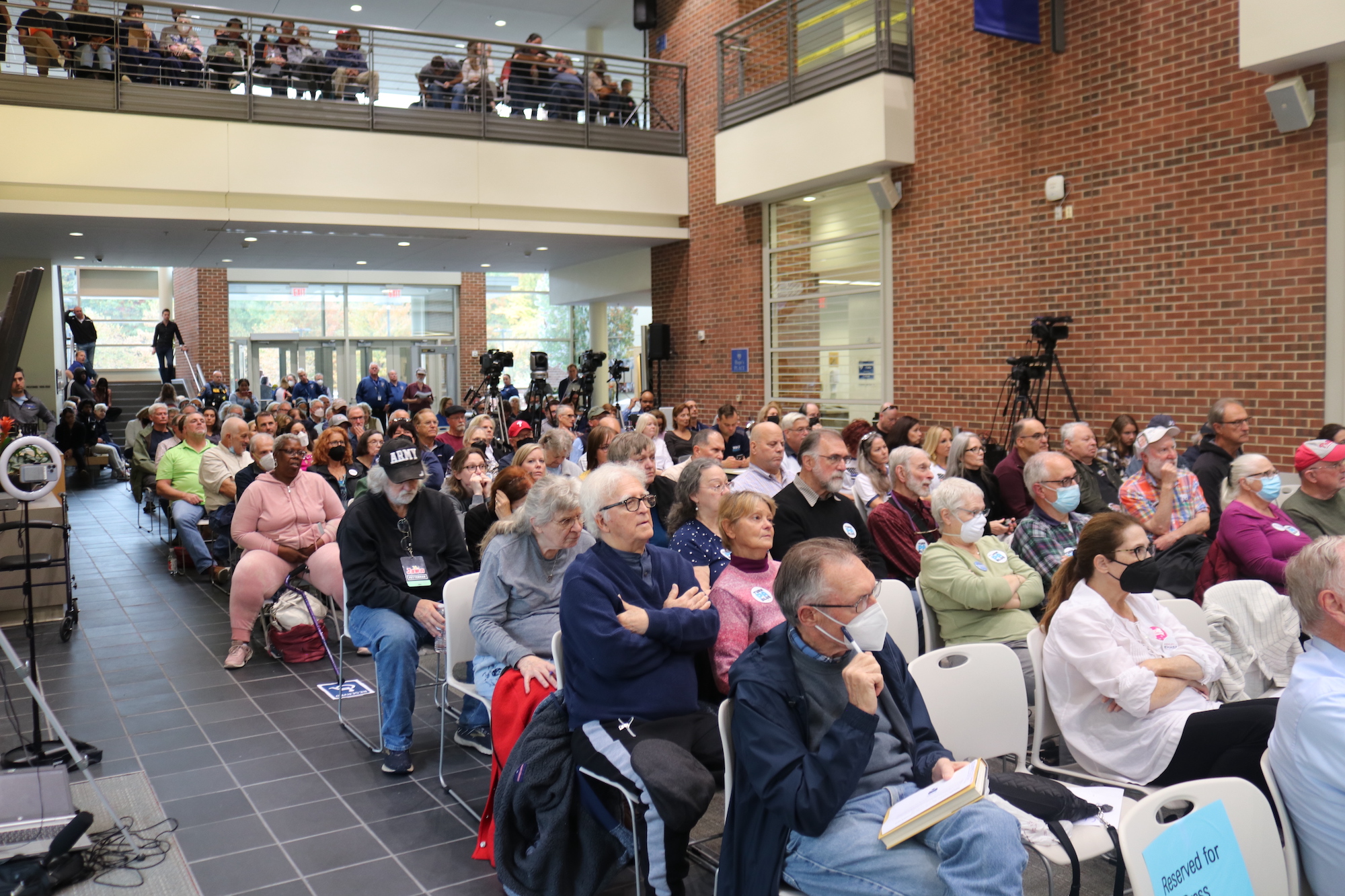 The setting was a packed crowd filled with equal amounts of supporters for both candidates.

Fitzpatrick was pushed about his bipartisan record and current stances on abortion and women's reproductive rights, while Ehasz addressed voters’ skepticism in relation to her newcomer status and explained the policy differences between her and Fitzpatrick over issues such as abortion, immigration, and others.

A former attack helicopter pilot and commander, Ehasz touched on why she is running for office and spoke on her history as an Army veteran and a woman, as two of the many reasons she’s suitable to run for Congress.

“It was in those years,” Ehasz said of her military experience, “where I learned how to make the decision in a crisis and make no mistake.”

“We are finding ourselves in a moment of crisis in our country. There are too many families, living paycheck to paycheck and struggling to afford the basic missing basic necessities,” she continued. “Millions of women, including myself, were made sacrificed citizens with the overturning of Roe v. Wade. And in the year following Jan. 6, we have seen our voting rights, our reproductive rights and our economic rights stripped away from us. That is why I'm running for Congress.”

When it came to abortion, Ehasz labeled herself as a second class citizen because of the Supreme Court’s overturn of Roe v. Wade earlier this year. She spoke on how the loss of abortion protections on the federal level has, and will continue to have a huge affect on women who are at or below the poverty line in the Commonwealth. Ehasz finished her point by also talking about how the overturn affects women in the military, and went at PA Republican Gubernatorial candidate Doug Mastriano.

“The loss of protections has hurt every woman in uniform. We are putting those who have stepped up to serve our country directly in harm's way. And let's be very clear now that Roe is lost at the federal level. We have a candidate for Governor Doug Mastriano, who wants to end it right here in Pennsylvania. From where I'm standing, it doesn't matter if you are one of the same if we do not stand up and fight,” she said. 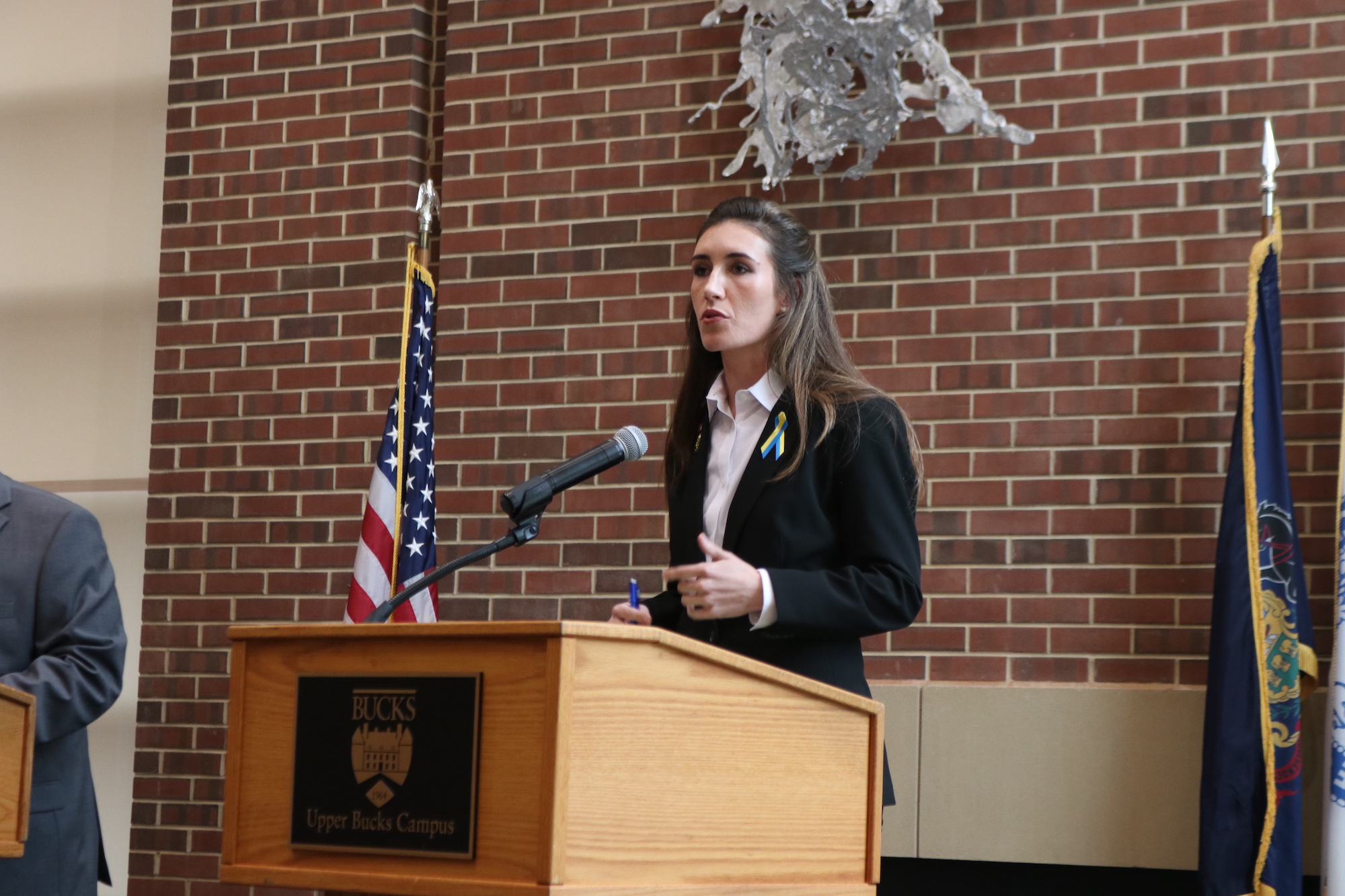 Fitzpatrick responded to the abortion topic by saying that he is not against it, but instead is in favor of certain limits and exceptions. He compared the state’s current limits to that of European countries and made the case that the state is almost in alignment with those European laws.

“Just like most European countries, which are somewhere between 15 and 20 weeks, they support legality in the early stages, but they do believe that limits do not ban absolute limits,” he said. “Pennsylvania, by the way, the law that we've been living with here for decades, is 20 to 24 weeks. In fact, Pennsylvania law has even more restrictions. They have parental consent, parental notification and 24 hour waiting periods.”

When it comes to immigration, little to nothing has changed under both Democratic and Republican administrations. DACA is on the cusp of being erased, undocumented immigrants remain undocumented, borders remain a problem, and policies toward asylum seekers are unspecified.

Much in the same vein as other Republicans when discussing this issue, Fitzpatrick reiterated that more technology and bodies are needed to secure the southern border. He also talked about how along with the many migrants cross the border, some are what he labeled as ‘terrorists.’

“I voted for the DREAM Act. The way we need to fix immigration in this system is to respect the dignity of immigrants. We are a nation of immigrants. But it's got to be legal immigration, with a secure border,” said Fitzpatrick.

He went on to cite 10 people arrested along in the border last week that “suspected terrorists.” 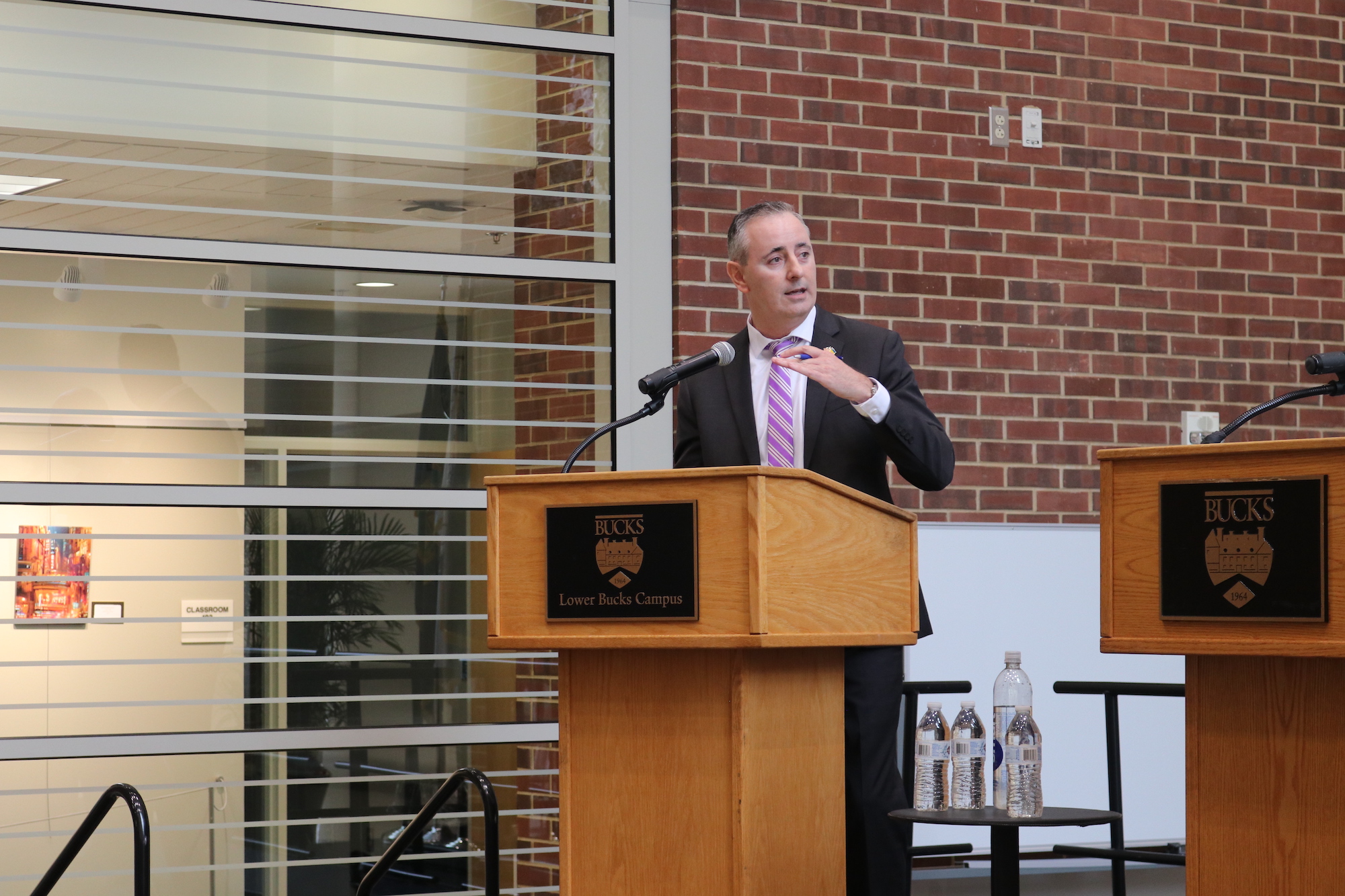 Ehasz touched on her time in service in regards to the immigration topic and spoke on the reality of the situation at hand — there needs to be an update on many of the current immigration laws if anything is to change. Both candidates were seemingly very keen on the idea of allowing those in the country to get sped up in the citizenship process as well as allowing for legal immigration as it brings much needed labor to the country.

“I served with folks of all different types of backgrounds, some joined our military to gain citizenship. As your Congresswoman, I will make sure Dreamers are protected at the federal level by codifying that. We must also create robust pathways to citizenship for those who are in our country. Because we know that a diverse country is not only good for the American dream, but it's also good for our GDP,” she said.

Closing statements consisted of Fitzpatrick retelling a history lesson about how democracy was born in Pennsylvania and that a vote for him means the continuation of only great things for Bucks County and his constituents. Ehasz reiterated her life’s story as one of the reasons to vote for her and it offers a different perspective for the congressional seat compared to Fitzpatrick, who’s held it since 2017.